Home » How e-scooters are driving a crime wave

How e-scooters are driving a crime wave: Drug dealing, hit-and-runs, drive-by shootings – all committed on the trendy new vehicles that are illegal. So WHY don’t police crack down?

Blink and you’ll miss them. Riding silently along our roads and pavements, electronic scooters have been hailed as a ‘transport revolution’, leading zero-emissions travel and decongesting traffic-clogged roads.

But as the Mail reveals today, the trendy vehicles are central to a crime wave sweeping the nation, with robberies, assaults and even a drive-by shooting having been carried out on the devices. They are fast becoming the criminal’s ride of choice.

Yesterday, ministers were urged to ban them amid widespread concerns about their safety.

Research from Transport for London has found that e-scooters could be 100 times more dangerous than bicycles.

Despite this, London’s first e-scooter trial is due to begin on June 7. In cities where they are already available, rented e-scooters have been dumped on pavements, causing a hazard to pedestrians.

Despite their dangers and their ubiquity on our streets, it remains illegal to ride e-scooters on public roads, with anyone who does theoretically facing a £300 fixed-penalty notice and six points on their driving licence — unless the scooter has been hired as part of an official local scheme. Some 50 such schemes have been launched in Britain since last summer. 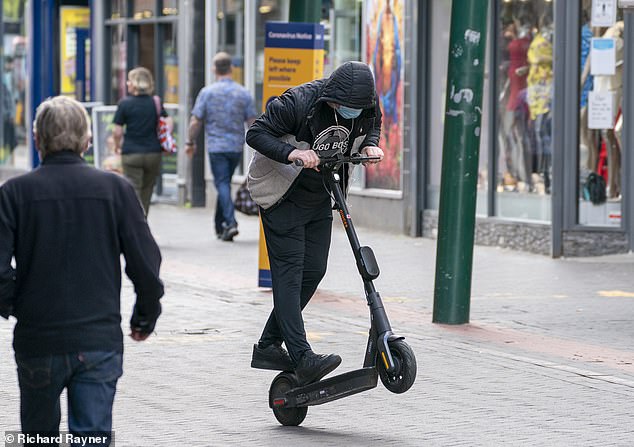 Electronic scooters (stock image) are central to a crime wave sweeping the UK, with robberies, assaults and even a drive-by shooting having been carried out on the devices, the Mail reveals

Nevertheless, sales have boomed, partly because people have wanted to avoid public transport during the pandemic.

Retailer Halfords reported a 450 per cent increase in sales during just one three-week period last year.

Trevor Sterling, partner at Moore Barlow law firm and chair of the Major Trauma Group, which has campaigned for greater safety surrounding e-scooters, said: ‘Two years ago there was a moped crime wave — now it’s moved on to e-scooters, which are cheaper and more accessible.

‘We can encourage people to use environmentally friendly forms of transport, but we mustn’t be rushed into changes that could lead to a change in criminal behaviour.’

While the law scrambles to keep up, these are some of the most shocking crimes involving the new menace on our streets . . . 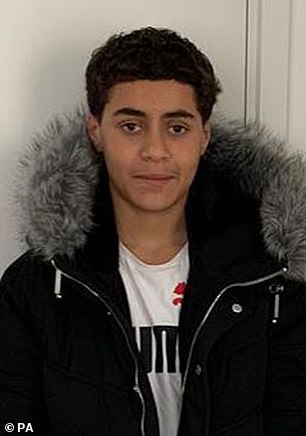 Schoolboy killed and robbed of vehicle

Teenager Fares Maatou was innocently riding an e-scooter on his way home from school in East London on April 23 when he was viciously attacked. The 14-year-old was struck over the head with an iron bar and stabbed in an attack involving five assailants who made off with his e-scooter.

Bystanders attempted to give the schoolboy — who had hoped to become an engineer — first aid, but he was pronounced dead just over 30 minutes after the attack.

Officers would not be drawn on the motive for the attack.

residents of a Coventry suburb were shocked to witness a drive-by shooting carried out in broad daylight by an e-scooter driver.

The man opened fire on an Audi — steering the scooter with one hand and shooting with the other.

Witnesses described seeing the Audi driver try to ram the scooter before the retaliatory shots were fired on a Sunday afternoon in September last year.

Armed police were sent to the scene and two men were arrested after the black Audi was later found at a nearby petrol station.

But the man on the e-scooter — which in some cases can reach speeds of 70mph — escaped and remains at large. 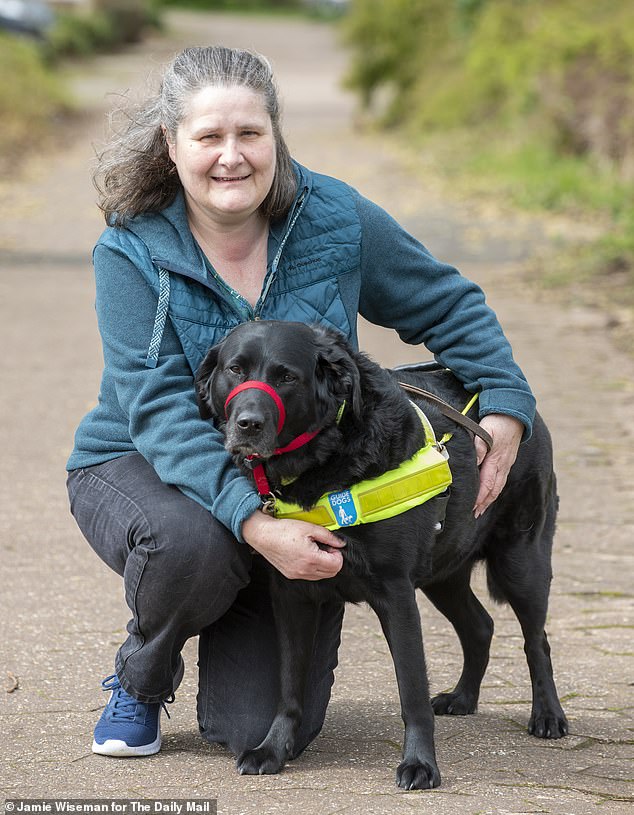 Elaine Maries, 53, and Inca, her Labrador retriever, were sent crashing to the ground outside their home in Milton Keynes, where scooters were being trialled last June

A blind woman fears going outside after two youths on an electric scooter ploughed into her and her guide dog.

Elaine Maries, 53, and Inca, her Labrador retriever, were sent crashing to the ground outside their home in Milton Keynes, where scooters were being trialled last June. She said the two youths riding the vehicle ‘sped off laughing’.

The incident happened as Elaine and Inca walked to a local grocer.

Elaine told the Mail: ‘All I heard was a lot of screaming, and the next thing I knew I’d been hit as they came around the corner very fast, crashing into me.

‘I just couldn’t understand what had happened and you can’t hear the scooters coming because they are electric.’

She was left with a bruised knee and elbow, while poor Inca was so badly bruised she couldn’t walk for four days.

Police told Elaine that due to her partial sighting, there was not enough evidence to press charges.

Chris Theobald, of charity Guide Dogs, said: ‘People are increasingly encountering scooters on pedestrian pathways and blind people have to navigate using their hearing, so it’s a huge problem for them.’

Drugs delivered by dealers on wheels

Police are increasingly seizing e-scooters from drug dealers, while there are even claims older dealers are giving children free scooters to lure them into delivering drugs for them.

Last October, dealers with ‘bags full of drugs’ were using scooters outside Brambleside Primary School in Kettering, Northamptonshire, according to a local councillor.

In another case on the Isle of Wight, an e-scooter rider who had failed to stop for officers was later arrested on suspicion of selling Class B drugs.

And in July, Joy Singarajah, 23, of Walthamstow, East London, was jailed for 15 months after using an e-scooter to deliver cocaine to students at Essex University.

Last summer in Middlesbrough there was a trial for the hire of a fleet of 100 e-scooters — available via a phone app linked to the rider’s bank account.

Children were soon seen joyriding them through the Cleveland Centre shopping mall, forcing pedestrians to jump out of the way.

Others were seen riding the scooters on the pavements without helmets, while some attempted wheelies. Cleveland Police were forced to issue a warning after pulling over two boys, aged 13 and 14, on the busy A19 dual carriageway.

The Mail on Sunday found that checks were not made to confirm users’ age or identity, opening the rental system to misuse. Personal injury lawyer Peter Kelly said: ‘The police should crack down on it.’

Dicing with death on wet motorway 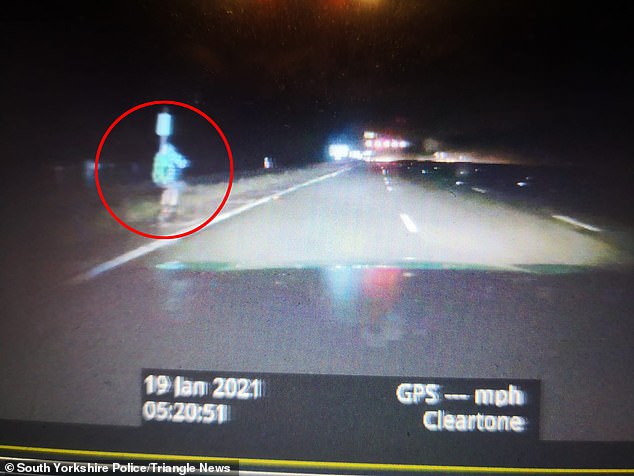 Shocking footage obtained in February showed an e-scooter rider travelling at 50mph, performing wheelies and standing on one leg — all on a dual carriageway

Shocking footage obtained in February showed an e-scooter rider travelling at 50mph, performing wheelies and standing on one leg — all on a dual carriageway.

The driver, sporting a woolly hat rather than a helmet, showed no regard for safety as he brazenly overtook cars near Dundee.

‘He came up behind our car — we didn’t know what it was’, one concerned passenger later told The Times. ‘He overtook us so quickly and we were doing the speed limit — 40mph — so he was obviously going a lot faster. He was . . . showboating all the way along.’

Unbelievably, several e-scooter riders have even been caught driving on the motorway, which carries its own offence.

In January South Yorkshire police described a man riding an e-scooter during a rainy night on the M1 near Sheffield as ‘a recipe for disaster’.

The 34-year-old rider was stopped and his uninsured scooter seized. He is due to face court.

‘It is not only illegal to ride an electric scooter on a motorway, but it is extremely dangerous’, said a police spokesman.

Though e-scooters have a legal maximum speed limit of 15.5mph in the UK, with many unable to travel faster than 12.5mph, videos online show drivers how to ‘hack’ their vehicles, manipulating the devices’ speed-limiting software to travel at speeds of 70mph and even higher.

E-scooters are seen as status symbols — especially among teenagers — and several people have been viciously robbed of them.

One such crime took place last New Year’s Eve, in Basildon, Essex, when a 15-year-old boy was punched in the face before his e-scooter stolen. It came just days after a shop in the town was raided and had £20,000 worth of stock stolen — including a haul of e-scooters.

Essex Police said they were investigating the crime, believed to have been carried out by a boy in his late teens.

But, as with many such crimes, the perpetrator remains at large.

A woman aged 20 made a shameful entry into the record books this year as the first person to be convicted of drink-driving on an e-scooter in Britain.

Kyah Jordan had downed shots of rum with her friends before spontaneously picking up an e-scooter near a drop-off point on the Isle of Wight.

Police in an unmarked vehicle noticed Miss Jordan — who had never ridden one before — heading in their direction, before going through a red light.

They said she ‘narrowly missed a head-on collision’, and officers said that if there had been a crash ‘the driver would have been injured without doubt’.

As Miss Jordan was travelling at only 12.5mph, the officers were able to give chase on foot, and a breathalyser found her three times over the legal drink-driving limit.

When her case came before Isle of Wight magistrates in January, Miss Jordan was banned from driving for two years, handed a community order of 12 months and ordered to carry out 40 hours of unpaid work.

Dozens of drink-driving fines have since been handed out to over-the-limit e-scooter drivers.

A young yoga teacher was knocked into a canal by a passing rider last September and almost drowned. The 28-year-old woman was sent flying into the Regent’s Canal in Hackney, East London, and it is believed the e-scooter rider, who was listening to music on headphones, didn’t even realise what happened.

The woman spent five minutes desperately trying to scramble up the 2ft bank. She then tried to swim to a houseboat, before her heavy bag dragged her under the water. Just in time, a passer-by managed to pull her out.

She was treated in hospital for shock and given a tetanus jab.