Homicide detectives have been called in to investigate a crash that claimed the lives of four young men in Melbourne’s west.

An overloaded sedan was travelling east on Dohertys Road in Truganina when it collided with a small truck near Forsyth Road about 7.30pm on Thursday, September 30. 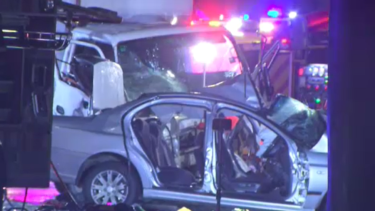 The scene of the crash at Truganina on September 30. Credit:Nine News

At the time, Victoria Police Assistant Commissioner Glenn Weir said the car was carrying six young men aged between 15 and 20, and was being driven by an “extremely inexperienced” and unlicensed 16-year-old.

Mr Weir said the wet conditions, the lack of seatbelt use, and the car having few modern safety features was an “absolute recipe for disaster”.

“There’s a number of people who just think the rules don’t apply to them, and just make really poor decisions to engage in really risky behaviour,” he said.

“What we’ve seen here last night as a result of that is families have been devastated and young lives have been snuffed out.”

Mr Weir said it appeared the car the six young men were travelling in “crossed onto the wrong side of the road, lost control and collided with the truck”, and two of the young men died at the “catastrophic scene” at Truganina.

Another two died as they arrived at hospital, and the remaining two occupants of the car were taken to the Royal Melbourne Hospital in a critical condition with multiple lower and upper-body injuries.

On Wednesday morning, Victoria Police confirmed homicide detectives had been brought in to investigate the crash “due to a number of incidents linked to the victims in the lead up to the collision”.

They did not elaborate on what the incidents were.

They said there was nothing to indicate any culpability on behalf of the truck driver.

“The investigation remains ongoing and further details will be provided when operationally appropriate to do so,” a Victoria Police spokesman said.

A spokeswoman for Royal Melbourne Hospital, where the two occupants of the car were taken in a critical condition, said one remained in hospital in a stable condition.

Police urged anyone with information about the crash to contact Crime Stoppers on 1800 333 000.