Top-level Victorian government officials are increasingly frustrated with the speed at which the state’s public health team is developing a plan out of lockdown, as experts call for more measures to control the spread of COVID-19.

As Victoria battles a growing wave of COVID-19 infections concentrated in Melbourne’s north and western suburbs, NSW is preparing to emerge from its lockdown in mid-October, despite having a larger number of new cases. 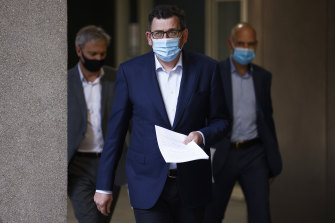 The release on Thursday of NSW’s exit plan, which would allow gatherings and involve retail and hospitality “cautiously” reopening to the fully vaccinated, has put pressure on Victoria to look ahead.

Chief Health Officer Brett Sutton’s team was commissioned last month to produce a Victorian lockdown exit plan. Some government figures expected the work to have been completed by now, allowing the government to create positive incentives for Victorians to get vaccinated.

Instead, Victorians have been told only about a minor easing of restrictions at the 70 per cent first-dose milestone, which will include an extension of the travel limit to 10 kilometres and an increase in exercise time to three hours. There has been no indication of what freedoms will be permitted when 70 and 80 per cent of the population is double-vaccinated.

Three government sources who spoke anonymously to The Age on Thursday said the delays in the release of Victoria’s plan have caused internal angst.

The Department of Health, which employs Professor Sutton, declined to comment.

Premier Daniel Andrews on Thursday acknowledged the frustration of Victorians who wanted to know how the next few months would look.

“I’ve got some draft modelling [but] it’s still got a bit more to go. I know it’s very frustrating, you’d love to be able to turn this around in 24 hours, but they need more data as well,” Mr Andrews said.

The tension comes as health experts said additional measures will be needed to curtail the spread of the virus in Melbourne’s northern and western suburbs. They warned speeding up vaccinations would no longer be enough to stop a projected surge in cases and hospitalisations.

The jump in new infections prompted epidemiologists and the state’s Australian Medical Association to call for incentives to keep people in hotspots in their homes and for essential workers in the north and western suburbs to have their vaccinations brought forward.

“The outbreaks in these areas are really verging on being out-of-control,” Australian Medical Association Victorian president Roderick McRae said.

Health Minister Martin Foley said the government had begun shifting vaccines from other parts of the state into the north and west.

He said there were a number of pop-ups for specific cultures and religions.

“We know, however, that more has to be done.”

Acting Chief Health Officer Ben Cowie said the outbreaks in Melbourne’s north and west were worryingly similar to a fast-moving outbreak that had hit south-west Sydney. 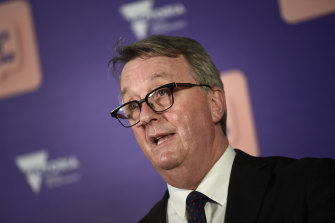 He said the west and north had a higher proportion of essential workers who were unable to work from home, larger families and culturally and linguistically diverse communities who faced barriers to healthcare, contributing to virus transmission.

On average, these suburbs also have more young families, including many people who have only recently become eligible to be vaccinated.

Household spread has been identified as major source of transmission of the virus. Senior government officials, including COVID-19 response commander Jeroen Weimar, have been meeting with multicultural and religious community leaders to encourage increased testing and vaccination.

Head of Monash University’s epidemiological modelling unit, James Trauer, said essential workers in the city’s northern and western suburbs, including people working in supermarkets, should have their vaccinations fast-tracked.

He said those who needed financial assistance should be offered incentives such as paid leave to stay home until they had at least received their first dose, giving them partial protection before returning to work.

“These parts of Melbourne are very unprotected in the critical transmitter age groups and I expect to see the cases really go up in the next couple of weeks,” Professor Trauer said.

“It is pretty scary because the cases are doubling so quickly at the moment, and it’s going to take us a few weeks before we get that protection from the vaccinations.”

Dr McRae said the state government should have vaccinated all essential workers five months ago.

He called for a strict circuit breaker lockdown for seven days, including shutting down all essential services, except medical, to limit movement.

“This would not be a typical lockdown, it would be a freeze to minimise movement and reduce transmission,” he said. “What we have done so far is not working, and it’s not looking peachy.”

However, Deakin University chair of epidemiology Catherine Bennett said shutting supermarkets would only push people to shop in other suburbs, increasing the chances of the virus spreading further.

She also said some households with eight to 10 family members needed several grocery shops a week.

While she agreed a “two-week circuit breaker” was needed, Professor Bennett said the government must consider innovative incentives, such as paying for families to have their groceries delivered instead having to leave home to shop for food.

“It’s about finding alternatives that won’t be sustainable, but could work for the short term,” she said.

Epidemiologist Nancy Baxter said there should be more pop-up clinics, mobile vaccination vans and “immunisation blasts” at mosques and other community centres.

“Community outreach and engaging community leaders is also important,” said Professor Baxter, the head of the Melbourne School of Population and Global Health. “There are groups that may feel targeted, alienated or may have challenges with the English language, so it’s about having communication that is tailored to specific communities.”

Asked if she agreed with the idea that the government should pay for food deliveries, she replied: “every bit might work – it’s all about decreasing movement, especially with the Delta variant. Better masks might also work, as would rapid testing, particularly for essential workers.”

The surge in cases in the north and west comes as Mr Foley announced a clinical trial of a new medical device to swab children to test for COVID-19 at The Royal Children’s Hospital.

The device, Rhinomed Junior, sits at the base of the nose and collects virus particles, and comes in different colours and designs to reduce anxiety for children. About 250 children will trial the device for six weeks.

There are 111 COVID-19 patients in hospital in Victoria, none of which had been fully vaccinated.

Mr Foley said 89 per cent of people in hospital have had no vaccine while 11 per cent had one dose.

Thirty-two people are in intensive care while 19 people require a ventilator.

Meanwhile, in NSW, Premier Gladys Berejiklian announced on Thursday her state would ease restrictions when 70 per cent of the population was double-dosed.

Indoor household gatherings will be allowed and businesses including gyms and pubs will reopen to those who have received two doses.

NSW is forecast to reach the 70 per cent double-dose target by October 17, while it should take until November 12 for Victoria, though these timeframes are likely to shorten as vaccine supply increases.