The Duke and Duchess of Sussex revealed one of their son Archie’s favourite songs as they visited Afghan refugees being housed at a US military base.

Harry and Meghan met the refugees during a trip to Joint Base McGuire-Dix-Lakehurst in New Jersey on Thursday, according to a spokesperson for their foundation Archewell.

More than 10,000 Afghans evacuated when their country fell to the Taliban are being accommodated temporarily at a compound in the base as part of Task Force Liberty.

Harry and Meghan visited a classroom full of children learning English, and spoke to several pupils who practiced phrases such as ‘nice to meet you’.

Meghan was pictured holding up a red pen, as the children shouted out the English words for colours they were learning that day.

The couple were also pictured pointing at their heads as they led the class in singing Head, Shoulders, Knees And Toes. 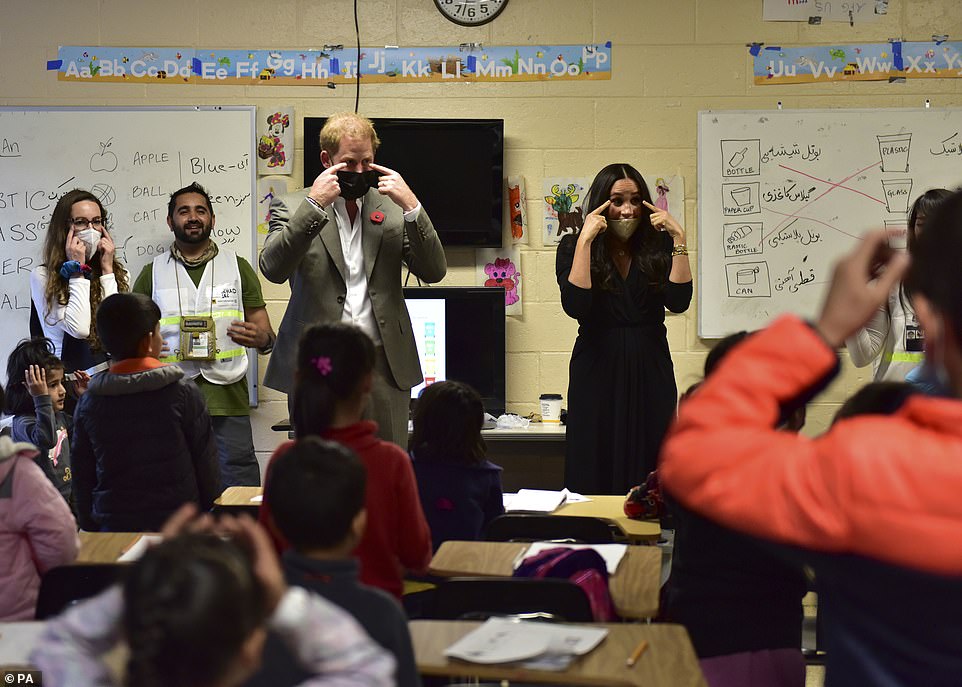 Harry and Meghan visit a classroom full of children learning English during a visit to Task Force Liberty at a US military base in New Jersey (Pictured: Couple sing Heads, Shoulders, Knees and Toes with children) 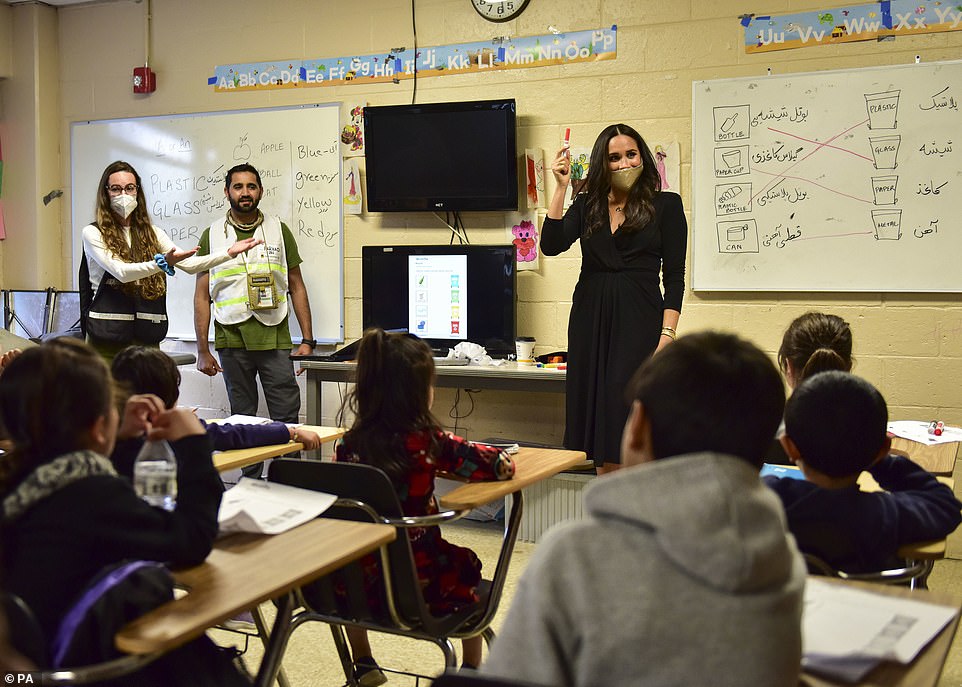 Meghan was pictured holding up a red pen, as the children shouted out the English words for colours they were learning that day 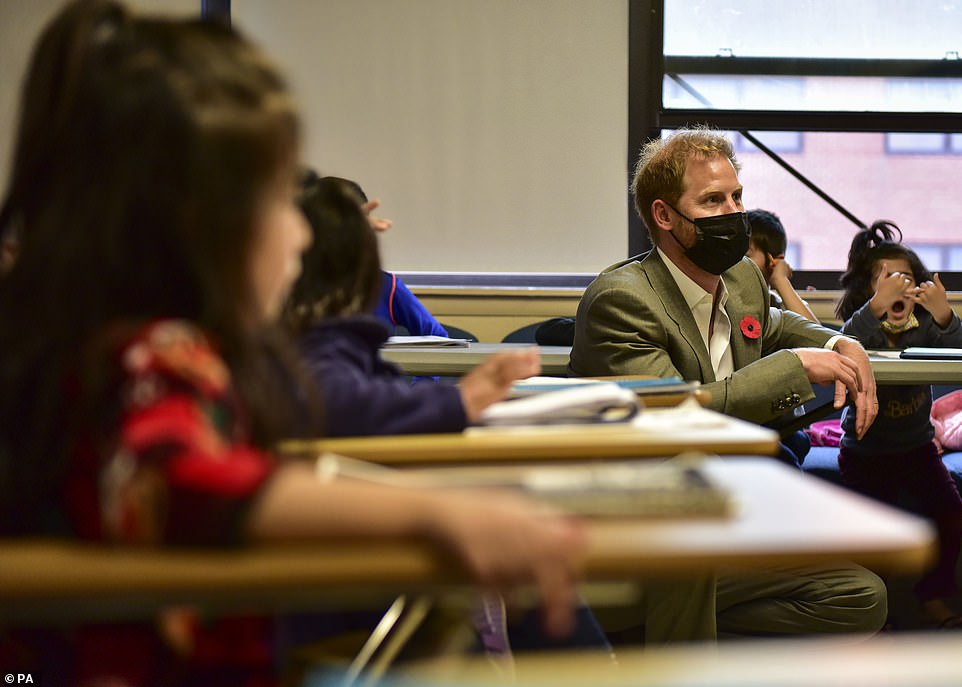 More than 10,000 Afghans evacuated when their country fell to the Taliban are being accommodated temporarily at a compound in the base as part of Task Force Liberty (Pictured: Harry with refugee children at the base)

They were told the song is one of the children’s favourites, and the couple said it is also a favourite of two-year-old Archie.

Harry and Meghan asked teachers about words in Dari, a language spoken in Afghanistan, and thanked everyone they spoke to by using the Dari term ‘tashakur’.

They thanked the teachers in particular for their efforts, and reminded them to take care of their own mental health as well.

The couple also spoke with women who had recently arrived.

The Afghan refugees are referred to as ‘guests’ on the base, where they are housed in a compound called Liberty Village.

Task Force Liberty was launched in August, when the Taliban regained control of Afghanistan as US troops completed their withdrawal from the country, to support Afghan evacuees arriving in the US. 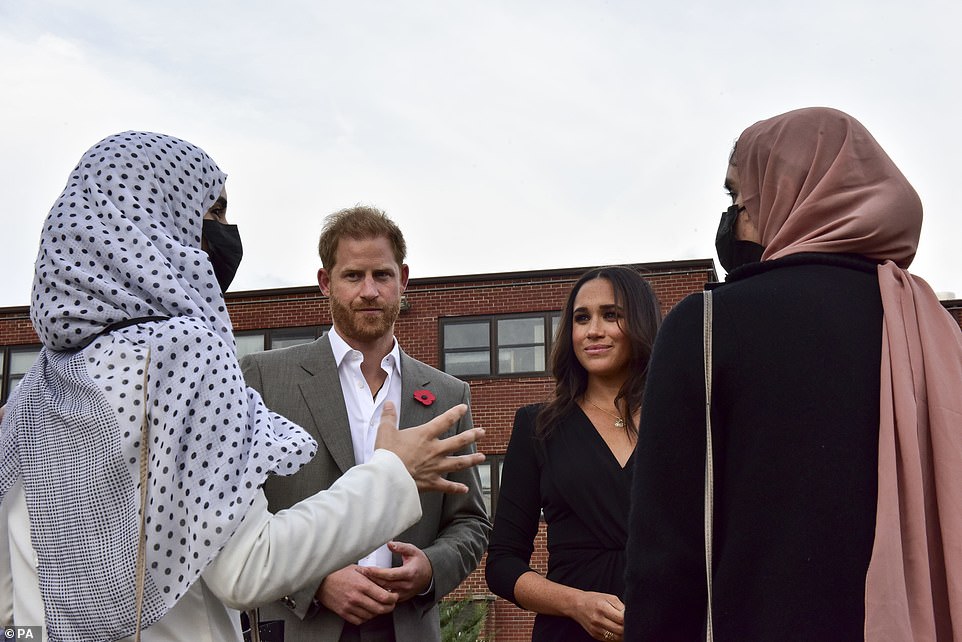 The refugees are being provided with transportation, medical services and temporary housing until they transition to their new home.

During their visit to Joint Base McGuire’s-Dix-Lakehurst, which is the US Department of Defence’s only tri-service base, the duke and duchess joined members of the Armed Forces to mark Remembrance Day in the UK and Veterans Day in the US.

More than 46,000 personnel and their families live on the base.

The duke and duchess also hosted a lunch with service members from all six branches of the military.