When Javid, a self-described long-time fan of Australia, answered his mobile he was more than happy to help, and the two nations were soon on their way to a massive vaccine deal.

“I’m delighted we have agreed a vaccine swap with our Australian friends to boost both countries’ vaccination programmes and protect as many people as possible – the first doses will arrive on Sunday evening,” Javid later told The Sydney Morning Herald and The Age.

“The virus does not respect international borders and it is vital the world works together to ensure everyone has access to vaccines so we can live safely and get back to doing all the things we love,” he said. 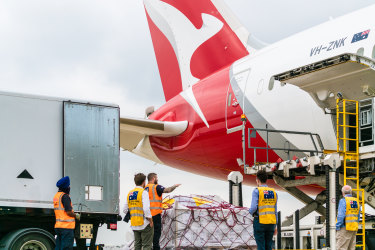 Some 450,000 Pfizer doses from the UK being loaded onto a Qantas cargo flight at Heathrow Airport bound for Sydney.Credit:Australian High Commission

Three days after Brandis’s urgent call, Scott Morrison and Boris Johnson were on the phone to discuss the deteriorating situation unfolding in Afghanistan.

They touched on other global issues including Australia’s lack of net-zero climate change targets.

But the pair discussed something else that was not included in the official readout supplied by Number 10 at the time – the pandemic and Australia’s desperate need to acquire more mRNA vaccines, of which the UK had a surplus close to the expiry date.

Morrison asked Johnson if he would be happy to proceed with negotiating a vaccine swap, and the British Prime Minister agreed.

At 11.08 the next morning Brandis was dialling Javid once more. The calls continued all weekend.

On Thursday night, they met in person at Australia House at the end of the Strand for the first time since beginning the negotiations to sign the memorandum of understanding.

The job was done. Morrison announced to the Australian public on Friday morning that the 4 million doses that made up the deal would “supercharge” the country’s vaccine rollout, which had been plagued by early mishaps.

But for the team in London, the job was far from over. The next task was how to get the Pfizer doses as quickly as possible into Australian arms. Shipping was not an option.

The doses need to be transported at ultra-low temperatures. Because of the caps on passengers that the national cabinet has imposed since July last year, there are just a handful of commercial flights into Australia, meaning trying to send the doses via existing air freight would have meant a seven-day delay.

It was decided to charter a Qantas freight-only flight.

The first shipment departed on Saturday morning local time from Heathrow, packed with so many doses – nearly half a million – that Qantas had to obtain special permission from the Civil Aviation Safety Authority to land because the flight was heavier than normal. 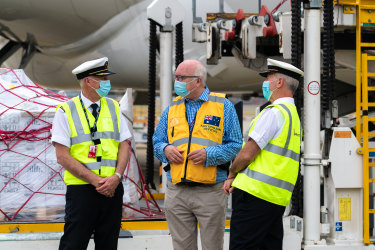 The first 450,000 doses of the promised 4 million will arrive in Australia on Sunday.

The freighter, flight QF110, will refuel in Darwin before its final stop in Sydney. QF10, a repatriation flight that also left on Saturday with doses will refuel in Perth. The Australians onboard will be flown from Perth to Hobart and the doses flown on to Sydney.

“I am very proud to be playing my small part to take that story to its next chapter, and help fly Australia to the next phase of our response with this first vaccine-delivery flight from London,” he said. 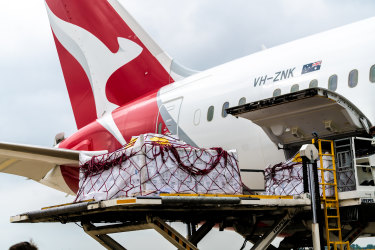 Four million doses of hope are on the way from the UK.Credit:Australian High Commission

“If I had a simple message for my family back home – it’s to book your jab as soon as possible and take advantage of the doses already at home and the 4 million on their way from London.”

Only three countries have sent vaccines Australia’s way: Singapore, Poland and Britain, which is contributing the highest number by far.

Brandis said that once again Australians had been reminded that they had no truer friend.

“This is a win-win deal for the UK and Australia,” he said.

“Four million doses of hope are flowing to Australia today, and we are reminded that Australia has no truer friend than Britain.”