PRINCE Andrew has been pictured grinning as he went on a horse ride while his pal Ghislaine Maxwell goes on trial accused of being a sex trafficker.

The Duke of York beamed a big smile as he trotted along atop his horse and was seen driving his Range Rover around Windsor Great Park. 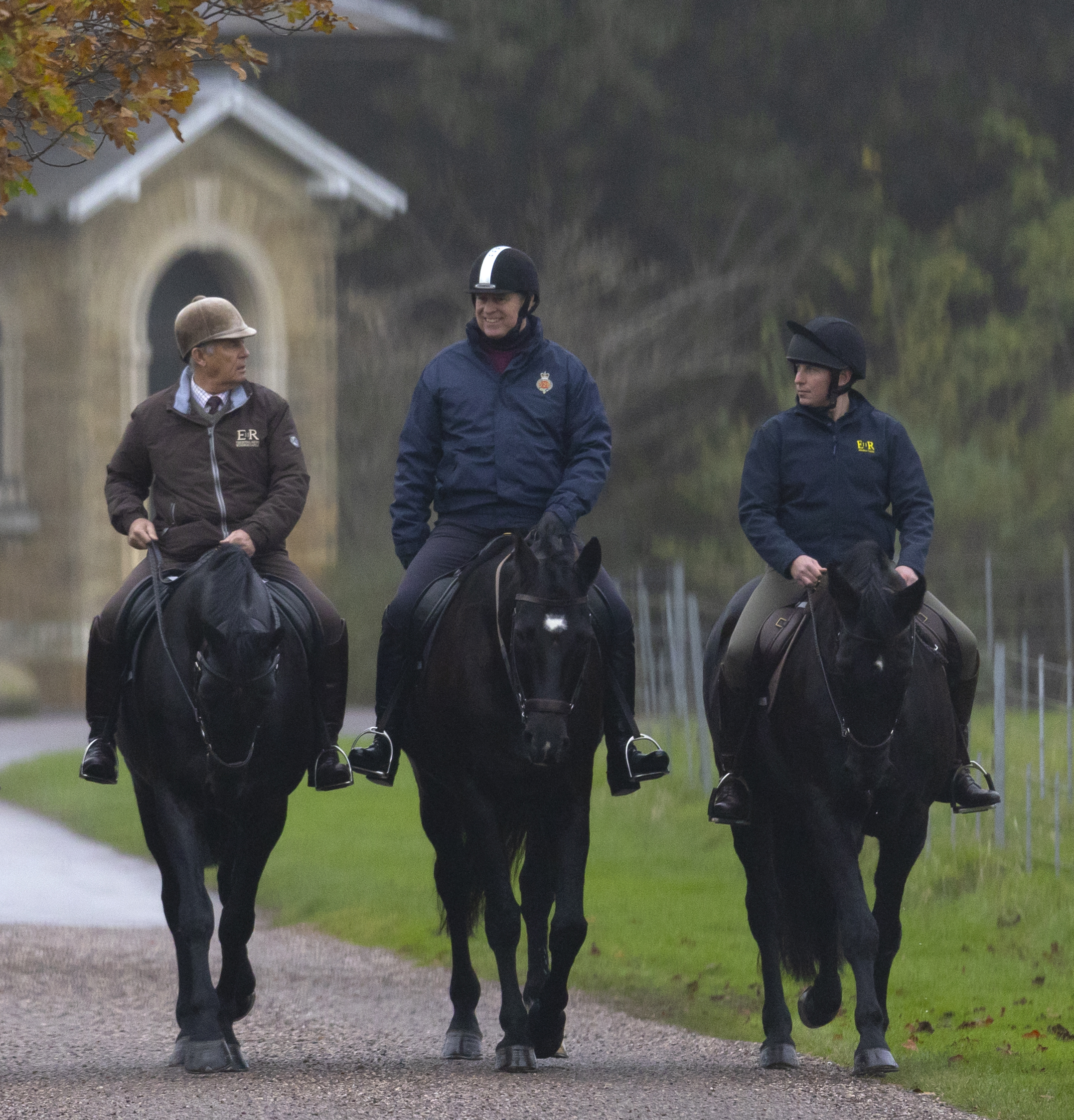 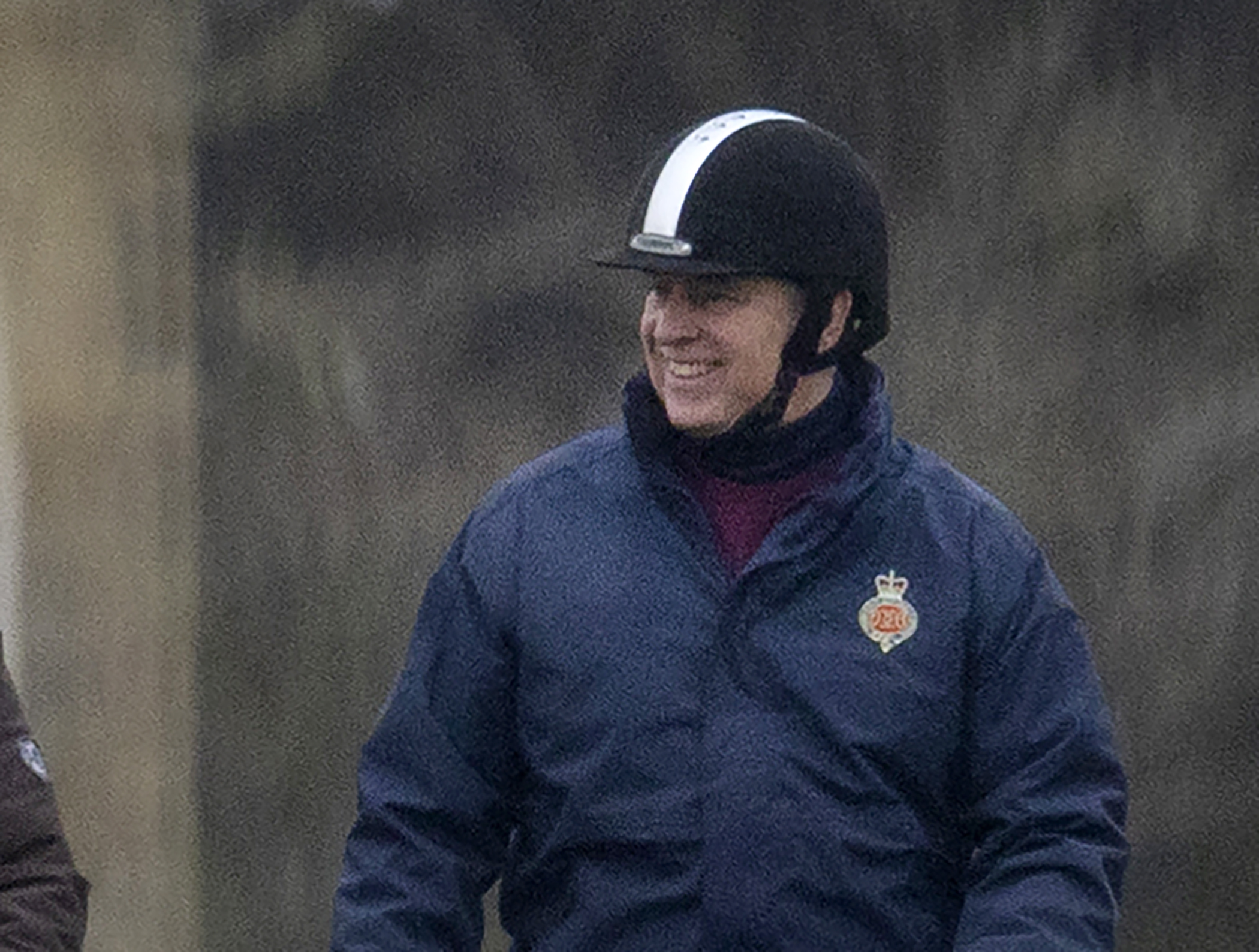 Andrew appeared to not have a care in the world as his old friend Ghislaine was hauled before the court some 3,400 miles away in New York.

It has previously been reported the Duke has been "dreading" the idea that his name could be mentioned during the high profile case.

Maxwell faces six charges relating to four victims as she is accused of acting as a "madam" for multimillionaire paedo Jeffrey Epstein.

Ghislaine and Andrew are believed to have known each other for the better part of two decades before she is alleged to have introduced him to her then boyfriend.

And the Duke is believed to have subsequently struck up a friendship with Epstein.

It was a relationship that allegedly saw him make multiple visits to Epstein's homes and his private island, Little Saint James.

And during this pally period, Epstein and Ghislaine are said to have introduced the royal to the then 17-year-old Virginia Roberts.

She claims she was trafficked to have sex with Andrew.

Andrew vehemently denies all allegations against him – but continues to find himself in the spotlight as Ghislaine becomes the first person to face the courts over Epstein's sex trafficking web.

However, Virginia is not part of the case currently being brought against Ghislaine.

During his infamous car crash interview on BBC Newsnight with Emily Maitlis, the Prince dropped a few key hints about his friendship with Ghislaine.

He explained he met Epstein through his "girlfriend" – Maxwell – who he had known "since she was at university in the UK".

The Duke laid out how his relationship with the paedophile was always through the prism of Ghislaine, the daughter of newspaper mogul Robert Maxwell.

Events which Epstein and Maxwell attended – such as at Windsor Castle – were normally arranged through her, with Epstein as the plus one.

If there are questions that Ghislaine has to answer, that's her problem I'm afraid, I'm not in a position to be able to comment one way or the other

And he did not comment on Maxwell's own alleged involvement in Epstein's trafficking scheme.

"If there are questions that Ghislaine has to answer, that's her problem I'm afraid, I'm not in a position to be able to comment one way or the other," he said.

Andrew did however admit to speaking her as late as 2019, but said they did not discuss Epstein.

"There wasn't anything to discuss about him because he wasn't in the news, you know, it was just… we had moved on," he said.

They spoke just before Epstein was arrested and subsequently committed suicide, which led to Maxwell going into hiding before her own arrest by the FBI in 2020.

Andrew also said that because of his relationship with Ghislaine it would have been "inevitable" that he met with Epstein at some point. 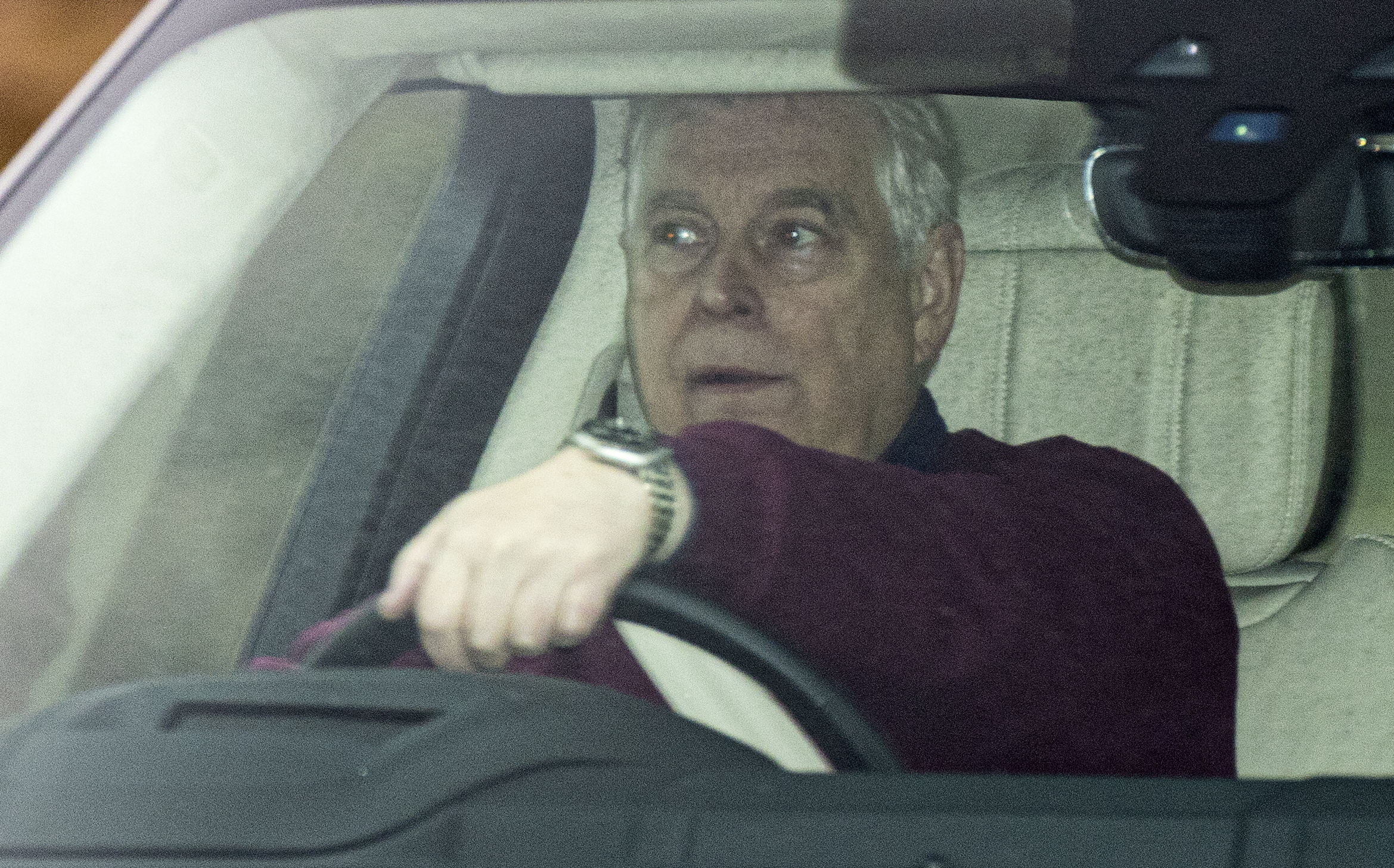 Maxwell and Andrew were pictured together at numerous events in the noughties,sometimes also with Epstein.

And the most infamous picture detailing a link between Andrew and Ghislaine was taken at her London townhouse in 2002.

It shows the Duke with his arm around Virginia Roberts while the socialite smiles in the background – the pic was allegedly taken by Epstein.

Andrew has since suggested the photo is fake.

"I don't remember going upstairs in the house because that photograph was taken upstairs and I am not entirely convinced that… I mean that is… that is what I would describe as me in that… in that picture but I can't… we can't be certain as to whether or not that's my hand on her whatever it is, left… left side."

It was allegedly taken that night that Andrew had sex with the 17-year-old Virginia – an allegation he strongly denies.

Andrew claims that night he was actually at a Pizza Express in Woking.

Virginia is one of Epstein and Maxwell's most high profile accusers, but is notably not one of the four over whom Ghislaine faces charges.

She does however have a seperate civil lawsuit currently being brought against Andrew. 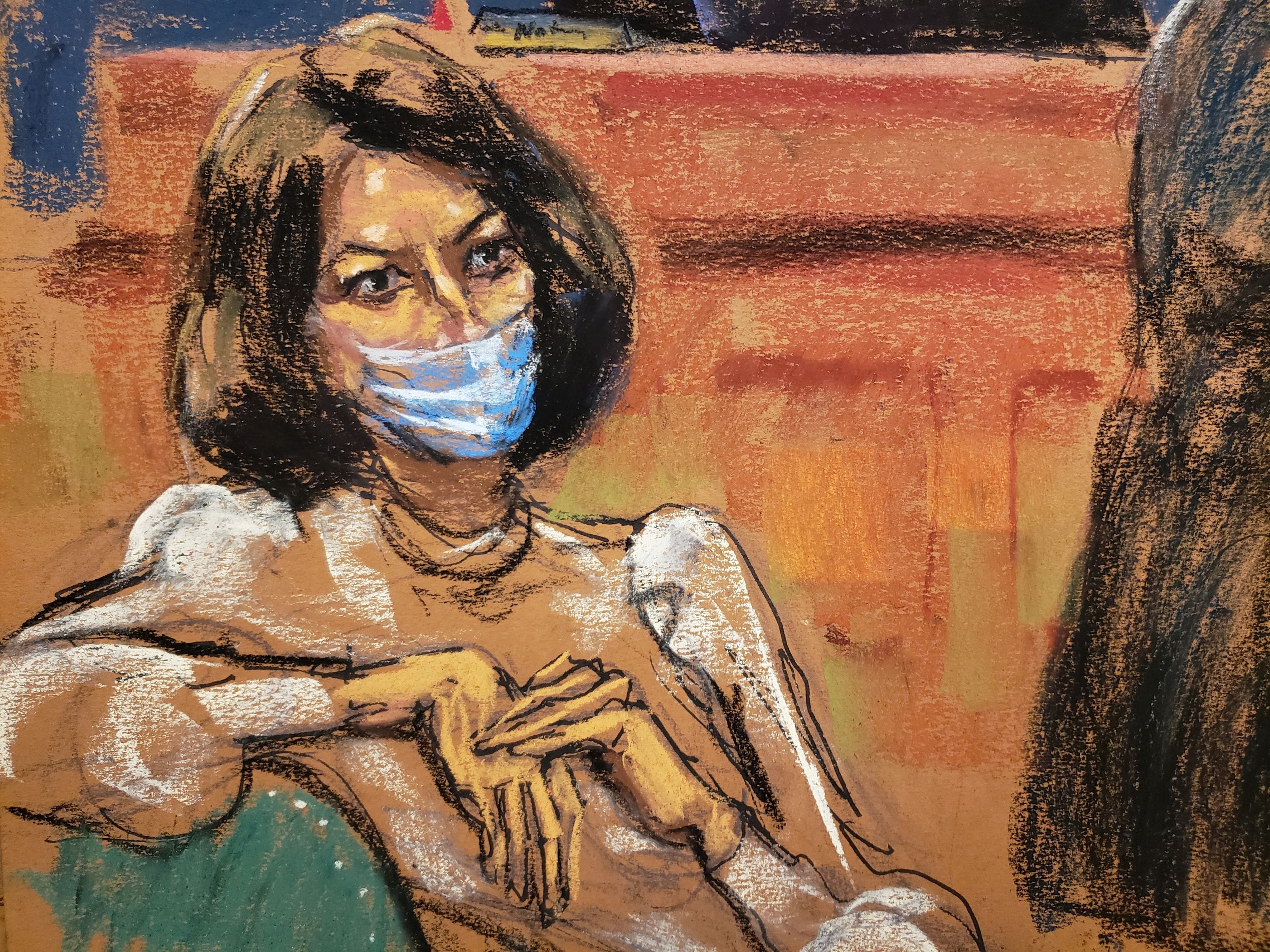 Yesterday, prosecutors argued she "served up" young girls to Epstein as part of a pyramid scheme of abuse as she appeared in court in New York.

Epstein and Maxwell rubbed shoulders with the world's rich and famous – allegedly hiding in plain sight amid a web of sordid sex abuse.

Her lawyers deny all charges against her, argue she is being made a proxy for Epstein, and have painted the alleged victims as in it for the cash.

It was revealed in court yesterday that one of the three anonymous victims is a British actress, while another is a star on a US soap.

The third unidentified victim was also attacked by Maxwell's defence team as having a "dangerous lifestyle".

And the only publicly named victim of the three is Annie Farmer, the sister of another Epstein victim Maria Farmer.

The exact charges against Maxwell are:

Maxwell's lawyer Bobbi Sternheim claimed "ever since Eve, women have been blamed for the evil deeds of men".

She said: "Ghislaine Maxwell is not Jeffrey Epstein or any of the other men, moguls and media giants who abuse women."

The defence will attempt to argue that she is a "scapegoat" and are expected to hinge much of their case on going after the victims.

"The government is trying to stitch together four different story," Sternheim said.

"But the only common denominator is they got big payouts. These are paper cut-outs. The charges are not supported."

However, the prosecution paint a very different picture of Ghislaine as instrumental in Epstein's web of money, sex and lies.

Lawyers called the 59-year-old Brit heiress a "dangerous predator" and said she and Epstein were “partners in crime”. 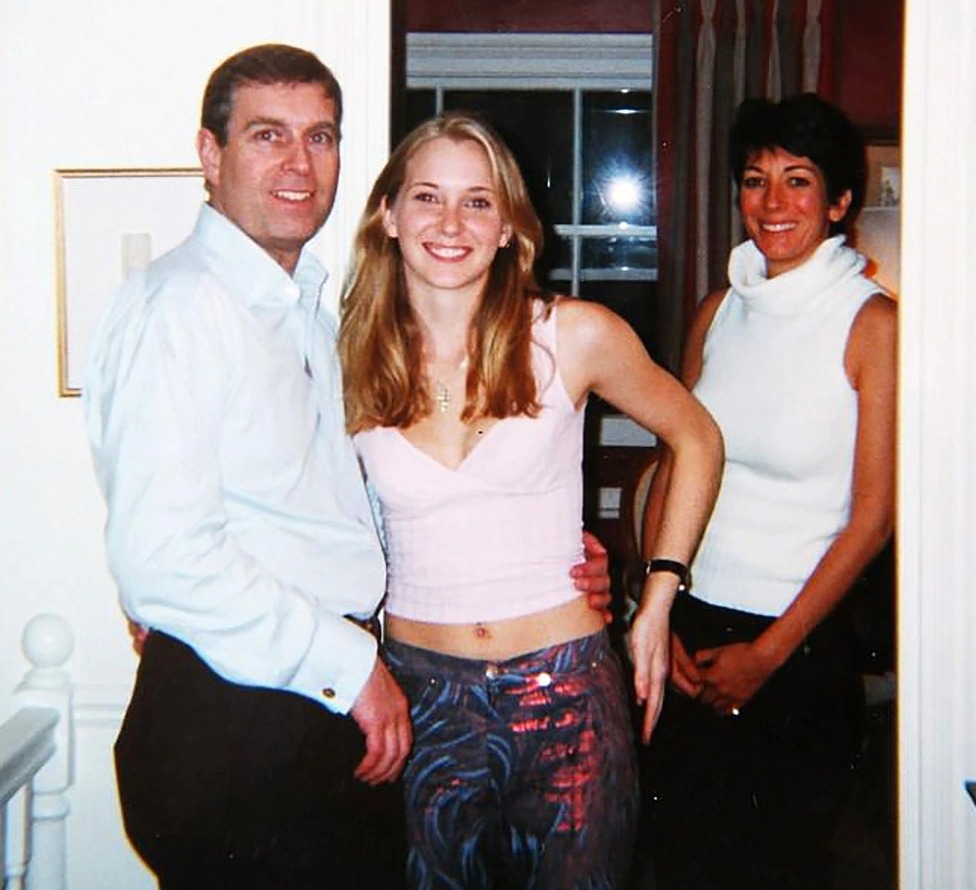 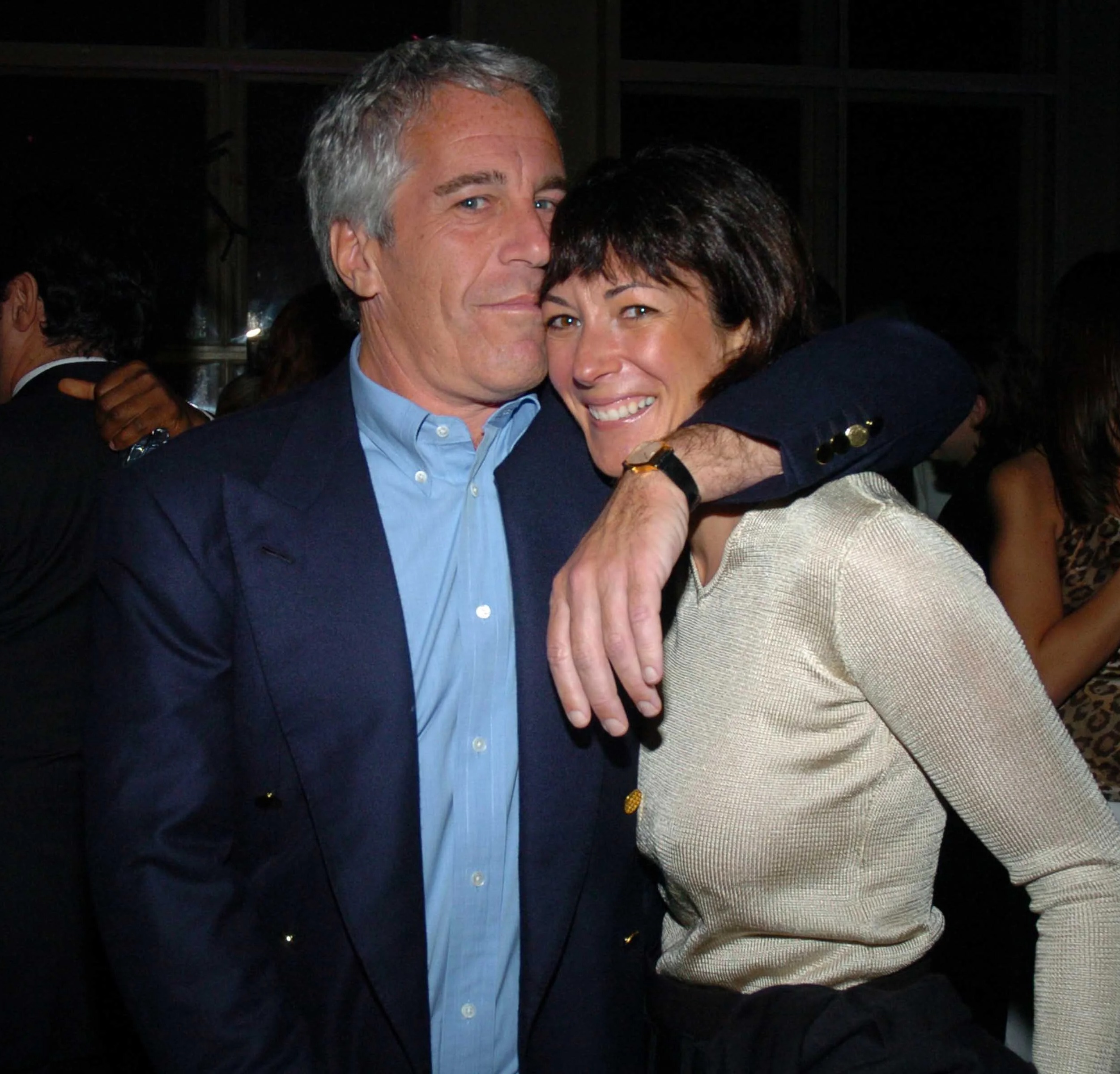 Maxwell is alleged to have snared girls as young as 14 into a "nightmare" after promising them "the world".

She is accused of walking girls into Epstein's liar where she watched as he molested them – and sometimes even joined in.

Epstein killed himself while awaiting trial for sex trafficking in August 2019.

She also faces two other charges of perjury over allegations she lied in a deposition in a separate civil suit, but these will be tried separately.

Maxwell was arrested suddenly in July 2020 by the FBI after being accused of going into hiding over the allegations.

She was detained as she was deemed a flight risk and was repeatedly denied bail.

Daughter of disgraced newspaper mogul Robert Maxwell, Ghislaine was born into a life of wealth and raised at the 53-room mansion Headington Hill Hall.

Working in various roles at her dad's companies – including as a director of Oxford United – she became a prominent socialite in London.

Her father died in 1991 after apparently falling from his yacht – named the Lady Ghislaine.

It is from this point, it is claimed the Maxwell grew closer with Epstein and the abuse is alleged to have begun in the 90s.

Epstein was first convicted of sex offences in 2008 on a single charge of soliciting prostitution from girls as young as 14.

Some 11 years later, the cops finally charged him with a wider conspiracy for trafficking minors in Florida and New York.