The biggest mystery in Australian maritime history is on the cusp of being solved through a DNA breakthrough with an announcement expected this week.

A positive match for DNA has been made for “The Unknown Sailor”, the only sailor recovered from HMAS Sydney sunk off the Western Australia coast with the loss of 645 lives during the Second World War.

The Australian War Memorial describes it as “the most grievous loss suffered by the Royal Australian Navy.”

The German cruiser Kormoran enticed the Sydney into close range where she was able to overwhelm her with gunfire and torpedoes. The Sydney fought back to ensure the raider’s destruction before limping slowly away to her own fate. Next Friday will be the 80th anniversary of the sinking on November 19, 1941. 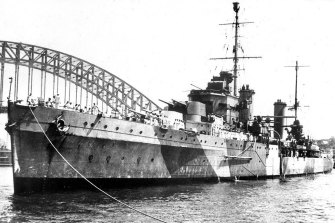 HMAS Sydney lost in an engagement with the Kormoran in 1941.Credit:

The only body ever found from Sydney was washed ashore almost three months later on February 6, 1942, in a carley float off Christmas Island and has always been referred to as “the unknown sailor”.

He was buried with military honours on Christmas Island but the remains were exhumed in 2006 and bone and dental samples taken before reinterment at the war cemetery in Geraldton north of Perth. Since then, exhaustive checks have been made over 15 years with relatives of crew members asked to provide DNA samples. 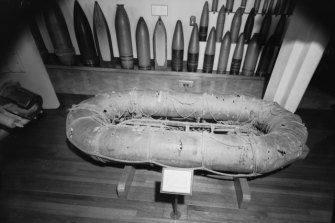 A carley float, associated with HMAS Sydney recovered from the sea by HMAS Heros 200 miles from Carnarvon on 27 November 1941. It is not the one that held the body of the unknown sailor.Credit:AWM

Ahead of the anniversary a source who cannot be named, told the Herald: “A DNA result has shown a positive match. There is DNA which matches the unknown sailor.”

Asked to comment on progress in identifying the unknown sailor, a spokeswoman for the Department of Defence said: “The announcement regarding your inquiry is imminent.” Defence did not provide any further details other than to say the announcement was due in about a week which would tie in with the anniversary on Friday. 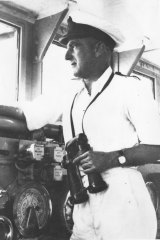 Captain Joseph Burnett, RAN who was in command of HMAS Sydney when she was lost during an engagment with the German raider Kormoran off the west Australian coast on November 19, 1941Credit:AWM

Previously with only the mitochondrial DNA (mitochondrial DNA tests are used to trace people’s mother-line ancestry through their mitochondria – known as the powerhouse of a cell) researchers would have had to find a sister or female relative of the sailor on HMAS Sydney. Also, with the search not starting until 2006, many who could have provided DNA were already dead.

Now Y chromosomes known as Y-DNA testing enable a trace to be made through the paternal line. If the sailor had a brother who had a son, then the son could now provide DNA for testing which opened the opportunity to search a new and broader range of people.

The Herald and The Age have not seen the new test results and therefore has not been able to seek to verify them with independent researchers.

Some details of the unknown sailor were learned at the time the body was discovered. He was a white man wearing blue overalls bleached white by the sun. Blue overalls indicate a lower rank sailor and not an officer. Australian made press-studs were recovered from the remains with blue material between the studs.

It was previously believed that his hair was blond, light brown or red, rather than black or dark brown. He is thought to have had blue eyes and been between five foot two inches (1.67 metres) and six foot two inches (1.87 metres) tall. He was likely aged between 20 and 30 years old.

A high number of those on board were aged in their late teens, according to a spreadsheet of all 645 names. Those details, together with dental records, once cross-checked with information available in National Archives when the sailors enlisted, means more than 500 names had already been delegated as unlikely candidates. 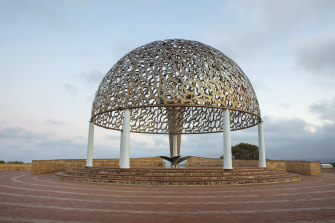 HMAS Sydney Memorial in Geraldton, Western Australia. The dome has 645 seagulls, one for each sailor who died.Credit:Photo: Karl Monaghan

In World War II, some sailors had dog tags, if they had them at all, which were made of fibreboard that would turn to pulp or be destroyed in fire. Metal tags were issued later in the war.

Brad Argent, senior director of International Programming at Ancestry, speaking from London, said: “Growth in the consumer genomics industry – and the normalisation of DNA testing – has created a wonderful resource for solving all kinds of unanswered questions.

“It’s exciting to think that we could be close to finding a name for the unknown sailor – and all the more poignant it being so close to the anniversary of such a tragedy. This is the perfect marriage of science and history.

“Perhaps if we can put a name to the body that washed up on Christmas Island almost 80 years ago it will act as an anchor for the souls of the other 644 men whose bodies were lost to the sea and they, and their families, can find peace.”

Robert Henry Hill an engine room artificer enlisted in 1940, just months after he had fallen in love and become engaged. He was the great uncle of Alison Mudie who learnt of his experiences as a crew member on the HMAS Sydney, including one where he and his crew marched through the streets of Sydney as heroes after a successful deployment in the Mediterranean. 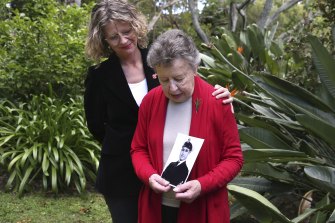 Rosemary White (front) with Alison Mudie in Turramurra, reflects on her uncle Robert Hill who died in the sinking of HMAS Sydney. Credit:James Alcock

Robert aged 26, wrote a last letter home to his family which arrived only a few weeks before the ship was lost. The letter was to congratulate his sister, who had given birth to a daughter, Rosemary White, his niece and Alison’s mother and who just turned 80 on October 27.

Ms Mudie from Lilyfield said her mother had given a DNA sample five years ago but had heard nothing. “It wasn’t just Robert who died in the war, his brother Ron in the RAAF died when his aircraft, a B-25 Mitchell crashed off the coast of Nightcliff in 1943,” she said.

Of the latest development, she said: “I think it would be an incredible closure to know the identity of the unknown sailor but also just for him to represent the other boys who were lost, a lot of them were just boys. He may have died soon after he got into the raft but the fact that he was found is really special. Others can look through photographs and see if our loved ones knew him.” 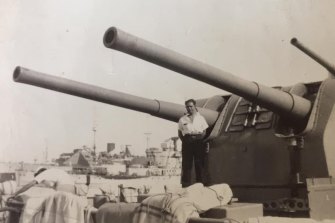 Robert Henry Hill lost on HMAS Sydney in front of 6-inch guns, he was an engine room artificer, 4th class.

Lavington “Jack” Agar, aged 40 was serving on the ship as a chief mechanician. In a letter to his mother dated “September 30, 1941 At Sea” (three weeks before the ship went down) he wrote: “I hope you receive this letter alright and hoping to hear from you again very shortly. I will say goodnight for the present, best love to you and dad, from your loving son, Lav.” There were 14 kisses.

Jack’s granddaughter Kaye Farnsworth from Seaford who has used Ancestry to research the family history, said she was emotional thinking of the hard life her grandmother had. Told of the DNA development, she said: “I have always wondered who it was, I suppose you would feel a little bit better as a family member to know that somebody at least got off the ship.

“It would be nice if somebody actually had a grave as opposed to everybody being on the floor of the ocean.” 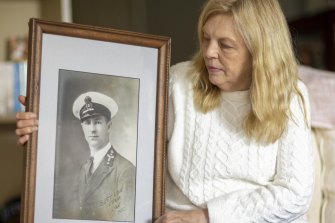 Kaye’s aunt Margaret Noble, aged 86 (Jack’s daughter) said she was five years old when the Sydney went down. “My mum showed my sister and me one day all dad’s letters tied up with a blue ribbon,” she said.

“She said this is for you girls when you get a bit older. When my mother died my stepfather, who I hated with a passion, burnt all of it. It makes me emotional just thinking about it.

“Mum always said he had a premonition because on that last trip he took things to sea that he never took to sea and he left at home things he always took to sea.”

Based on the procedure for World War One soldiers identified in recent years, the identity will be put to a Navy casualty board to assess. If they are agreed, changing of the name on the headstone would pass to the Office of Australian War Graves.

Why only one body?

After the wreck of both ships was found in March 2008 a Commission of Inquiry was launched by Air Chief Marshal Angus Houston and deputy prime minister Julia Gillard. The Coles Inquiry noted: “There is a sense of frustration within the community that the navy has not revealed the full circumstances surrounding the deaths of the crew of HMAS Sydney.”

It found damage to both vessels confirmed the closeness of the battle supported by German eyewitness accounts that the Sydney was struck by a torpedo. Sydney’s bridge and control tower suffered damage seen on the wreckage believed to have resulted in the deaths of many officers. There was fire damage to the entire bridge. Shell damage and fire made it unlikely that the Sydney’s lifeboats would be usable by survivors.

The inquiry found that by the time battle ceased there were likely many casualties on board, probably in the order of 70 per cent of her complement. It is probable there were still some alive on Sydney as she slowly sailed away from Kormoran. They had available to them no lifesaving measures that would allow them to leave the ship. The unknown sailor in the Carley float recovered off Christmas Island in February 1942 had suffered a serious shrapnel wound to the head, which caused his death immediately or shortly thereafter.

The sole empirical fact available to Captain Joseph Burnett when making his initial decision was that the ship was not expected to be there. The terrible consequence of his erroneous decision was that Sydney did not go to action stations and approached to a position of great danger, where all her tactical advantages were negated and the advantage of surprise was given to Kormoran. It resulted in the loss of Sydney.

It wasn’t until November 23 to 25, when Kormoran survivors were picked up in lifeboats by various ships and on land, that the Royal Australian Navy was alerted to Sydney’s disappearance and the search commenced.