Washington: The explosion of Omicron cases along the US East Coast corridor from the Mid-Atlantic to New England is showing signs of slowing down, according to health officials and epidemiologists, offering reason for cautious optimism that the turning point could be near and that the variant’s US trajectory is similar to that of other countries.

New York Governor Kathy Hochul, a Democrat, said the rates of tests returning positive and case increases seemed to be slowing – particularly in New York City, which emerged as an early epicentre of the highly contagious coronavirus variant. 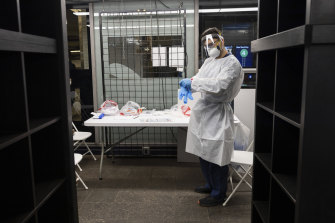 A medical worker waits at a COVID-19 testing site in the Times Square subway station in New York.Credit:AP

Coronavirus levels in Boston-area wastewater are falling, a promising sign because alarmingly high levels spotted earlier presaged record infections. The Children’s Hospital of Philadelphia has seen the rate of teachers testing positive during asymptomatic weekly screening plunge from 25 per cent in the week between Christmas and New Year’s to 2 per cent in recent days.

Forecasters are expecting similar trends in the Mid-Atlantic, where infections have been slowing in DC and Maryland, but the ongoing strain on hospitals prompted officials to declare emergencies.

“Omicron is more like a flash flood than a wave. It goes to enormously high levels very quickly and then, based on other parts of the world, may come down very quickly,” said Tom Frieden, a former Centres for Disease Control and Prevention director and New York City health commissioner. “We know that the more people who are up to date with their vaccines, the fewer deaths there will be, the fewer hospitalisations there will be and the less economic disruption there will be.” 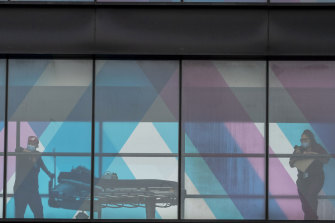 Healthcare workers and a patient at an overpass at Mount Sinai Hospital in New York.Credit:AP

Experts caution these are still early data points for predicting the trajectory of a virus that has repeatedly shown to be unpredictable. It’s also too soon to declare a rapid decline in infections following the steep spikes, as was observed in South Africa and London. Cases remain alarmingly high, like a reckless driver slowing from 110kph to 90kph.

But there is good news.

David Rubin, who tracks national coronavirus trends for PolicyLab at the Children’s Hospital of Philadelphia, said federal data showed a sharp decline in emergency room visits for coronavirus in the North-east and the rest of the country was on track to follow a similar path.

“You got a picture of an East Coast that’s rapidly improving, a South-east that’s not far behind, a Midwest that’s maybe a week behind the East Coast while the West Coast has not yet peaked,” Rubin said. “Our assessment is likely we have peaked as a country.”

The US recorded more than one million cases a day in early January.

New York City is still averaging about 40,000 infections a day. While Omicron appears to cause milder illness with a lower hospitalisation rate, the high volume of cases hitting all at once has led to long emergency room waits and staff shortages at some hospitals.

Northwell Health, New York’s largest hospital system, has seen new daily admissions remain relatively flat since the new year while about half of patients with the coronavirus were admitted for other causes and tested positive on routine inpatient testing. John D’Angelo, who oversees Northwell’s operations and emergency medicine, said other downstate hospitals have reported similar trends in calls organised by the Greater New York Hospital Association.

That’s different from earlier waves – when hospitalisations were usually a lagging indicator – a contrast that experts believe is linked to more mild illness with Omicron. But some smaller hospitals have been reporting bigger strains, prompting Northwell to lend staff and accept patients.

“The real game of this wave is plugging all the gaps when you don’t know where there’s going to be pockets of people who are sick,” D’Angelo said. “But a lot of independent hospitals and others don’t have that luxury.”

“While we can start to breathe a sign of relief that we appear to be coming off the worst, I think this is still a time for enormous caution,” Lander said in an interview. “The experts I talk to believe that February could be a turning point where hospitals start to feel less pressure, and I think that’s the time we can start to look at pulling back some.”

Omicron will still loom large over business and entertainment in New York City through the rest of winter. Organisers postponed the annual theatre convention BroadwayCon to July, worried the scheduled mid-February date would be unsafe.

But other events are going ahead, bolstered by hopes that Omicron will subside in the city. Lunar New Year festivities – including a parade – are on for next month in Chinatown, said Wellington Chen, executive director of the Chinatown Partnership Local Development Corporation.

“Hopefully Kathy Hochul is right that there is a downward turn now, that we may have peaked,” Chen said.

Restaurants are eager for companies to bring their workers back to offices, said Andrew Rigie, executive director of the NYC Hospitality Alliance. Those plans have proved ever-shifting. Delta derailed September return dates. Omicron pushed back plans for January.

“Hopefully people who cancelled their reservations and stopped going out to eat and drink during the height of the Omicron surge will be excited to get back out,” Rigie said.

Jeffrey Shaman, an epidemiologist at Columbia University, said people who laid low during the worst of the Omicron spikes are susceptible to new infections as they return to their usual activities, potentially resulting in a protracted decline instead of a rapid one.

“If you think about it, if we are just at the peak and if it were to come down as fast as it went up, that means we are halfway through people getting infected,” said Shaman, who previously projected New York City’s Omicron wave peaking in early January and in the rest of the country later in the month. “There’s still a lot of infections that are going to happen and that means a lot of people going to the hospital, a lot of work disruption, a lot of school disruptions still.”

There are limitations to case numbers as a window into the state of Omicron surges, including a portion of unreported positive rapid test results and widespread asymptomatic screening that catches cases that would have gone unnoticed in earlier surges.

Some areas use wastewater tracking to detect genetic material associated with the coronavirus as an alternate measure of the virus’s prevalence in a community. The Massachusetts Water Resources Authority tracking system shows a rapid decline in RNA copies samples associated with the coronavirus after peaking several weeks ago even as the official case count continues to rise.

Shira Doron, a Tufts Medical Centre epidemiologist, said this provides additional evidence US states experiencing sharp upticks will also see sharp declines. It could show a way of navigating a pandemic that has flare-ups without requiring long-term closures or mitigation measures, barring the emergence of new variants that act differently.

“This wave like the other will come to an end and there will be better, safer times in the pretty near future,” Doron said. “We don’t know if those times will stick. We don’t know what will happen after that. I truly believe there will be ebbs and flows and highs and lows for this pandemic for a long time to come.”