Gaza City: A Hamas-run Islamic court in the Gaza Strip has ruled that women require the permission of a male guardian to travel, further restricting movement in and out of the territory that has been blockaded by Israel and Egypt since the militant group seized power.

The rollback in women’s rights could spark a backlash in Gaza at a time when the Palestinians plan to hold elections later this year. It could also solidify Hamas’ support among its conservative base at a time when it faces criticism over living conditions in the territory it has ruled since 2007. 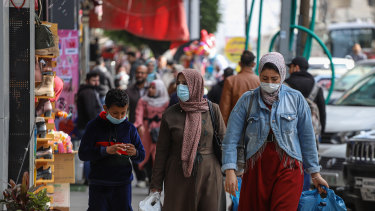 A court in Gaza has ruled women need authorisation from a guardian to travel.Credit:Bloomberg

The decision by the Sharia Judicial Council, issued on Sunday, says an unmarried woman may not travel without the permission of her “guardian”, which would usually refer to her father or another older male relative. Permission would need to be registered at the court, but the man would not be required to accompany the woman on the trip.

The language of the ruling strongly implied that a married woman would not be able to travel without her husband’s approval.

The edict also said that a man could be prevented from travelling by his father or grandfather if it would cause “grave harm.” But the man would not need to seek prior permission, and the relative would have to file a lawsuit to prevent him from travelling.

The ruling resembles the so-called guardianship laws that long existed in ultra-conservative Saudi Arabia, where women were treated as minors requiring the permission of a husband, father or even a son to apply for a passport and travel abroad. The kingdom loosened those restrictions in 2019.

Hassan al-Jojo, head of the Supreme Judicial Council, said the ruling was “balanced” and consistent with Islamic and civil laws. He dismissed what he called “artificial and unjustified noise” on social media about the edict.

He justified the measure by citing past instances in which girls had travelled without the knowledge of their parents and men had left their wives and children without a breadwinner.

Israel and Egypt have largely sealed Gaza’s borders since Hamas seized power from rival Palestinian forces in 2007. Israel says the restrictions are needed to isolate the militant group, which has fought three wars with Israel, and prevent it from acquiring arms.

The territory is home to some 2 million Palestinians. All Gazans must go through a lengthy permit process to travel abroad and largely rely on the Rafah crossing with Egypt, which only opens sporadically. The restrictions make it difficult for people to seek medical care or higher education outside the narrow coastal strip.

The ruling sparked criticism on social media, where many accused Hamas of rolling back women’s rights even as Saudi Arabia has eased its restrictions, including by allowing women to drive. The Palestinian People’s Party, a small left-wing group, called on Hamas to reverse the decision.

She noted that the same legal body allows a woman to marry at age 16 and get travel documents on her own.

Hamas has not imposed the kind of harsh interpretation of Islamic law championed by other armed groups, such as the Islamic State group and the Taliban in Afghanistan. But it has taken some limited steps to enforce the territory’s conservative mores, including the imposition of an Islamic dress code on female lawyers and high school students.