The organisers of a festive parade were forced to cancel the event after a group of drunk thugs jumped onto Santa’s sleigh and threatened to punch him during a rampage in front of families.

Residents in Sittingbourne, Kent, had been enjoying the town’s annual sleigh rounds, which sees Santa and his convoy parade through different roads, when the event descended into chaos.

The gang of thugs jumped on the sleigh and threatened to punch Father Christmas before ripping a permit badge pinned to the chest of a female volunteer at around 7pm on Monday.

Danielle Hoynes, who chairs the Sittingbourne Christmas Lights committee, said the gang of ‘very unpleasant drunks’ had been ‘stalking’ the sleigh all evening. 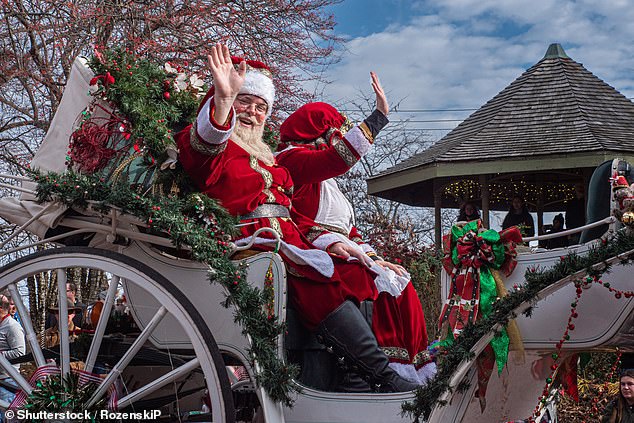 The organisers of a festive parade in Sittinbourne, Kent, were forced to cancel the event after a group of drunk thugs jumped onto Santa’s sleigh and threatened to punch him at around 7pm on Monday. (Stock image)

She said: ‘Halfway round the course one of them jumped on the sleigh and threatened to punch Santa as well as ripping off the permit badge pinned to the chest of one of our female volunteers.

‘Then later on in the round two of the three people were hiding behind a van which was round a corner.

‘They stepped out as we passed and shouted ”hello Santa”.

‘I’m pretty sure they were following the route from our online post as it’s a very quiet road and not an obvious part of the route if you didn’t know it.

‘We had to cancel the rest of the round, disappointing a lot of children, because of the harassment.’

The organiser said the incident was reported to police and has now appealed for those with any video footage to come forward to help with their investigations.

It is believed the gang plotted where to go from the route published on social media.

The sleigh ride began at 6.30pm and was due to travel through six different streets before the gang of thugs attacked.

The event, which is organised by Sittingbourne Christmas Lights and Sleigh Rounds, usually sees Santa and his convoy drive past houses and shops and greet children.

Before the pandemic, Santa used to hand out sweets to children but this has since been stopped due to coronavirus precautions. 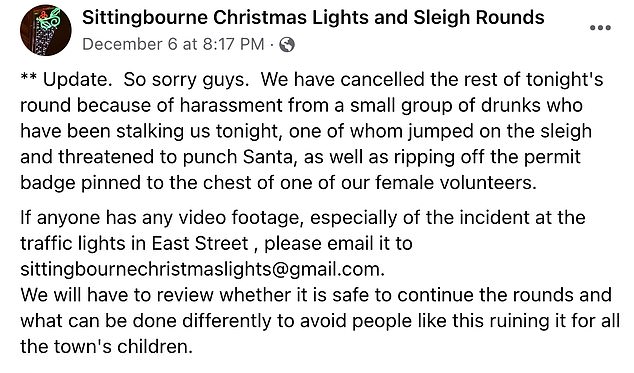 The event, which is organised by Sittingbourne Christmas Lights and Sleigh Rounds, was cancelled and a review is now under way

Despite the incident, organisers hope to continue the rounds but with more security measures in place if possible.

Ms Hoynes added: ‘We will have to review whether it is safe to continue the rounds over the next couple of weeks and to see what can be done differently to avoid people like this ruining it for all the town’s children.

‘Luckily no one was injured, just shaken. We are hoping to continue the rounds with extra safety measures in place.’