Member of people smuggling gang linked to deaths of 39 Vietnamese migrants in Essex lorry is ordered to pay families of the victims £3,000

A member of a people-smuggling gang linked to the deaths of 39 Vietnamese men, women and children has been ordered to pay the bereaved families £3,000.

Alexandru-Ovidiu Hanga, 29, of Hobart Road in Essex – who conspired to assist unlawful immigration – will pay the bereaved families from the £83,000 he made during his ‘criminal lifestyle’, a court has heard.

The victims, including two 15-year-olds, had hoped for a better life in Britain when they agreed to pay up to £13,000 a head for a ‘VIP’ smuggling service, the Old Bailey had heard.

On October 22, 2019, they were crammed into a lorry container to be shipped from Zeebrugge to Purfleet in Essex in pitch black and sweltering conditions.

The migrants suffocated en route and were found dead by lorry driver Maurice Robinson who collected the trailer from the docks early the next morning.

In January, four of the people smugglers were jailed for between 13 and 27 years for manslaughter, while others associated with the lucrative illegal operation received lesser sentences. 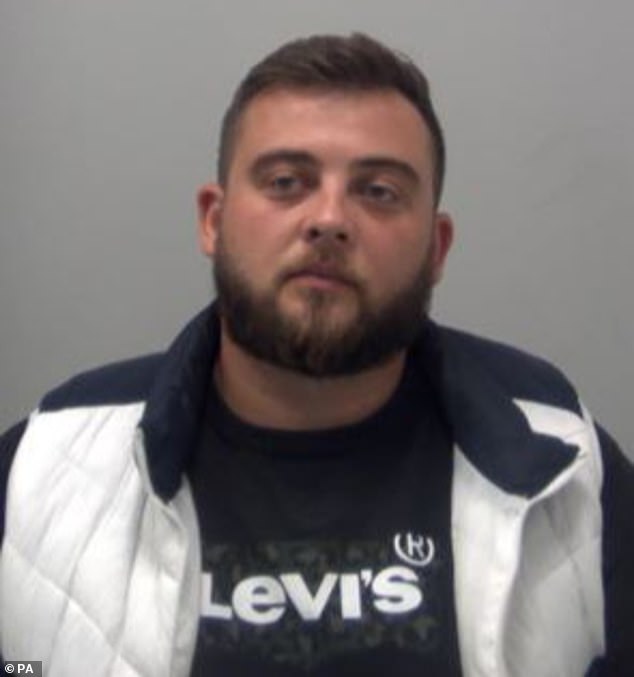 Romanian Alexandru-Ovidiu Hanga, 29, of Hobart Road in Essex, will pay the bereaved migrant families £3,000 from the money he made during his ‘criminal lifestyle’ 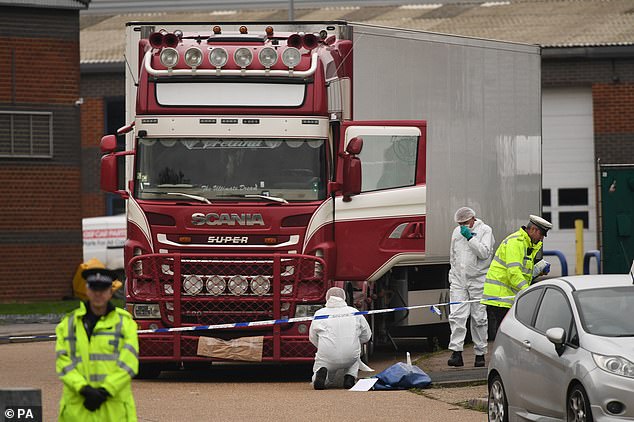 The 39 Vietnamese migrants men, aged 15 to 44, were found dead in the back of a lorry when it stopped in Thurrock, Essex, in October 2019, after it had travelled into the UK from the port of Zeebrugge

Romanian Alexandru-Ovidiu Hanga, 29, of Hobart Road in Essex, was jailed for three years after admitting conspiring to assist unlawful immigration between May 2018 and October 2019.

He collected a number of migrants from a drop-off point in Essex and drove them to a safe house in Dulwich, south east London, a few weeks before the tragedy.

In his sentencing, Mr Justice Sweeney had noted Hanga had shown ‘genuine remorse’ and only got involved because he felt ‘beholden’ to boss Gheorghe Nica, who was ‘not the sort of person to say “no” to’.

At a confiscation hearing at the Old Bailey on Friday, the court was told Hanga had benefitted from his ‘criminal lifestyle’ to the sum of £83,552.

However, prosecutor Jonathan Polnay said the available amount was just £3,000.

The prosecution applied for the money to be confiscated under the Proceeds of Crime Act and that it be used to pay compensation to the victims’ families for funeral expenses and bereavement.

Judge Mark Lucraft QC agreed to the orders and set dates for further hearings later in the year in relation to other defendants. 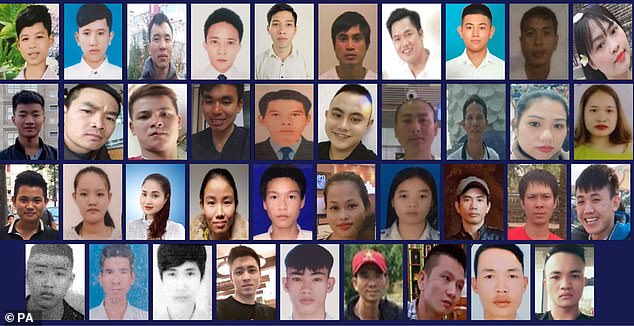 The Vietnamese men, women and children, aged between 15 and 44, were found dead in the back of the trailer in Essex on October 23, 2019

(Top row, left to right) Alexandru-Ovidiu Hanga, Christopher Kennedy, Eamonn Harrison and Gheorghe Nica, Maurice Robinson, Ronan Hughes and Valentin Calota, who were jailed at the Old Bailey in London for their roles in the death of 39 migrants

A graphic used by Essex Police illustrating location of the 39 bodies found inside a container lorry in Grays, Essex

In January, lorry driver Robinson, 26, of Craigavon, who admitted manslaughter and plotting to people smuggle, was jailed for 13 years and four months.

His boss Ronan Hughes, 41, of Armagh, who also admitted the charges, was sentenced to 20 years in prison.

Hughes’s partner in crime Nica, 43, of Basildon, Essex, who was found guilty of the same offences, was handed 27 years behind bars.

Trucker Eamonn Harrison, 24, of County Down, who had collected the victims on the continent, received 18 years’ custody for the manslaughters.

Fellow driver Christopher Kennedy, 24, of County Armagh, was jailed for seven years for his role in the wider people-smuggling operation.

Some of the defendants appeared in court by video link from Belmarsh prison for the confiscation hearing.

Kennedy’s lawyer James Scobie QC said his client was ‘basically a farm boy working in that field doing some driving’.

In his case, the issue for the court was where his money came from.

Not having receipts, Kennedy would have to give evidence to ‘say these were legitimate earnings from him working from the age of 17 onwards’, Mr Scobie said.

In the case of Robinson, the court heard there were ‘exceptional circumstances’ to allow confiscation proceedings, despite the length of time that had elapsed.

Who were the 39 people who died in the Essex lorry container? 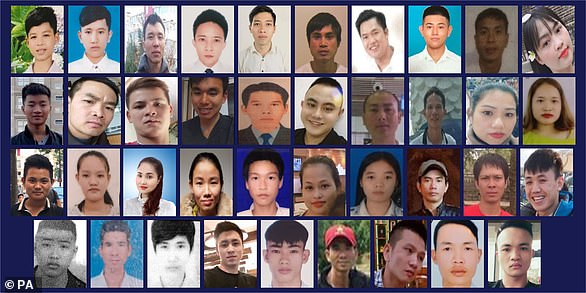 These are the names of the victims of the Essex truck tragedy are:

Pham Thi Tra My, a 26-year-old woman from Ha Tinh

Tran Khanh Tho, a 18-year-old man from Ha Tinh

Tran Thi Tho, a 21-year-old woman from Nghe An

Bui Thi Nhung, a 19-year-old woman from Nghe An

Nguyen Dinh Tu, a 26-year-old man from Nghe An

Tran Thi Ngoc, a 19-year-old woman from Nghe An

Nguyen Van Hung, a 33-year-old man from Nghe An

Hoang Van Tiep, a 18-year-old man from Nghe An

Cao Tien Dung, a 37-year-old man from Nghe An

Cao Huy Thanh, a 33-year-old man from Nghe An

Tran Thi Mai Nhung, a 18-year-old woman from Nghe An

Nguyen Minh Quang, a 20-year-old man from Nghe An

Pham Thi Ngoc Oanh, a 28-year-old woman from Nghe An

Hoang Van Hoi, a 24-year-old man from Nghe An

Nguyen Tho Tuan, a 25-year-old man from Nghe An

Dang Huu Tuyen, a 22-year-old man from Nghe An

Nguyen Trong Thai, a 26-year-old man from Nghe An

Nguyen Van Hiep, a 24-year-old man from Nghe An

Nguyen Thi Van, a 35-year-old woman from Nghe An

Tran Hai Loc, a 35-year-old man from Nghe An