Internal emails from the company that has a multimillion-dollar contract to clean Melbourne’s tram network suggest that cleaning standards were impossible to maintain while staff were underpaid and worked so hard they were put at risk of injury.

The emails, sent by the cleaning company’s own senior managers, come as Yarra Trams staff reported that a cleaner working for the contractor had been seen collecting food scraps from a tram for several weeks so they could eat. 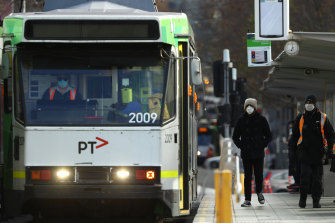 The Age has confirmed that the Fair Work Ombudsman is making inquiries in relation to the cleaning contractor, GJK Facility Services, while Yarra Trams has also launched an independent investigation into the company in the wake of allegations about poor cleaning practices.

GJK is one of Melbourne’s biggest cleaning contractors. It made an $11 million profit last year on revenue of $166 million for its sole shareholder, cleaning mogul George Stamas.

GJK has previously run into strife over allegations of substandard work in its lucrative and long-standing contracts to clean Melbourne’s public housing towers.

Asked last week if he was aware of worker underpayment or claims by Yarra Trams staff that trams and depots were poorly cleaned, Mr Stamas said this was not possible and that he would have known about complaints.

“Wherever we find a breach of payment we normally rectify it immediately,” said Mr Stamas, whose company’s four-year contract with Yarra finishes next year. Yarra has refused to disclose the contract’s value.

The emails, leaked from within GJK, show that a former general manager, Doug Melville, warned his then chief executive Steve Taylor in 2018 that cleaners had “consistently worked ridiculous hours and have been on call 24/7” and were at risk of injury.

“The safety issues I highlighted are more a symptom. We really need to start looking at, and addressing the root cause before someone gets hurt or we suffer significant reputational damage,” he warned.

The cause, he said, was that GJK’s contract with Yarra had “unrealistic budgets, almost entirely contracted staff with unprecedented staff turnover, specifications that were not fully understood or appreciated going in and no in-house people with any experience whatsoever in tram/rail operations”.

Mr Melville told Yarra Trams in January 2018 that he had been approached by several staff working for labour hire companies contracted to GJK who said they had not been paid. And separate emails from early 2018 show that GJK warned a subcontractor of a “substantial potential breach” of their contract after a worker reported that they were not paid.

A cleaner working for a separate subcontractor also complained in text messages to a GJK manager in June 2018 that they were being paid late. Screen shots of the correspondence show the cleaner pleading for help.

“He not paying on time each time late,” the worker wrote. “What we have to do please help us. … we want job please.”

In February 2018, Yarra staff found a cleaner collecting food scraps left on trams after the trams had returned to the depots each night. The cleaner, who staff believed had not been paid for several weeks, was an immigrant with poor English skills and without family or friends.

A worker at the depot loaned the cleaner $100 so they could buy some food.

That same month, Yarra Trams manager Tobias Meyer warned in an internal email that “we do not want Yarra Trams to be involved in any underpayment scandals such as with 7/11”. He strongly advised that background checks be done on labour hire subcontractors, saying “we do have the right to do audits”.

The Fair Work Ombudsman confirmed it is “making inquiries” in relation to GJK in the wake of complaints about working conditions. “We encourage any workers with concerns to contact us directly for assistance,” a spokesman said.

A Yarra Trams spokeswoman said a staff member had complained about GJK's cleaning practices in November, saying Yarra Trams had "launched an external, independent investigation" into the "unsubstantiated allegations … to prove these allegations right or wrong".

"Findings are still pending,” the spokeswoman said. “We're committed to upholding the highest standards of integrity across our organisation, and take claims like these very seriously.”

The spokeswoman also said the company performed routine audits of all its contractors and commissioned external audits on a periodic basis to protect the integrity of the network. GJK’s deep cleans were thoroughly audited every morning during the pandemic, she said.

“We have stringent performance measures in place with our suppliers, which form a crucial part of our contract arrangements.”

In early 2019, staff members raised separate complaints about shortcuts taken on cleaning, with one tram stop that was supposed to be cleaned daily going uncleaned for months, parts of depots being cleaned only sporadically and trams not being cleaned daily for several weeks.

That same year, it also emerged in a series of reports to the Office of Housing, where GJK has held contracts since 2007, that the cleaner was repeatedly awarded government work totalling $80 million despite being fined multiple times for “negligent” service.

Company records show Mr Stamas formed GJ&K Cleaning Services in 1990. He first drew public attention in 2007 when his companies won contracts worth $52 million with the Victorian government to clean public housing towers. Mr Stamas was then, and remains, a close friend of former Labor minister Theo Theophanous and had sponsored a fundraiser held by the Labor figure.

During a sitting of Parliament, then-Liberal leader Ted Baillieu produced an enlarged photograph of Premier Steve Bracks with his arm around the shoulder of Mr Stamas. 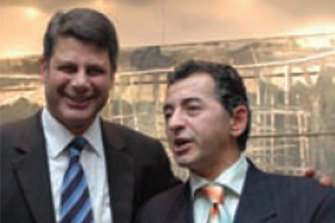 Asked last week why former general manager of health and safety Doug Melville no longer worked for GJK, Mr Stamas said “it was a bit of a legal matter unrelated to the company”.

After speaking briefly on the phone with The Age, Mr Stamas texted to say he was "deeply concerned about some of the insinuations made". He asked that "to avoid any potential inaccurate reporting and potential subsequent legal action", questions be sent to his Sydney-based public relations consultant and hired a defamation lawyer.

The Andrews government has significantly ramped up its spending on cleaning for all trains, trams and buses since March due to COVID-19. Of the $421 million spent on propping up public transport operators during the pandemic, $33.76 million went towards extra cleaning, the state government has confirmed.

Taxpayers forked out $1.3 million a month for extra COVID-19 cleaning on suburban trains, a recent probe by the state’s anti-corruption watchdog IBAC revealed. This was in addition to an existing contract worth up to $40 million.

But transport operators have refused to release the contracts signed for extra COVID-19 cleaning, and keep secret the long-running taxpayer-funded contracts they sign, citing commercial-in-confidence.

The Rail, Tram and Bus Union’s Victorian tram and bus divisional secretary, Tarik Koc, called on the government to intervene by providing more support for cleaners working on the public transport network.

“The government should be looking out for the best interests of the workers who are doing extra COVID-19 cleaning,” he said.

While the union represents some full-time cleaning staff employed directly by GJK, the bulk of workers, who Mr Koc said were largely migrants and students, were retained by subcontractors and were generally out of reach of the union.

“We’re very concerned; these people are the most vulnerable people in our country right now. It’s heartbreaking,” Mr Koc said. “They should be full-time employees so they have a right to join the union and have a collective EBA.”

“We take the utmost care to ensure that they are paid in accordance with the relevant awards and conditions. We have processes in place to ensure that any deviations are addressed promptly.

“GJK has consistently delivered to Yarra Trams’ service requirements and this has been validated through internal and external audits by Yarra Trams, The Department of Transport, and a mystery shopper program.”

He said Mr Melville was not involved in a legal dispute with GJK.

A government spokeswoman said any wage underpayment allegations should be investigated and each operator was required to comply with relevant laws including workplace laws as part of the contract with the state.

“All of Victoria’s trains and trams are subject to enhanced cleaning after every journey and a deep clean every night – giving Victorians the confidence they need to get back on our public transport network.”