‘Has FlyBe just ceased operating in front of my eyes?’ Passengers are turned away as flights are cancelled and ‘planes impounded at airports’ amid growing fears for ailing airline

Flybe planes have been ‘impounded at UK airports’ and passengers turned away amid fears the ailing airline has collapsed.

The low-cost European carrier had been hit by a slump in bookings since the outbreak of the coronavirus.

It was facing fresh doubts over its future after failing to secure a £100 million loan.

This evening, passengers reported being turned away from their flights as staff informed them there would be no more flights.

Peter Smith, an ITV journalist, tweeted: ‘Has FlyBe just ceased operating in front of my eyes?

‘Waiting to board a FlyBe flight to Birmingham and all of their flights have just been cancelled.

‘Advice from staff is FlyBe ‘definitely will not be flying out tomorrow either.” 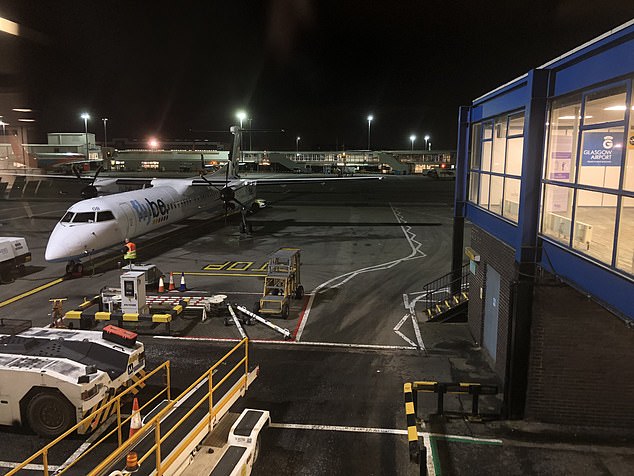 This evening, passengers reported being turned away from their flights as staff informed them there would be no more flights 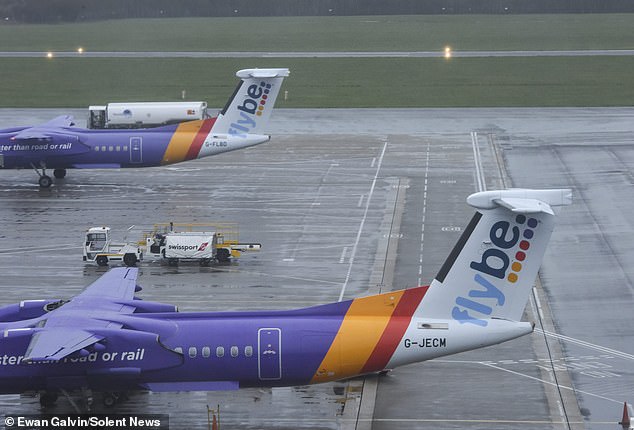 Flybe planes at Southampton Airport today. Flybe serves around 170 destinations and has a major presence at UK airports such as Aberdeen, Belfast City, Manchester and Southampton

Flybe, which has been hit by a slump in bookings due to the virus outbreak, was saved from going bust by the government earlier this year.

People briefed on the regional carrier’s situation told the Financial Times that the company only has enough resources to survive until the end of March.

As part of the January rescue deal, it agreed an arrangement to defer tax payments of ‘less than £10 million’ with HM Revenue and Customs. Ministers also agreed to hold a review into Air Passenger Duty (APD).

The structure of APD – which adds £26 to the price of most return domestic flights such as those operated by Flybe – could be altered in next week’s Budget.

Flybe serves around 170 destinations and has a major presence at UK airports such as Aberdeen, Belfast City, Manchester and Southampton. It flies the most UK domestic routes between airports outside London.

A series of issues have affected the airline’s finances, including rising fuel costs, falling demand, competition from road, rail and other airlines, plus a weakening of the pound.

It was bought by a consortium comprising Virgin Atlantic, Stobart Group and Cyrus Capital in February 2019, but has continued to make losses. 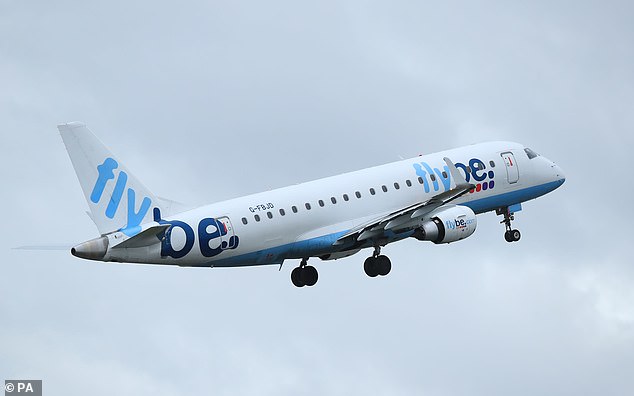 A series of issues have affected Flybe’s finances, including rising fuel costs, falling demand, competition from road, rail and other airlines, plus a weakening of the pound

Rival Ryanair has predicted the drop in demand for flights due to the coronavirus will result in some European airlines failing in the coming weeks.

Wizz Air – which focuses on the central and eastern European markets – said it will reduce flights from March 11 to countries affected by the virus – mostly to Italy – and is looking at cutting capacity by about another 10% between April and June.

The airline said a task force has been set up to ‘address the financial implications of Covid-19’ since the start of the outbreak.

The London-listed Hungarian company did not estimate the size of the hit from the outbreak in the year to March 31, adding that it is ‘difficult to predict the extent and the duration of the outbreak and the impact on the next financial year’.

Chief executive Jozsef Varadi said: ‘Our ever-disciplined attitude to cost enables Wizz Air to partly offset some of the headwinds due to the Covid-19 outbreak, which have driven a temporary decline in demand and an increase in the cost of disruption as we put the well-being of passengers and crew first.’

It comes after rivals have also cancelled flights and reined in routes in response to coronavirus.

The airline had already suspended its flights serving mainland China and reduced the frequency of flights to northern Italy and Singapore.

Ryanair also said on Monday it was cancelling up to one in four flights on some of its routes, particularly those serving Italian airports, while other measures include ‘rolling schedule cuts’, allocating leave or paid leave to pilots and cabin crew, working with suppliers to cut costs and freezing recruitment, promotion and pay across its network.

Wizz Air’s rivals easyJet and Ryanair have also cancelled flights into and out of Italy. 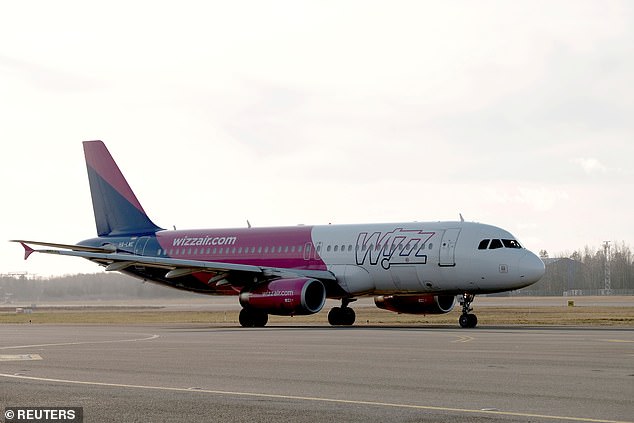 At the time of Flybe’s rescue, rival airlines complained that they should not be penalised for their own success and should also be given a tax holiday.

Garry Graham, deputy general secretary of the Prospect union, said: ‘Flybe provides important transport connections to and from parts of the UK where other viable options often don’t exist. A number of regional airports are highly reliant on Flybe for most or all of their scheduled services.

‘Reports that the Government may fail to provide the loan that is required as part of a package of rescue measures is very worrying. This risks the Government turning its back on these areas of the country and the workers at those airports.

‘The Government needs to come forward with concrete proposals on how it will support the services Flybe provides and is a crucial test of its commitment to every region of the UK.’

Brian Strutton, general secretary of the British Airline Pilots Association, said: ‘The Government made unequivocal promises to keep Flybe flying and loyal staff and passengers rightly expect this Government to keep its word.

‘The delay in ratifying the promised deal is unacceptable because Flybe needs to get on with its business plan for 2020 to secure regional connectivity that the Government places so much emphasis on.’

Downing Street would not comment on Flybe’s situation but stressed the Government’s commitment to regional connectivity.

‘We are firmly committed to promoting and safeguarding regional growth and connections.’

‘Many of Flybe’s routes are unique, the passengers who use those routes and the communities that Flybe serves must not be abandoned.

‘Unite is seeking an urgent meeting with Department for Transport ministers to discuss Flybe’s future.’