Health experts are demanding Victoria’s hotel quarantine workers get personal protective equipment on a par with staff in high-risk COVID hospital wards, as a coronavirus cluster linked with the Holiday Inn hotel grew to eight on Wednesday.

South Australia has flagged its intention to snap the border closed to residents of Greater Melbourne in response to the growing outbreak, with that state’s Chief Health Officer Nicole Spurrier saying she was “very concerned”. 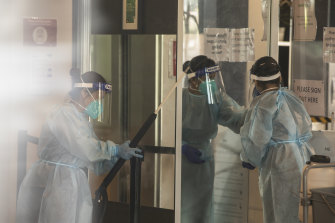 Late on Wednesday afternoon the Department of Health confirmed that two more people connected with the airport Holiday Inn – a hotel quarantine worker and a traveller who finished their mandatory 14-day isolation on Sunday – had tested positive to coronavirus.

The Holiday Inn was evacuated and closed for cleaning on Wednesday.

An authorised officer, a food and beverage worker and another former guest who was on the same floor of the hotel as a family of three returned travellers who later tested positive to the British variant of the virus have also been infected.

With concerns growing that more infectious variants of coronavirus are fuelling frequent leaks from hotel quarantine, experts say Victorian health authorities have not learnt from earlier outbreaks that spread through hospitals and infected thousands of staff. 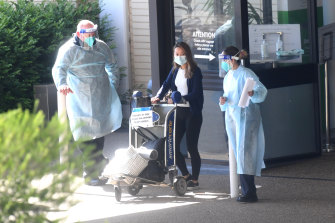 A guest is evacuated from the Holiday Inn quarantine hotel on Wednesday morning. Credit:Joe Armao

“The big question here is why aren’t the lessons we learnt during the second wave about how this virus spread through hospitals being applied to hotel quarantine,” Australian Medical Association Victorian president Julian Rait said.

Despite the government heaping blame on the use of a nebuliser as a source of the outbreak, Professor Rait said the fact a small aerosol cloud could linger in the air or be swept down a hotel corridor infecting staff and guests suggested “worryingly inadequate ventilation controls”.

“It also doesn’t explain the recent cases at the Grand Hyatt or the Park Royal,” Professor Rait said.

Speaking to the media on Wednesday morning, Chief Health Officer Brett Sutton said the “working hypothesis” for the growing outbreak at the Holiday Inn was that a man, who later tested positive to the British variant of the virus and is now in intensive care, had used a nebuliser to treat his asthma.

“[A nebuliser] vaporises medication or liquid into a fine mist and especially when it is used as medication and someone is infectious or later tests positive, that virus mist can be suspended in the air,” Professor Sutton said.

The man who was using the nebuliser is a member of the family who were staying at the Holiday Inn.

The aerosol-based medical device, commonly used by asthma sufferers, was banned for use outside of negative pressure rooms in Victorian hospitals last year after it was believed to have helped fuel transmission in a serious COVID outbreak at a Melbourne hospital.

Vapourising machines, including sleep apnoea machines, will be banned from standard quarantine hotels and bags thoroughly searched. In light of the hotel outbreaks, Victoria will not increase its intake of overseas arrivals to 1310 on Monday as planned.

Nebulisers are used to change liquid medication into a fine mist, which can be breathed in through a mask or mouthpiece but can also quickly fill a room. It is likely when the door of the family’s room at the Holiday Inn was opened particles were blown into the hotel corridor and infected staff.

Burnet Institute epidemiologist Mike Toole said if Holiday Inn hotel workers had been wearing fitted N95 respirators and face shields they would have been unlikely to get infected.

Investigations into outbreaks in the state’s hospitals after the second wave have found coronavirus particles probably travelled through the air through poor ventilation systems infecting hospital workers who had no close contact with sick patients.

A family of five and a woman in her 60s staying at the Park Royal Hotel returned genome testing results for the British strain on different days last week, suggesting the virus had spread between their hotel rooms.

A 26-year-old man who was working at Grand Hyatt in the Australian Open quarantine program also tested positive to the virus, but no direct link has been found between him and any other case yet.

President-elect of the Australian Institute of Occupational Hygienists, Kate Cole, has called for independent review of hotels being used for quarantine by ventilation engineers.

She questioned why occupational hygienists – experts in respiratory protection – were yet to be included in panels of specialists advising governments.

“Fit-tested N95 respirators should … be mandated for all workers and are the minimum level of respiratory protection required for the virus in those facilities,” Ms Cole said.

Fit-testing – which ensures a mask seals to the face – is mandatory for workers dealing with asbestos and silica, but not for all hotel quarantine workers.

Professor Toole wants to see all hotel quarantine workers, regardless of whether they work in a “hot hotel” – which deals solely with people infected with the virus – or a “cold hotel” given high protection, fit-tested N95 face masks, face shields and protective goggles.

COVID-19 Quarantine Victoria Commissioner Emma Cassar said the two infected workers were wearing surgical masks and goggles when they dealt with guests, but all Victorian hotel quarantine workers would now be provided with N95 masks.

Premier Daniel Andrews insisted Victoria had the country’s strongest hotel quarantine system and that other jurisdictions were “copying” his government’s model, drawing the ire of NSW Premier Gladys Berejiklian.

Mr Andrews later said he was “not interested in having an argument with Gladys”.

Anyone who was in Coburg or Reservoir in the 72 hours before February 6 and who is showing any sign of illness should get tested immediately, he said.

Residents of Glenroy, Broadmeadows, Westmeadows and Roxburgh Park are also being asked to get tested if they have any symptoms.

Get our Coronavirus Update newsletter for the day’s crucial developments at a glance, the numbers you need to know and what our readers are saying. Sign up to The Sydney Morning Herald’s newsletter here and The Age’s here.