‘This doesn’t need to be defeat but it damn well feels like it’: Tory MP Tom Tugendhat who served in Afghanistan gets round of applause in Commons after emotional speech on Taliban takeover

A former soldier-turned-Conservative MP warned Afghanistan ‘damn well feels like’ defeat, as he urged a fresh ‘vision’ must be developed to help.

Tom Tugendhat, who served in Afghanistan, was applauded following an emotive Commons speech in which he also recalled his experiences in the country.

MPs returned to Parliament from their summer break for an emergency sitting this afternoon, three days after the country’s capital Kabul fell to the militants on Sunday.

The former soldier touched on the efforts of the military, aid workers, journalists and others before noting: ‘I know that we’ve all been struggling and if this recall has done one thing… I’ve spoken to the Health Secretary, he’s already made a commitment to do more for veterans’ mental health.’

Mr Tugendhat said it was with ‘great sadness’ that he was to criticise the US, noting: ‘To see their commander in chief (Joe Biden) call into question the courage of men I fought with, to claim that they ran is shameful. 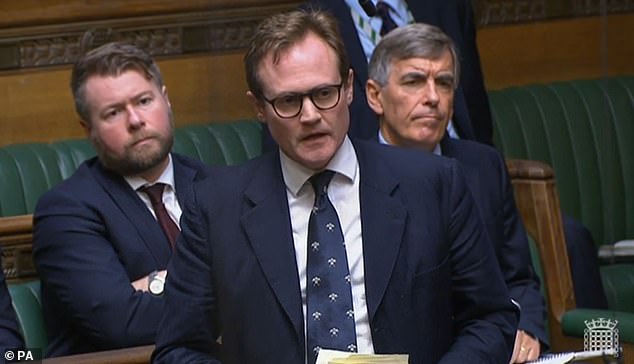 Pictured: Conservative MP Tom Tugendhat served in Afghanistan and gave a powerful speech in the Commons, sharing his experiences, as he said the current situation felt like a defeat

‘Those who have not fought for the colours they fly should be careful about criticising those who have.’

Mr Tugendhat suggested the West and the UK had not shown patience, adding: ‘This is a harsh lesson for all of us and if we’re not careful it could be a very, very difficult lesson for our allies.

‘We can set out a vision, clearly articulate it, for reinvigorating our European Nato partners, to make sure that we are not dependent on a single ally, on the decision of a single leader, that we can work together with Japan and Australia, France and Germany, with partners large and small and make sure we hold the line together.’

He ended by recalling his time as an adviser to the governor of Helmand and the ‘joy’ given to families by the opening of schools for girls, adding: ‘I didn’t understand it until I took my own daughter to school about a year ago.

‘There was a lot of crying when she first went in, but I got over it and it went OK. I’d love to see that continue.’ 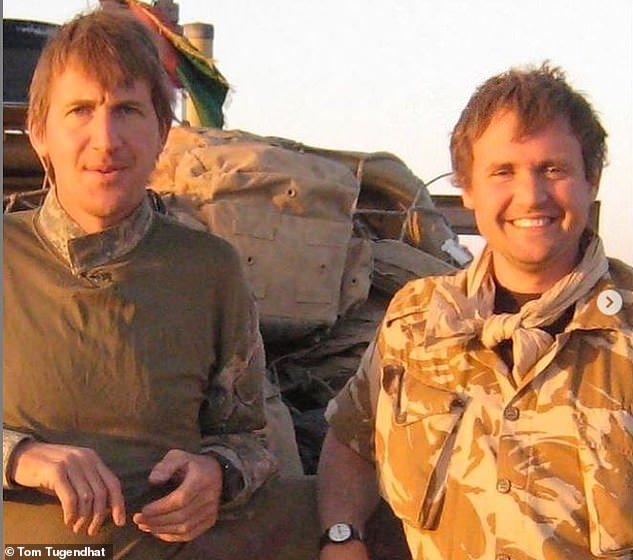 Pictured: Conservative MP Tom Tugendhat (right) shared this photo of himself with Dan Jarvis (now a Labour MP) on active duty together in Afghanistan when they were both in the Army

He left MPs with a second, ‘harder’ image, which he explained: ‘It’s one that the forever war that has just reignited could lead to.

‘It is the image of a man whose name I never knew, carrying a child who had died hours earlier, carrying this child into our fire base and begging for help.

‘There was nothing we could do. It was over.

‘This is what defeat looks like when you no longer have the choice of how to help. This doesn’t need to be defeat but at the moment it damn well feels like it.’

MPs across the house took to social media to praise Mr Tugendhat for his emotional statement.

Conservative colleague Dehenna Davison tweeted: ‘The speech my friend and colleague @TomTugendhat just made in the Chamber is one I will remember for the rest of my life. 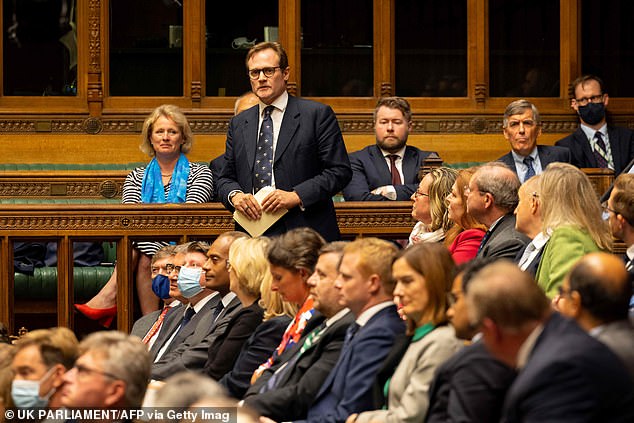 Pictured: Conservative MP for Tonbridge and Malling, Tom Tugendhat speaking during an extraordinary session of parliament called to discuss the collapse of the Afghan government

‘Tom, thank you for sharing your experiences and reflections. I am so proud to know you.’

Labour’s Wes Streeting wrote: ‘Britain is very fortunate to have soldiers like @TomTugendhat and Parliament is very lucky to have his wisdom and experience leading the Foreign Affairs Committee.

‘Magnificent and moving speech during the Afghanistan debate.’

And Liberal Democrat MP Jamie Stone posted: ‘A most extraordinary, moving speech from my brave colleague @TomTugendhat. He is quite right that the situation in Afghanistan is a harsh lesson. It teaches us how crucial it is that we work collectively with our NATO partners, as opposed to being dependent on just one ally.’

He said: ‘President Biden said this week that his only vital national interest in Afghanistan was to prevent a terrorist attack. 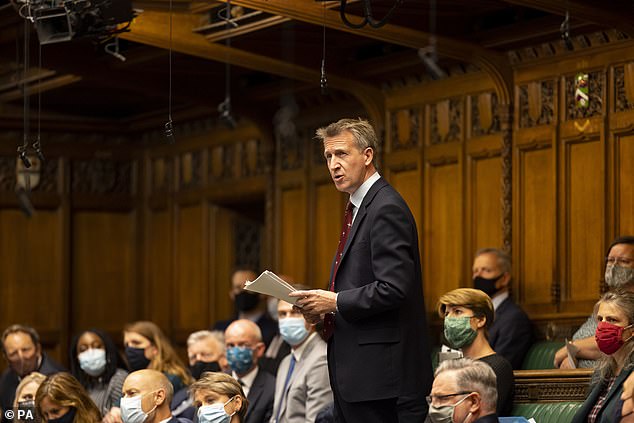 Pictured: Former soldier Dan Jarvis, Labour MP for Barnsley Central, who served in the British armed forces in Afghanistan, hit out at US President Joe Biden for criticising the Afghan forces

‘Even if that is the case, both he and President Trump should be deeply ashamed, and I say this with great sadness, because their actions have returned Afghanistan to the very government that harboured the 9/11 bombers.’

Dan Jarvis, Labour MP for Barnsley Central, who served in the British armed forces in Afghanistan, spoke of the service and sacrifice of the ‘brave’ British servicemen and women ‘who throughout showed outstanding professionalism and courage’.

He went on: ‘It was particularly distasteful and dishonouring of President Biden to make reference to the lack of courage and commitment by those Afghan soldiers who have served with such bravery and distinction.’

He added: ‘The Prime Minister must not wriggle out of his commitments on this issue.

‘The Office for Veterans’ Affairs is nothing like it was designed to be and he knows that.’