Sydney newspaper The Daily Telegraph has been ordered to pay high-profile criminal defence lawyer Chris Murphy $110,000 in damages after the Federal Court found he was defamed by a column claiming he was battling the “ravages of age” and deafness.

Mr Murphy, 72, launched defamation proceedings against the Telegraph in November last year over an October 10 column by journalist Annette Sharp, who wrote that he was battling “the ravages of age and with it the associated deafness that has kept him from representing his clients in court during the past year”. 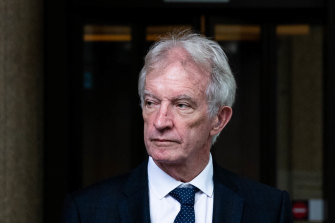 In documents filed in court, Mr Murphy’s lawyers said the column conveyed five false and defamatory claims about their client, including that “as a lawyer [he] was incapable of representing his client’s interests in court by reason of the ravages of age and associated deafness”.

The court is the final arbiter of which defamatory meanings are in fact conveyed by an allegedly defamatory publication.

In his judgment on Monday, Federal Court Justice Michael Lee found this meaning but none of the others was conveyed by the column and awarded Mr Murphy damages of $110,000 for non-economic loss. Interest on that sum will be calculated at a later date. Justice Lee declined to award aggravated damages.

The column was “largely a gossipy and intrusive piece” about Mr Murphy and his separated, painter wife Agnes Bruck, Justice Lee said.

Damages for non-economic loss in defamation cases are capped at $421,000, a figure that is adjusted annually for inflation. Mr Murphy’s payout sits at the lower end of the spectrum.

Mr Murphy’s barrister, Sue Chrysanthou, SC, told the court during the trial that the column portrayed him as the “decrepit figurehead” of his firm.

But Dauid Sibtain, for the Telegraph, had said the column did not convey any of the defamatory meanings alleged by Mr Murphy’s lawyers. As a fallback defence, the Telegraph argued that the alleged meanings were substantially true.

Mr Sibtain said the Telegraph was not suggesting Mr Murphy was “too old to do anything” in law, but he was “too old to go to court” last year because he was at higher risk during the COVID-19 pandemic, a claim Ms Chrysanthou rejected.

Justice Lee rejected the truth defence in respect of the one meaning he found was conveyed by the column.

While the column did not reflect on Mr Murphy’s character, Justice Lee said it was was “defamatory of him as a professional” because the defamatory meaning went to “an important aspect or function of his professional work”.

The court heard Mr Murphy has a longstanding hearing impairment and uses a hearing aid, along with wireless microphones in crowded settings. Ms Chrysanthou told the court technological developments meant Mr Murphy’s ability to hear had “improved, as opposed to degenerated”.

The court heard Mr Murphy had wanted on-screen captions during one proposed online court hearing last year, but ultimately the hearing did not proceed.

Mr Murphy, who has not appeared in court for a client since 2017, insisted during the trial that “my hearing ability has absolutely nothing to do with me not appearing in court”. He described himself as a tactician whose work for many years has been conducted outside court.