Cherry lovers should expect prices to go up this Christmas, with recent bouts of heavy rain – linked with the recently declared La Nina weather pattern – damaging Victoria’s stone fruit crops as harvesting gets under way. 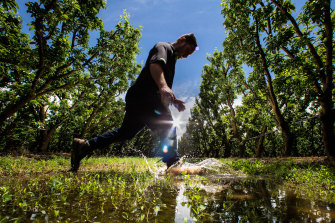 “It feels like the rain has been booked in every weekend for the past five weeks,” he said. “There’s been no reprieve.”

Fruit Growers Victoria services manager Michael Crisera estimated there had been a 50 per cent drop in the cherry yield sent to the consumer market, with heavy rain splitting much of the fruit.

“The wet weather we’ve had in NSW and Victoria is definitely having an impact on our cherry crops,” said Mr Crisera, who expected there would be price rises, but was unclear how much more consumers were likely to pay.

Recent downpours have made for tricky conditions for many farmers with stone fruit harvesting delayed by more than a week in some regions.

Mr Conti, who grows stone fruit, apples, pears and citrus – though not cherries – insisted farmers were putting in a huge effort now to pick ripe fruit from the trees.

“For us, it’s only the start, and we’ve got a lot of good, fresh tasting fruit to come. But it will be later in the summer.”

Heavy rain late in November, when stone fruit is ripening, can result in damaged fruit and lower yields that, in the most extreme cases, can drive up prices for consumers.

Mr Conti said the wet weather was most likely to result in cosmetic blemishes and scratches to some stone fruit that can make it appear less attractive visually, but has no bearing on the taste. 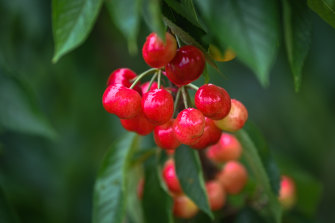 Christmas cherries are set to go up in price.Credit:Justin McManus

“Some of the sweetest fruit is sometimes the one that has a slight mark or blemish.”

Mr Conti, who is vice-president of Cobram and District Fruit Growers, began picking apricots this week, and usually harvests about 200 tonnes a year.

He hoped stone fruit from the Murray Valley would be plentiful in time for Christmas lunches as long as the region is spared prolonged bouts of heavy rain.

Fruit fungus is also a threat in sustained wet weather and Mr Conti said farmers were spraying fungicides to prevent rot that can destroy a crop. 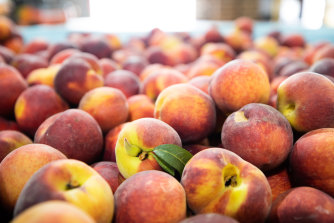 Recent rain on Adrian Conti’s farm is threatening to damage some of the stone fruit. Credit:Jason South

Grape growers are also hoping to avoid heavy rain in the first quarter of the year when harvesting begins.

Australian Grape and Wine chief executive Tony Battaglene said the La Nina pattern was a worry. “We’re absolutely concerned about it, but there’s not much we can do,” he said.

Mr Battaglene said the wet weather would create more work through spraying and reduce profitability for growers, but he did not expect it would flow through to consumer prices for wine.

On Tuesday the Bureau of Meteorology declared a La Nina weather patten that will bring cooler than average daytime temperatures and more rain.

He said heavy rain at harvesting time could result in damaged crops, which would create extra stress for farmers.

“They’re really concerned about what’s going to happen from here,” he said.

Worker shortages have also created more headaches for farmers who are now facing the busiest time of the year. With international borders closed during the pandemic, many farmers have been urging Victorians to try their hand at fruit picking.