This is the dramatic moment a huge cargo ship smashed into a dock in Brazil while attempting to sail out to sea – sending workers running for their lives.

The Cap San Antonio, a Denmark-flagged vessel operated by German firm Hamburg-SUD, was attempting to leave port in Santos, near Sao Paulo, on Sunday when the accident happened.

Video shows the ship – which is as long as the Eiffel Tower is tall – smashing into a pontoon used for loading passenger ferries as it tries to leave the port, ripping a hole in the side of the vessel. 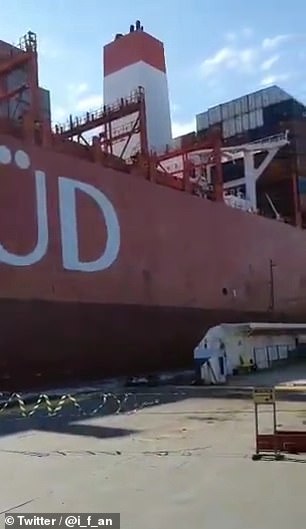 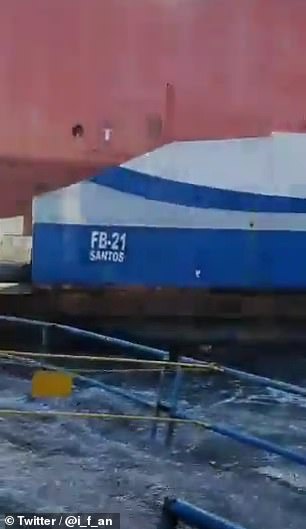 This is the moment the Cap San Antonio, a Denmark-flagged vessel operated by German firm Hamburg-SUD, smashed into a ferry-loading pontoon while leaving port in Brazil

Meanwhile more footage shows dock workers scrambling to get out of the way as the pontoon is ripped free, causing some parts of the dock to sink and leaving a trail of debris floating on top of the water.

The crash took place on Sunday afternoon as the San Antonio was heading from Santos to Paranagua, a relatively-brief 180-mile sail to the south.

As the ship was leaving Santos it hit part of the dock with its port side, dragging away a pontoon that was attached to the dock.

The pontoon remained stuck and was dragged ‘for some time’ according to specialist shipping publications, before it eventually broke free.

That left a large hole visible in the side of the ship that was leaking water, suggesting the vessel punctured its ballast tank.

Cargo vessels typically have several ballast tanks that are filled and emptied of water as the ship loads and unloads its cargo to help it remain stable in the water.

After the accident, the ship was anchored at Santos so the crash could be investigated and the breach repaired, Maritime Bulletin reported.

Authorities have not yet said what they believe caused the crash.

The Cap San Antonio is one of 10 container ships built for Hamburg-SUD and completed construction in 2014. The vessels are 1,090ft long and 160ft wide.

By comparison the MV Ever Given – the container ship which got stuck in the Suez Canal – measured some 1,300ft long by 190ft wide.

The accident also recalls a similar – though far more serious – smash at a Taiwanese port that took place two weeks ago.

During that accident, the 1,040ft-long, 150ft-wide OOCL Durban – operated by Orient Overseas – smashed into a dock in Kaohsiung port on June 3.

The cause of that crash has not been established, with the shipping company saying the vessel was not badly damaged.