London: Buckingham Palace has refused to back the Duke and Duchess of Sussex in a row with the BBC over whether the couple sought the Queen’s permission to name their daughter Lilibet.

Lawyers instructed by the couple said it was “false and defamatory” for the corporation to suggest the couple did not ask the Queen if they could use her highly personal pet name for their second child.

Prince Harry and Meghan claimed they would not have used the name if the Queen had not been “supportive” of their choice. The Palace, rather than confirming their version of events, refused to deny suggestions that the Queen was “never asked”. 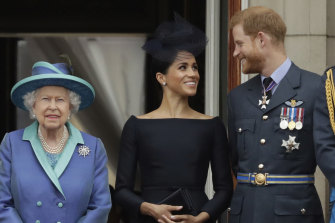 Queen Elizabeth II, with Meghan and Prince Harry in 2018. The Sussexes insist they rang the Queen to ask her about their daughter’s name shortly after the birth. Credit:AP

“The Duke spoke with his family in advance of the announcement, in fact his grandmother was the first family member he called,” she said.

“During that conversation, he shared their hope of naming their daughter Lilibet in her honour. Had she not been supportive, they would not have used the name.”

Royal sources drew a distinction between being told of the name and being asked. It suggests the Queen was put in a position where she had a choice of either giving her approval, tacitly or explicitly, or ordering the couple to change their daughter’s name.

Lilibet Diana Mountbatten-Windsor, who will be known as Lili, was born last Friday at Santa Barbara Cottage Hospital in California, weighing 3.5kg

The Queen was introduced to her 11th great-grandchild on a video call when the Duke and Duchess returned home from hospital.

It is not known when the Queen or other members of the Royal family will meet her in person.

Two of the Queen’s granddaughers, Princess Eugenie and Zara Tindall, chose to give their sons the middle name Philip after the late Duke of Edinburgh, who died in April and would have turned 100 but royal sources suggested that there was a distinct difference between naming a baby after a close family member and giving a baby someone else’s personal pet name.

Although the Duke and Duchess described Lilibet as the Queen’s “family nickname” in a statement issued at the time of their daughter’s birth, it was only ever used by those of the Queen’s generation and older, including Prince Philip. As a toddler the Queen was unable to pronounce her own name, and pronounced it Lilibet.

The Duchess of Sussex is expected to call the Queen Your Majesty or Ma’am.