A British tourist has given birth in the back of a police car on the island of Menorca.

The holidaymaker was helped out by the officers after her waters broke on a residential estate called Ses Salines in the municipality of Es Mercadal.

The unnamed woman gave birth on the back seat of their patrol car as she was being rushed to Menorca’s state General Mateu Orfila Hospital.

The officers helped deliver a healthy baby girl, despite the fact she was born prematurely, and mum and daughter are said to be doing okay.

The child was airlifted to Son Espases Hospital located roughly 40 miles away in neighbouring Majorca, to receive specialist treatment from the neo-natal unit, while the mother remained in the hospital in Menorca.

Police sources said the couple had been dining together in a restaurant when the woman’s waters broke prematurely. 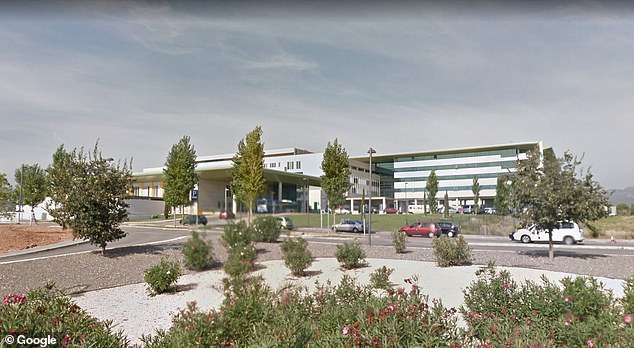 The child was airlifted to Son Espases Hospital located roughly 40 miles away in neighbouring Majorca, to receive specialist treatment from the neo-natal unit

A spokesman for the Civil Guard said: ‘On Monday afternoon a police patrol consisting of two officers, one of them a trainee, went to assist a pair of tourists on the Ses Salines residential estate.

‘The couple raised the alarm after the woman went into labour.

‘The officers realised her waters had broken and went to immediately transfer her to General Mateu Orfila Hospital while medical services were coordinated.’

The spokesman added that the woman gave birth in the back of the car as it sped towards the hospital, where he said medical staff swiftly took them in before the daughter was airlifted later that evening to Son Espases hospital to receive specialist care due to the premature birth.

A police source said: ‘A police patrol saw there was a crowd of people and went to investigate.

‘When the ambulance didn’t arrive they decided to take the pregnant tourist to hospital themselves.

‘The alarm was raised around 8pm on Monday at a restaurant where the couple had been enjoying a meal.’

Another source added: ‘The baby’s fine. As she was born prematurely she’s in a neo-natal unit and that’s why she needed to be transferred to Son Espases in Majorca.’

Pre-pandemic, the island of Menorca (population 90,000) would welcome 1.7 million tourists each year with British visitors making up its largest market, but it’s still waking from its lockdown slumber.

The Balearic islands are currently on the UK’s ‘amber list’, meaning fully vaccinated travellers are not required to quarantine on return, but must take a pre-departure lateral flow test before returning to the UK and a ‘day two’ PCR test having returned to the UK.

British tourists are not required to isolate on arrival but must show proof of vaccination status or a negative PCR test.