Boris Johnson could lose a key vote on vaccine passports after Michael Gove promised critical MPs they will get their say over the Government’s Covid plans.

Michael Gove promised MPs who are critical of the vaccine passport system – which could see pubs forced to demand proof of a Covid jab prior to entry – a chance to vote against Mr Johnson’s proposals.

Chancellor of the Duchy of Lancaster Mr Gove is heading up a Government review into the scheme. Concrete plans on what the scheme would entail are yet to be drawn out.

He spoke to MPs about the measures on the phone last week after concerns were raised about the plans – which were blasted as ‘absurd’ and ‘unworkable’ by pub bosses.

It comes as chairman of the 1922 Committee of backbench MPs Sir Graham Brady today blasted vaccine passports as ‘intrusive, costly and unnecessary’.

He said the UK is currently in an ‘enviable position where more than half the population has got antibodies’ – with the number of people with jabs continuing to grow. 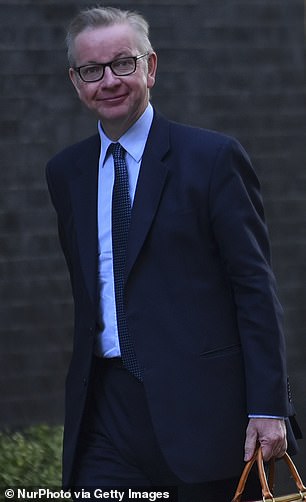 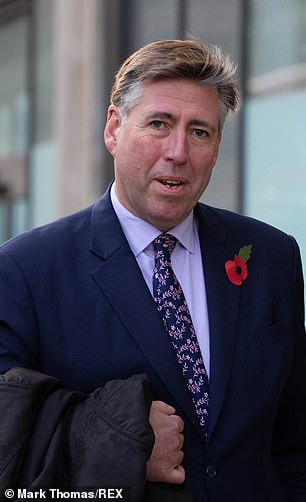 Boris Johnson could lose a key vote on vaccine passports after Michael Gove (left) promised critical MPs they will get their say over the Government’s Covid plans. It comes as chairman of the 1922 Committee of backbench MPs Sir Graham Brady (right) today blasted vaccine passports as ‘intrusive, costly and unnecessary

One MP who took part in the call told The Daily Telegraph: ‘Michael made a very clear statement on the call with MPs that there would be debates and votes before anything like this came into force.’

In a cross-party letter on Friday, 72 MPs – 41 of which were Tories – branded the Covid passport idea ‘divisive and discriminatory’.

If more than 60 Conservative MPs vote against the measures – alongside all members of the opposition – the vaccine passport plan would fail to get through the Commons in an embarrassing defeat for the PM.

And Labour leader Keir Starmer last week hinted that his party could line up alongside Tory rebels to oppose the idea, and suggested needing a passport to go to the pub would be un-British.

Yesterday it was revealed that the Government is set to launch of a pilot scheme that will use the FA Cup Final and a Liverpool nightclub to test ways for the UK’s nightlife scene to burst back into life after Covid. 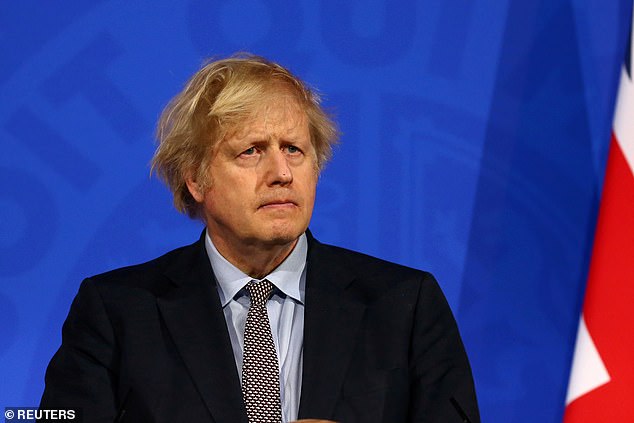 Michael Gove promised MPs who are critical of the vaccine passport system – which could see pubs forced to demand proof of a Covid jab prior to entry – a chance to vote against Mr Johnson’s proposals. Pictured: Boris Johnson

Mr Johnson is expected to announce a wave of pilot events in April and May where proof of a jab will be required for entry, to avoid the need for social distancing.

They include 21,000 fans at the FA Cup Final at Wembley, spectators at the World Snooker Championship in Sheffield and a mass participation run in Hatfield, Hertforshire.

And sports minister Nigel Huddleston confirmed yesterday afternoon: ‘It is not just about certification actually, in fact the earlier programmes, the earlier pilots almost certainly won’t involve any element of certification but it will involve testing, making sure people are tested before and after the event.

‘What we will be looking at is the mitigation measures, so the ventilation, one-way systems, hygiene measures, all of those kind of things to help inform long term decision making.’

Ministers are due to report with their initial findings on vaccine passports today.

But it is understood that no decision on the measure has yet been made regarding whether pubs will have to force drinkers to show Covid passports, with evidence still being assessed. 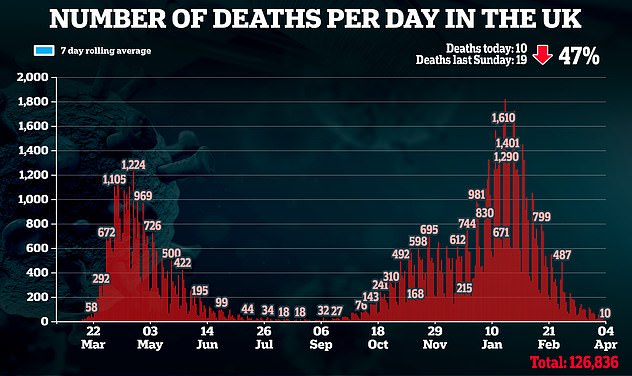 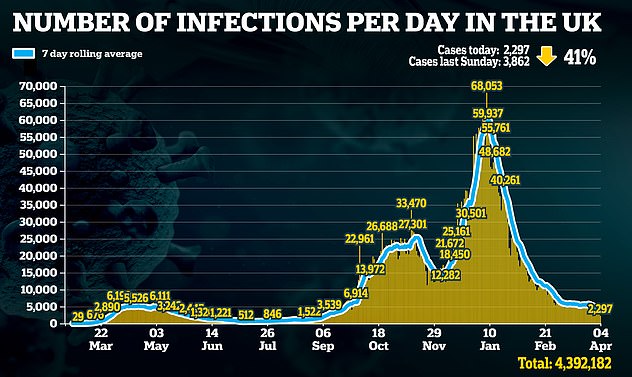 One Tory MP – who asked not to be named – last week said on the potential for the Government to lose a vote on vaccine passports: ‘If Labour are not onside that puts it in a totally different position.’

Another Tory MP warned against rolling out domestic certificates as they said some people may be unable to have a jab and therefore the policy would result in an ‘unfair two-tier system’.

Ipsos Mori revealed that 62 per cent of Britons would back their introduction for people wanting to go for a pint or a meal with their family and 63 per cent want them to be used for people going to the gym.

Almost eight in 10 people (78 per cent) polled supported people having to show proof of a coronavirus vaccine to travel abroad or visit people in care homes.

And there was strong backing for them to be required to work as a frontline NHS medic or in a care home (79 per cent) as well as in schools (69 per cent).

He said he agreed with Sir Keir that they were ‘un-British’, telling LBC radio: ‘We wouldn’t do this for flu, flu can kill up to 25,000 people a year.

‘Vaccines will reduce this illness to killing a lot less than that every year, then we will have to accommodate it, but not by giving up our basic freedoms.’

Yesterday’s Covid data showed a further ten people died after testing positive in a 47 per cent drop on last Sunday – but Wales and Northern Ireland’s data is not included due to Easter delays.

Sunday marked the second day in a row that just ten deaths had been recorded.

The Government’s official data also revealed a further 2,297 people tested positive for coronavirus yesterday, a 40.5 per cent drop on that day last week.

But cases and deaths figures over Easter were affected by incomplete data and a longer-than-usual lag in reporting.

Northern Ireland and Wales did not report any deaths or cases because of the delays.

As Britain saw its first weekend since lockdown rules were relaxed to allow outdoor mixing in groups of six, the country’s vaccine total triumphantly hit 36,904,755 on Saturday.

April is expected to the be a month of second doses because millions are due their second jab as the 12 week deadline approaches.