Restaurants are reporting a bump in bookings as the Melbourne Money scheme restarts, enabling diners to claim back a portion of the cost of their bill.

Under the scheme, diners can claim back 30 per cent of the bill when they eat at a restaurant or cafe in the city from Monday to Thursday if they spend between $50 and $500.

Bomba restaurant co-owner Kelly O’Loghlen said the level of demand once the venue reopened had been a surprise and was stronger than when the city came out of lockdown last year. 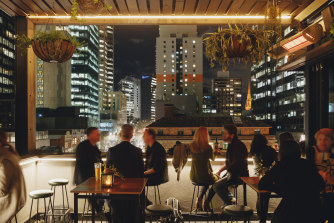 Bomba has had an increase in bookings this week.

“We thought there would be a bit more trepidation this time around, but we are seeing people are very comfortable and confident coming out,” he said. “Demand has been higher than we can facilitate.”

Mr O’Loghlen said while it was early days there had not been a lot of COVID-19 spread in hospitality venues and diners were respectful of the vaccination protocols and confident that the people looking after them and people sitting next to them were vaccinated.

Bomba, in Lonsdale Street, had 82 people booked for dinner on Monday night, which Mr O’Loghlen said was a strong Monday. There were 52 bookings the previous Monday.

However, he said it was hard to tell how many of the bookings could be attributed to the Melbourne Money scheme, which coincided with the peak Christmas hospitality season and CBD theatres reopening.

A total of $8 million was claimed under the scheme last year, although restaurants and cafes have little insight into who is using the program as claims are made through a website rather than hospitality venues directly.

“There were a lot of emails of people trying to claim receipts that they had lost, but that was about it,” Mr O’Loghlen said. “It’s a good move to limit it to weekdays as you are full in the CBD on the weekends anyway – if you are not it is a problem. [Melbourne Money] will help some people out; some people will claim money that they would spend anyway.”

This year $5 million is available under the scheme and the amount claimable has increased from 20 per cent to 30 per cent.

Bookings have also picked up this week at Little Collins Street restaurant La Madonna, which opened during the pandemic.

“Last time we were busy every night as soon as it was announced and there were lots of inquiries of how to handle it, so we knew it was coming from that,” he said. “Targeting midweek days is a clever move. If there are any days that are a bit quieter it is likely to be midweek.”

La Madonna was booked out on Monday night with 40 bookings. The figure for last week was about half that.

“Hopefully it will be busier than normality as everyone will be playing catch-up,” Mr Ness said. “For us the biggest thing is to get the offices back open and the workers back to the city, as that is where we see a lot of room bookings and lunch business. We need the workers back and offices filled.”

In pubs, spending was up 15 per cent compared with the lockdown average but still 19.7 per cent down on normal spending.

Last time the city was out of lockdown, weekday pedestrian activity remained at 60 per cent of pre-COVID-19 levels, while activity on weekends was as high as 85 per cent.

“It’s clear we need to help our city business owners during the week, so we want people to make a day or night of it by grabbing a rebated meal and supporting other retail and entertainment businesses while they’re here,” Cr Capp said.