Democratic presidential candidate Joe Biden took a narrow lead over President Donald Trump in the battleground state of Georgia for the first time on Friday, putting the White House within his reach as it and other undecided states continue to count ballots.

Biden has a 264 to 214 lead in the state-by-state Electoral College vote that determines the winner, according to Associated Press. Winning Georgia's 16 electoral votes would give the former vice-president the 270 he needs to secure the presidency, but only if he also holds Arizona.

Biden, 77, would become the next president by winning Pennsylvania, or by holding Arizona and winning either Georgia or Nevada. Trump's likeliest path appears narrower – he needs to hang onto both Pennsylvania and Georgia and also to overtake Biden in either Nevada or Arizona. 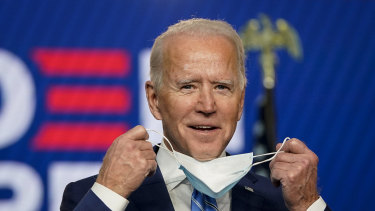 Joe Biden had been trailing Donald Trump in Georgia until counting resumed early on Friday.Credit:Getty

Biden is now ahead by 917 votes in Georgia, where counting continued early on Friday local time.

The shift in Georgia came hours after Trump appeared at the White House to falsely claim the election was being "stolen" from him.

Trump had seen his lead steadily shrink in Georgia, a Southern state that has not voted for a Democratic presidential nominee since 1992, as officials worked through tens of thousands of uncounted votes, many from Democratic strongholds such as Atlanta.

The Georgia secretary of state reported late on Thursday local time there were about 14,000 ballots still to count in the state.

The state also will have to sift through votes from military personnel and overseas residents as well as provisional ballots cast on Election Day by voters who had problems with their registration or identification.

Biden has been steadily chipping away at the Republican incumbent's lead in Pennsylvania as well. His deficit had shrunk to just more than 18,000 there by early on Friday local time, and was expected to continue falling with many of the ballots still to be counted being cast in Democratic areas.

Biden also maintained slim advantages in Arizona and Nevada. In Arizona, his lead narrowed to about 47,000 early on Friday and in Nevada he was ahead by about 11,500 votes.

As the country held its breath for a result in the White House race, Georgia and Pennsylvania officials expressed optimism they would finish counting on Friday local time, while Arizona and Nevada were still expected to take days to complete their vote totals.

Get our Morning & Evening Edition newsletters