A Bayside real estate agent has pleaded guilty to child exploitation charges after he and another man filmed themselves having sex with a 16-year-old girl before circulating video footage.

In the Melbourne Magistrates Court on Thursday, Paul Torok, 51, admitted to meeting the schoolgirl on a social networking site called Skout in 2019, before contacting a 65-year-old male associate and sending him images of the girl. 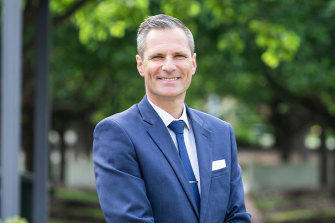 He said to his associate: “I have a proposition. I have a friend who want [sic] to be with two men. But she’s young.”

“The younger the better,” the 65-year-old associate responded.

Torok picked up the victim from her school on November 20, 2019, and then drove her to a St Kilda house, where both men had consensual sex with the teenager.

They both used mobile phones to film the sexual encounter and later sent videos to other associates.

Torok’s home in Port Melbourne was raided by detectives from the Bayside sexual offences and child abuse investigation team on September 2, 2020, when they seized his phone and a small quantity of drugs.

The 65-year-old associate, who was also charged with unrelated child exploitation offences, was sentenced in April to a minimum of nine months in prison, but has appealed his sentence and cannot be named for legal reasons.

The court was told that Torok had about 190 consensual sexual partners in the year before his arrest, and was a member of a swingers group.

Dermot Dann, QC, acting for Torok, said his client had engaged in an “unorthodox and extravagant lifestyle”, which was often accompanied by illicit drug use.

Mr Dann told the Magistrates Court on Thursday that Torok had attended 23 counselling sessions since his arrest in an attempt to gain insight into his behaviour and its impact on the victim.

He requested that Magistrate Greg McNamara consider a community corrections order for Torok, who was a drama teacher at Haileybury College until 2015, before becoming a real estate agent in Melbourne’s bayside suburbs.

A prosecutor said the gravity of Torok’s offending mandated a custodial term.

Torok will be sentenced at a later date.

If you or anyone you know needs support, you can contact the National Sexual Assault, Domestic and Family Violence Counselling Service on 1800RESPECT (1800 737 732).