Ecuador prison gangs linked to drug cartels killed at least 68 inmates and injured 25 in a gun battle bloodbath that lasted eight hours and took at least 900 police officers to break up.

The carnage in the Guayaquil prison began just before dawn as a battle for control over a section of the prison between rival groups after a gang leader was released early.

‘As this section of the prison was without a ringleader, other gangs tried to… enter to carry out a total massacre,’ Pablo Arosemena, governor of Guayas province, told reporters Saturday.

According to Arosemena, there were about 700 prisoners in the area of the facility where the deadly riot was taking place and in the initial fighting, inmates ‘tried to dynamite a wall to get into Pavilion 2 to carry out a massacre. They also burned mattresses to try to to drown (their rivals) in smoke.’

‘We are fighting against drug trafficking,’ Arosemena said. ‘It is very hard.’

Police drones flown over the prison revealed that inmates in three pavilions were armed with guns and explosives that authorities say were smuggled into the prison through vehicles that deliver supplies and sometimes by drones. 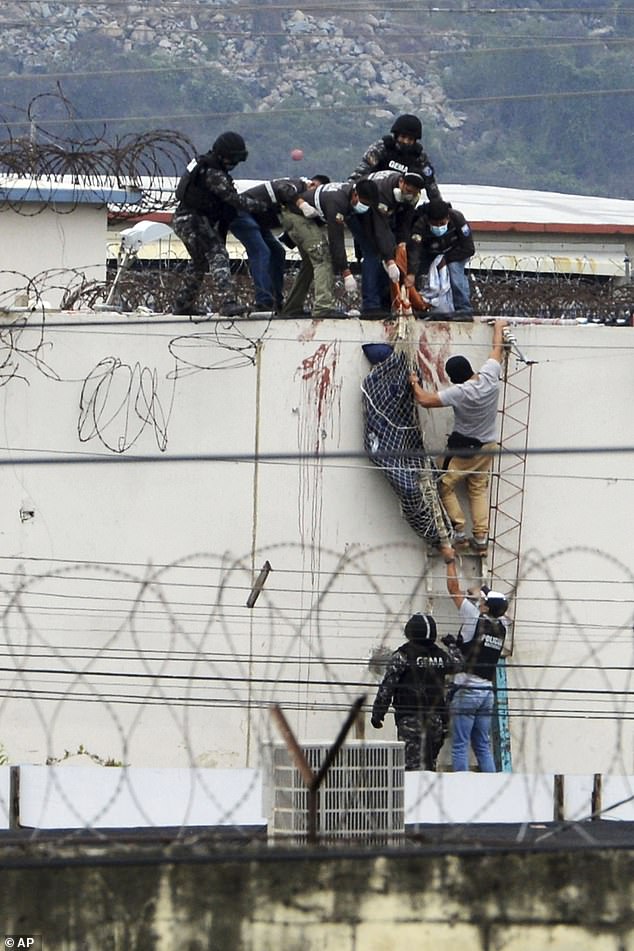 Police lower the body of a prisoner from the roof of the Litoral penitentiary, where a deadly gun battle broke out Saturday among gangs 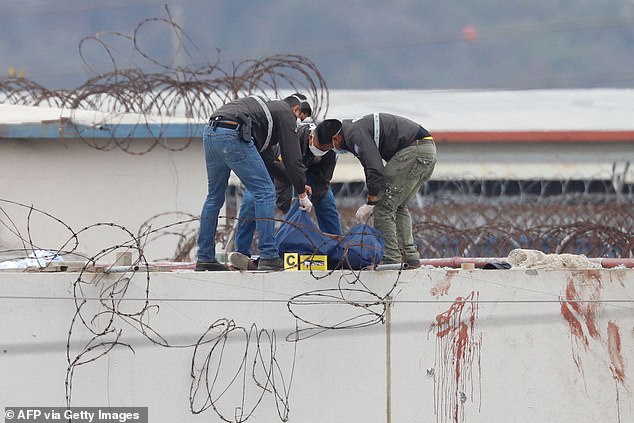 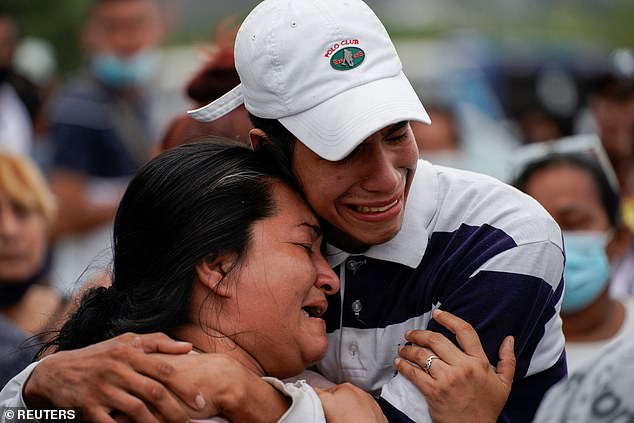 Gruesome videos of the deadly riot currently circulating on social media showed dead bodies lying around burning flames on the ground inside the prison appearing to be stabbed by rioters.

The situation continued for hours until after nightfall when presidential spokesman Carlos Jijón finally announced that ‘the situation is controlled throughout the penitentiary’ after nearly 900 police officers intervened.

On Twitter, President Guillermo Lasso offered his condolences ‘to the families who have lost loved ones’ and said new measures were needed to ‘fight the mafias that profit from chaos’.

The bloodshed came less than two months after fighting among gangs killed 119 people at the prison, which houses more than 8,000 inmates.

The prison violence comes amid a national state of emergency decreed by President Guillermo Lasso in October that empowers security forces to fight drug trafficking and other crimes.

On Saturday Lasso criticized the Constitutional Court’s recent refusal to allow the military into prisons despite the state of emergency, tweeting  ‘the first right that we should guarantee should be the right to life and liberty, which isn’t possible if security forces can’t act to protect.’

Ecuador´s penitentiaries are seeing a wave of brutal violence. 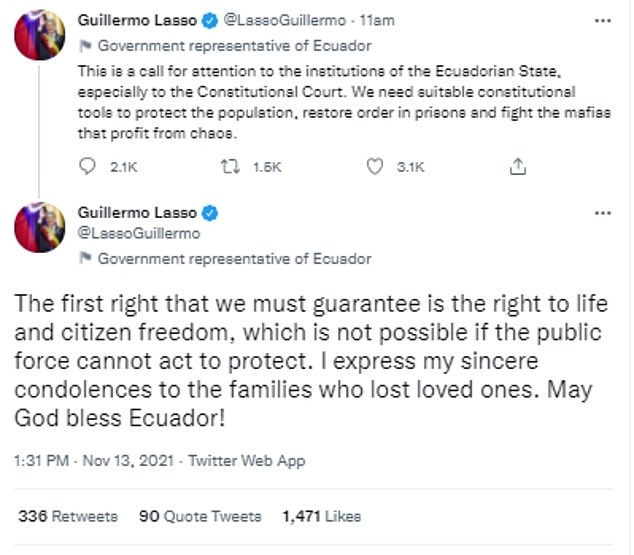 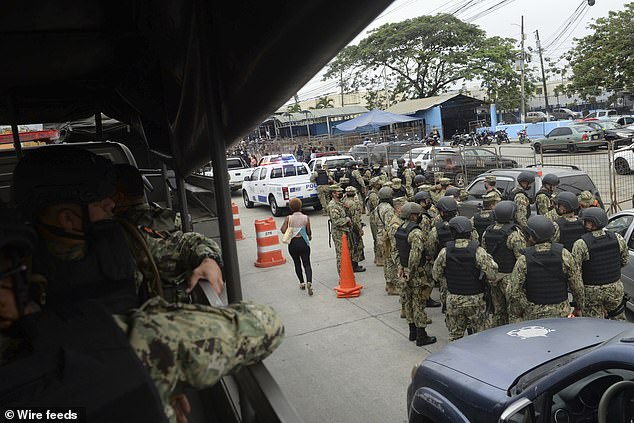 Security forces arrived after the rioting broke out on Saturday 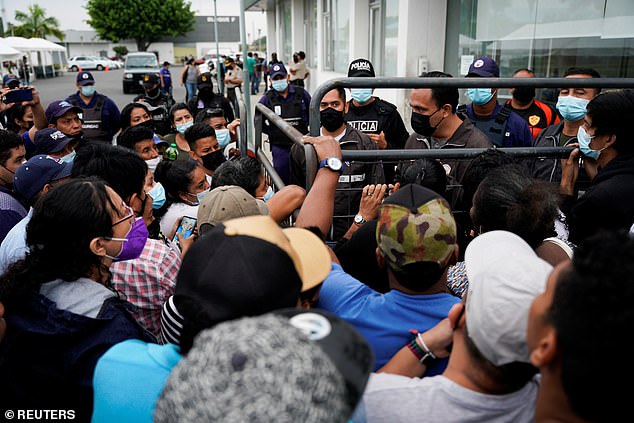 People gathered outside the police station after prisoners were killed

Just this September 119 inmates were killed in the Litoral prison- the country’s worst ever prison massacre.

Officials said at least five of the dead were beheaded. Last February, 79 inmates were killed in simultaneous riots in various prisons. So far this year, more than 300 prisoners have died in clashes in penitentiaries across Ecuador.

Outside the prison, relatives of inmates gathered for news of their loved ones.

‘Enough of this. When will they stop the killing? This is a prison not a slaughterhouse, they are human beings,’ said Francisca Chancay, whose brother has been in the prison for eight months.

Some called for Ecuador´s military to take control of the prisons.

‘What is Lasso waiting for? That there are more deaths?´´ said Maritza Vera, whose son is an inmate. ‘Have mercy, where are the human rights. We thought this was going to change, but it´s worse.’

Arosemena said authorities in Ecuador will deal with the prison overcrowding by granting pardons, relocating inmates and transferring some foreign inmates back to their homelands.

The Guayas governor also said Ecuador will receive international aid from countries like Colombia, the United States, Israel and Spain to deal with the crisis in its prisons. The aid will be in resources and logistics.

‘For example, installing a freight scanner in the Guayaquil Penitentiary to avoid the entry of arms costs $4 million,’ said Arosemena.

Vera said the situation is making the families of inmates desperate.

‘I feel sad and in anguish because there is too much death,’ Vera said.