Even their fans can’t hit the target! Hilarious moment angry Scotland supporter tries to kick a table and misses live on TV after Euro 2020 exit

A disappointed Scotland fan was caught on live TV trying and dramatically failing to take his anger out on a table after watching his team get knocked out of Euros 2020.

Manager Steve Clarke’s team needed a win from their final group game against Croatia in Glasgow last night to get through to the last 16 round.

But Scotland’s dreams of making it through to their first ever knock-out round were dashed in the 3-1 loss.

And one unlucky supporter even had their embarrassing reaction to the defeat broadcast live on TV.

The BBC has a camera trained on supporters watching the game in a fan zone, with many decked out in the nation’s blue and white colours.

But as Scotland lost their 1-1 draw through goals by Croatia’s Luka Modric and Ivan Perisic the high-stake game became too much for one.

Footage captures a fan stand up and look for a table to take his anger out on.

As he goes to kick it however he missteps and aggressively lands his foot on top of it before reeling from the awkward knock. 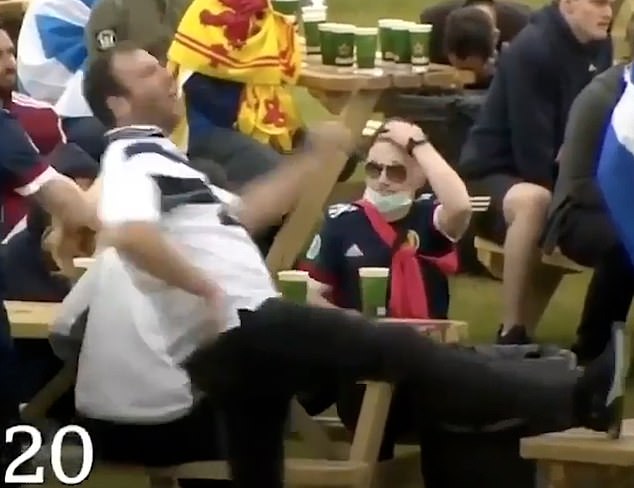 The man then walks sheepishly back to seat, although it appears no one in the fan zone had noticed.

But as well as being shown on the News At Ten, viewers on social media were quick to spot the fail and poke fun.

One commented: ‘As if his night wasn’t bad enough he’s gonna wake up famous tomorrow.’

Paul added: ‘If ever a video summed up Scottish football, and Scotland’s prowess in international tournaments, this is it.’

But James Taylor tried to make an excuse for the man, writing: ‘He didn’t miss, he was just doing stretches to allow him to boogie woogie.’

As well as being shown on the News At Ten, viewers on social media were quick to spot the fail and poke fun

Glen Turnbull added: ‘He’s unlucky not to make the squad with finishing like that.’

Scotland needed a win to progress to the next round but were quickly put on the back foot by Nikola Vlasic’s 17th-minute goal at the Hampden Park ground.

Callum McGregor however kept hopes alive with an equaliser just before half-time.

But it was a stunning Luka Modric shot followed by a header from Ivan Perisic that saw Croatia take a 3-1 victory. 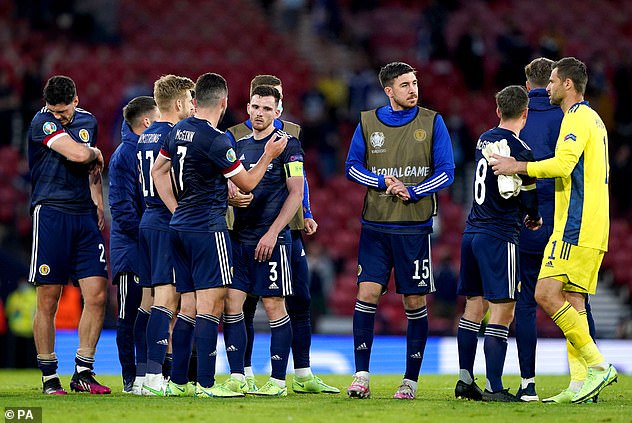 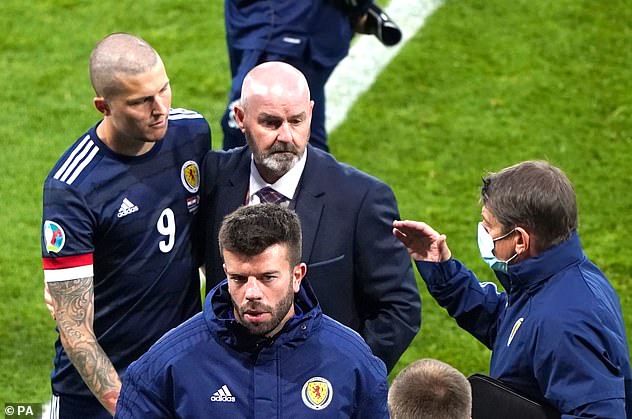 Steve Clarke (centre), the Scotland manager, said the team was ‘disappointed we are out’ and had wanted ‘to stay in as long as we could’

Croatia then took second place in Group D, behind England, while the Scots were left last behind the Czech Republic.

Steve Clarke, the Scotland manager, said the team was ‘disappointed we are out’ and had wanted ‘to stay in as long as we could’.

He added: ‘Disappointed we haven’t managed to get out of the group stage. You have to give me tonight to get over that, and then a few days.

‘We will all sit down and take stock and look at our performances.

‘I will look at my performance and the performance of the players and we will look at what we can do better in the future. And we’ll make sure it’s not 23 years before we go to the next tournament.’