More than four in 10 Delta Covid hospital patients in England may have been admitted for a different illness, official figures suggest

More than four in 10 patients hospitalised with the Delta variant in England may have been admitted for something else, MailOnline’s analysis of official data suggests.

Public Health England’s fortnightly update on coronavirus strains circulating around the country showed 7,285 people had spent at least one night in hospital with the mutant virus by August 15.

But it admitted as many as 3,154 (43 per cent) had likely come to A&E for ‘a diagnosis unrelated to Covid’ and tested positive later through routine swabbing.

The proportion of people testing positive for the strain after admission for a different illness has risen four per cent since then. By June 21, it was 39 per cent.

He told MailOnline: ‘If someone is asymptomatic and they’re admitted say, with an appendicitis or smashed ankle, then the hospital won’t know that they’re infected for about 24 hours, because that’s how long it takes to get the test done.

‘In that time they could easily have infected staff and other patients, some of whom will be especially vulnerable.’

Other scientists warned official figures were overestimating the number of Covid patients in hospital. But they did not rule out that an undiagnosed Covid infection may have flared up other underlying conditions.

However, it comes as the number of patients with Covid-19 in hospital in England has hit 6,000 for the first time in more than five months. The figure, which is a snapshot of patients as of 8am on August 23, is up 11 per cent on the previous week. 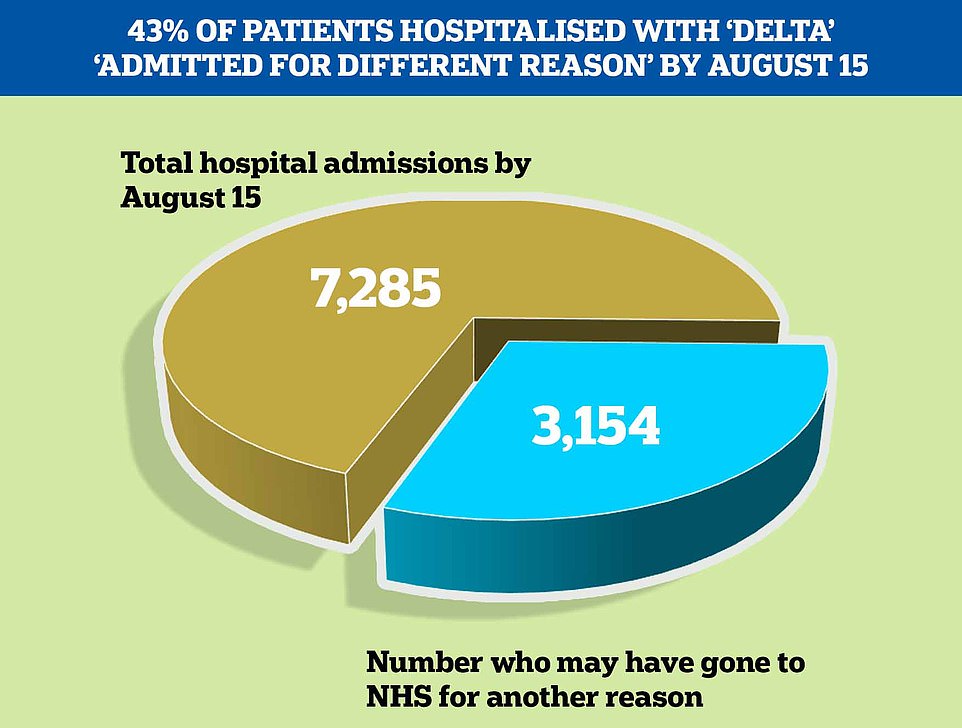 Public Health England’s fortnightly update on coronavirus strains circulating around the country showed 7,285 people had spent at least one night in hospital with the Delta variant of the virus by August 15. But it admitted as many as 3,154 (43 per cent) had likely come to A&E for ‘a diagnosis unrelated to Covid’ and tested positive later through routine swabbing 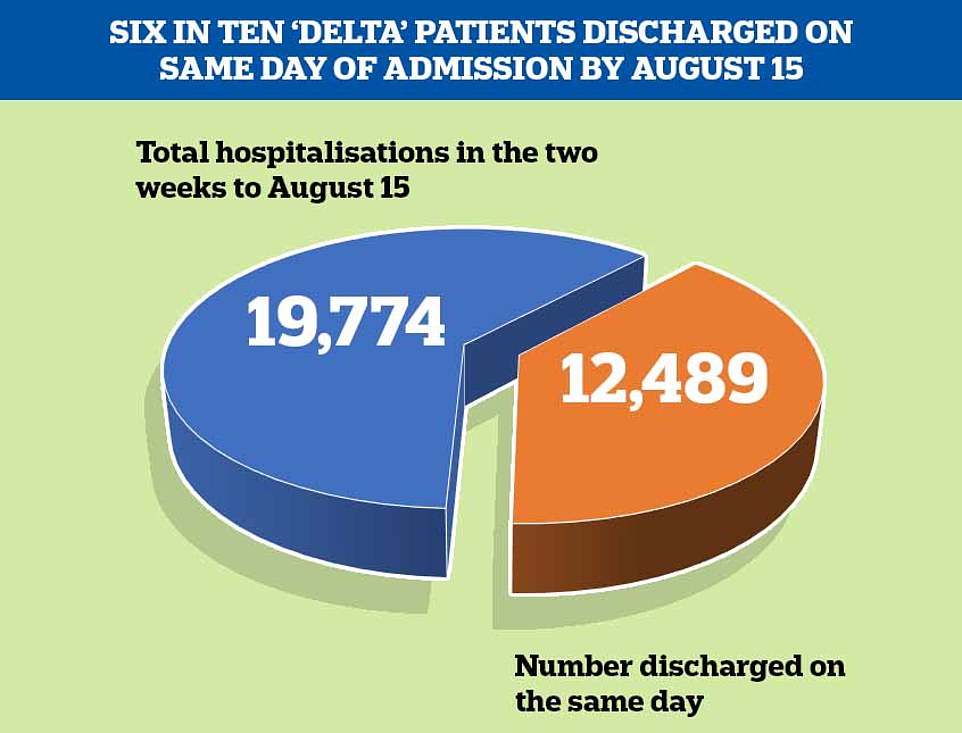 Separate figures in the PHE report show that six in ten patients who visited hospital were discharged on the same day of admission by August 15. Of the 19,774 people hospitalised by that date, 12,489 left on the same day they visited the hospital 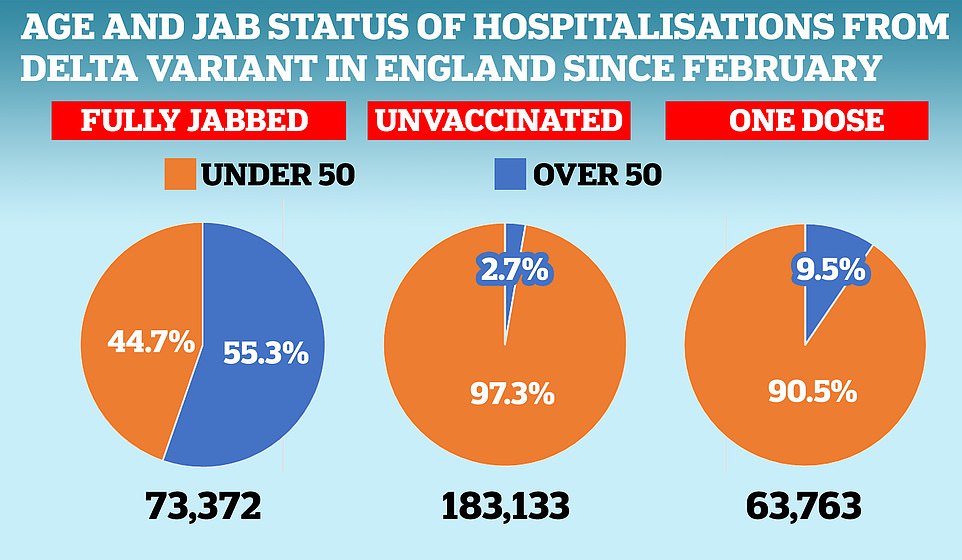 The reason under-50s make up a larger proportion of the cases among unvaccinated and one dose admissions is because they are more likely to not have had a jab. The data from Public Health England shows that most admissions are still in the unvaccinated (shown middle) of which people under-50 make up the vast majority of cases. The same is true about admissions among people who’ve had a single dose (right). However it is more balanced in people who have been fully vaccinated 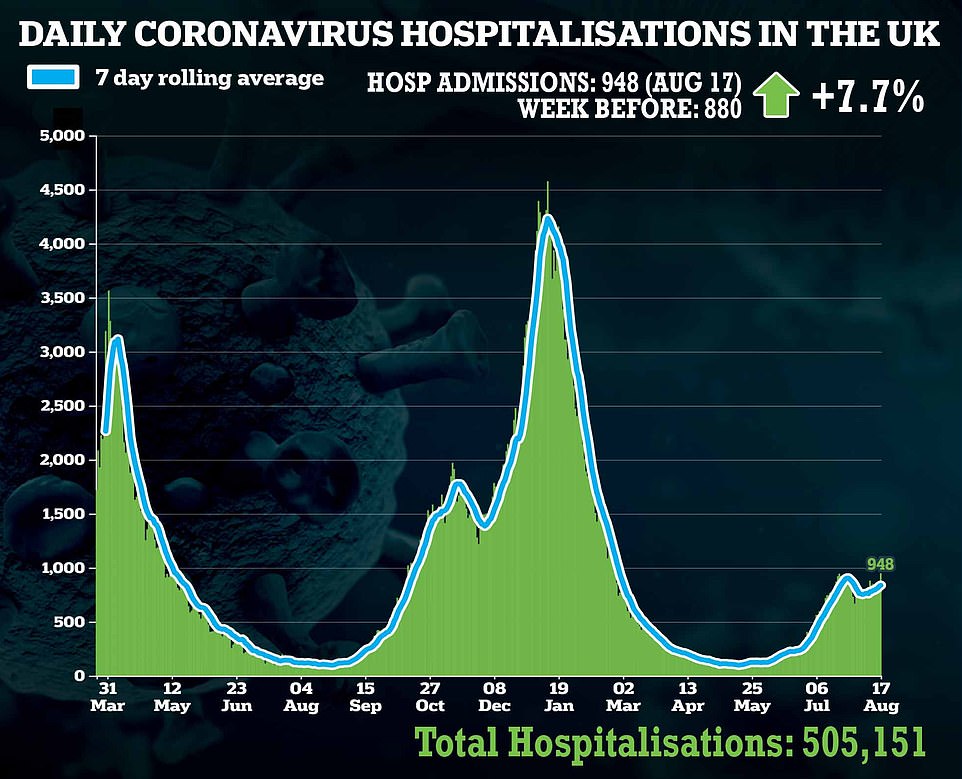 Separate figures from the report revealed six in ten Indian variant patients were sent home on the same day they visited hospital. These people are not tallied in the Government’s daily update.

It comes against the backdrop of rising case numbers, deaths and hospital admissions.

Latest hospital data revealed that 948 people were admitted with the virus on August 17, which was almost eight per cent higher than the week prior.

Dr Clarke added: ‘The number of infections in society is currently being allowed to run at a very high level, so it’s inevitable that a lot of people will take the virus into hospital unknowingly.

Covid became the ninth leading cause of death in England in July as the country ended all lockdown restrictions on Freedom Day, official figures revealed today.

The virus accounted for 969 out of the 40,467 fatalities from all causes last month (2.4 per cent), the equivalent of nearly one in 40, according to the Office for National Statistics.

It marks a significant rise from June, when Covid was England’s 26th biggest killer and made up 0.9 per cent of deaths – fewer than one in 100. 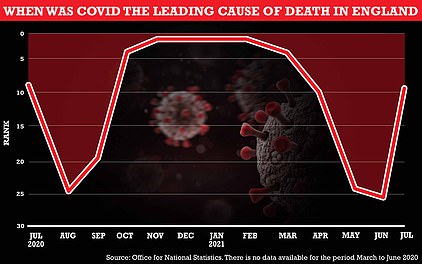 Covid was the leading cause of death in England at the end of 2019 and beginning of 2020, but it plummeted to 26th place in June. But it has now jumped 17 places to be the ninth biggest killer. In July, 969 of the 40,467 fatalities recorded in the country were caused by the virus, while a total of 1,161 people had Covid mentioned on their death certificate

But the proportion of deaths caused by the virus was still far lower last month than at other points in the pandemic thanks to the vaccines.

For comparison, Covid was accounting for 37 per cent of all deaths in England at the height of the second wave in January.

Dementia and Alzheimer’s was responsible for four times more deaths than Covid last month, while heart disease and lung cancer continue to round out the top three causes.

The 969 Covid deaths last month equate to an average of 31 deaths per day throughout the whole of July. However, this number has risen significantly since Freedom Day went ahead on July 19 and triggered a sustained uptick in cases and deaths. The UK as a whole is currently averaging 98 deaths per day.

‘The problem lies with the high number of community infections. It is not a reason to think that the numbers in hospital are not a problem or to point the finger at hospital infection control.

PHE publishes a technical briefing every two weeks, in which it details how many patients infected with each Covid variant have been hospitalised since February.

The vast majority of cases are down to the Indian variant, because the strain is behind almost every single infection across the country.

Broken down, PHE’s update showed there were 7,285 hospital admissions from the Delta variant which resulted in an overnight stay by August 15.

It said 4,131 of these cases tested positive sometime before arriving. The remainder tested positive on the same day as their admission, suggesting they were only picked up due to routine testing at hospitals.

Cambridge University epidemiologist Dr Raghib Ali told MailOnline that the figures ‘do indicate a significant proportion of those admitted to hospital are not there because they have primarily got a Covid admission.’

He added, however: ‘But it is slightly more complicated than that because Covid can complicate other conditions so increase the risk of a heart attack for example.

‘Someone could come in with a chest pain and have a heart attack and be Covid positive, and it could be that that Covid infection precipitated their heart attack.’

He called on ministers to publish Covid hospitalisation figures that have been broken down into three categories — Covid pneumonia patients, cases in which Covid has contributed to their hospitalisation, and patients where the disease was an ‘incidental’ finding.

He said no decisions on any future restrictions in the UK should be made until these three categories of data are published.

The PHE findings are in line with leaked NHS England data last month, which found more than half of people labelled as a Covid hospital patient in England only tested positive after being admitted for a different reason.

It suggests the pressure of the third wave on hospitals may be even less severe than the daily numbers let on.

However,  it comes as the number of patients with Covid in hospital in England hits a five-month high.

Patient levels have not been above 6,000 since March 14 – when the total stood at 6,039, according to data published by NHS England.

Hospital numbers have been rising slowly for the last few months as a result of the third wave of coronavirus, which began in England in late May.

The increase had appeared to level off at the end of July and showed signs of a small drop, but numbers have started climbing again in recent weeks.

The figures reflect a similar-shaped trend in the number of new cases of coronavirus, which spiked sharply in England in mid-July, began to fall, then levelled off and started to rise once more.

Trends in the number of new Covid cases typically take a short while to show up in the hospital data, due to the length of time between someone testing positive for coronavirus and then becoming ill enough to require hospital care.

The latest figures also show that all regions are recording a week-on-week rise in patients, with the biggest percentage increases in south-east England (up 19 per cent to 590), the Midlands (up 14 per cent to 1,209, the highest number for any region) and north-west England (up 12 per cent to 937).

Patient numbers are still well below levels seen at the peak of the second wave, however. A total of 34,336 Covid-19 patients were in hospital in England on January 18, the highest at any point since the pandemic began.

The current total of 6,000 is roughly one-sixth of this peak. Meanwhile, the number of daily hospital admissions of patients with Covid-19 stood at 757 on August 21.

The seven-day average for daily admissions is currently 777: the highest level since July 28.