The Melbourne couple who travelled from Victoria to Queensland before testing positive for coronavirus might have had a permit to leave the state but close to 50 other people have been fined for “blatant” breaches of travel restrictions during the lockdown.

The travellers have sparked a multi-state investigation into their route after they left Melton on June 1 and travelled via NSW before testing positive for the virus in Queensland this week. 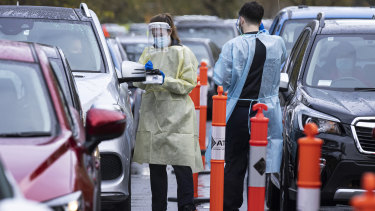 Chief Commissioner Shane Patton said while Melbourne was subject to lockdown restrictions at the time, initial investigations indicated the pair may have been travelling out of Victoria legitimately.

“It is a matter the Department of Health is looking into and we’re working with them and with Queensland Police, but it’s very early to make assumptions as to what has happened. What I’ve been broadly advised is that there’s a possibility in fact [the woman] was moving house and legitimately was able to go to Queensland,” Mr Patton told ABC Radio Melbourne.

“Whether she was aware of being positive for COVID before she left or not is still being determined.

“The message is, let’s not make any assumptions and let’s let the Department of Health work through whether or not this may have been an unfortunate series of events.” 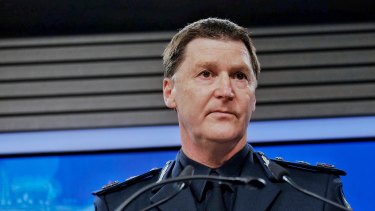 Government officials from Queensland, NSW and Victoria planned to meet on Thursday as part of the investigation into the Victorian couple’s movements and discover whether or not they had a legitimate reason to travel.

Their source of their infection is yet to be confirmed but Victorian authorities will conduct a contact tracing interview on Thursday.

Acting Premier James Merlino said on Thursday morning that if the couple had travelled out of the state to move house, it would not warrant a breach under the state’s current coronavirus restrictions.

“It’s important to note that if they were relocating, that is not a breach of directions here in Victoria, but we just don’t know so we will have those discussions with those individuals today. But obviously this is all concerning information,” Mr Merlino said.

“It’s really important that we interview this couple.”

Queensland Health Minister Yvette D’Ath said she understood the Victorian man had a new job in Queensland, which was a legitimate reason to travel, but she would wait for more information before casting judgment.

“I don’t want to jump to conclusions before we have all the facts, specifically if they had a travel declaration,” she said.

Victoria’s COVID-19 response commander Jeroen Weimar said the case highlighted the importance of QR check-ins. Investigators were, he said, able to track the pair’s movements within Victoria, NSW and Queensland within a matter of hours. 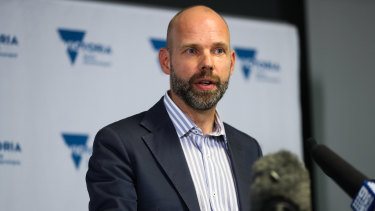 He said of particular interest to the Health Department was the fact the couple had been to the Craigieburn shopping centre on May 23 where nine positive coronavirus cases have been traced to.

Deputy Chief Health Officer Allen Cheng said the couple became symptomatic on June 3, meaning they were infectious from about the time they left home.

Early investigations have found the 44-year-old woman and her husband left Melton on June 1 before driving through NSW and north into Queensland, on June 5, and then onto the Sunshine Coast where the pair tested positive this week.

Queensland Chief Health Officer Jeannette Young said 17 primary close contacts had since been identified but testing had found the couple were likely in the late stages of their illness when travelling through the two states.

She said three of their close contacts had since tested negative including the parents of one of the pair, who they stayed with during their travels. 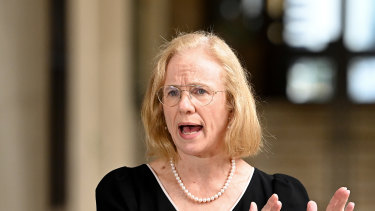 Queensland’s Chief Health Officer Jeannette Young said the couple were believed to be at the end of their infectious period. Credit:Getty Image

NSW Health Minister Brad Hazzard said the pair travelled through Gillenbah, Forbes, Dubbo and Moree along the way which presented a serious risk to the state.

It comes as New Zealand places three Melburnians into quarantine after the group drove from Melbourne to Sydney before boarding a flight to Auckland last week.

Earlier this week New Zealand’s director general of health Ashley Bloomfield said while the two countries have a travel bubble in place, travel from Victoria has been paused while the state tackles its latest coronavirus outbreak. 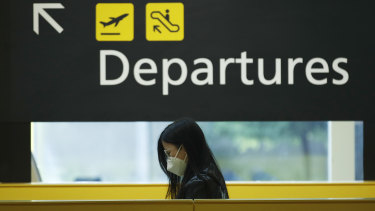 The three, who had all returned negative tests, will remain in a quarantine facility for 14 days.

In Victoria, Mr Patton said “50-odd” people had been fined during the state’s latest circuit-breaker lockdown for blatant or deliberate examples of travelling outside of their restriction zones.

“We’ve checked nearly 6000 vehicles in the last couple of weeks. Out of that we’ve given out 50-odd tickets and a couple of hundred warnings,” Mr Patton said.

“The sheriff will be chasing them up for their fines but they’re a costly fine. It’s $4500-odd so that’s a really big hit. And we’ll be continuing on with that.”