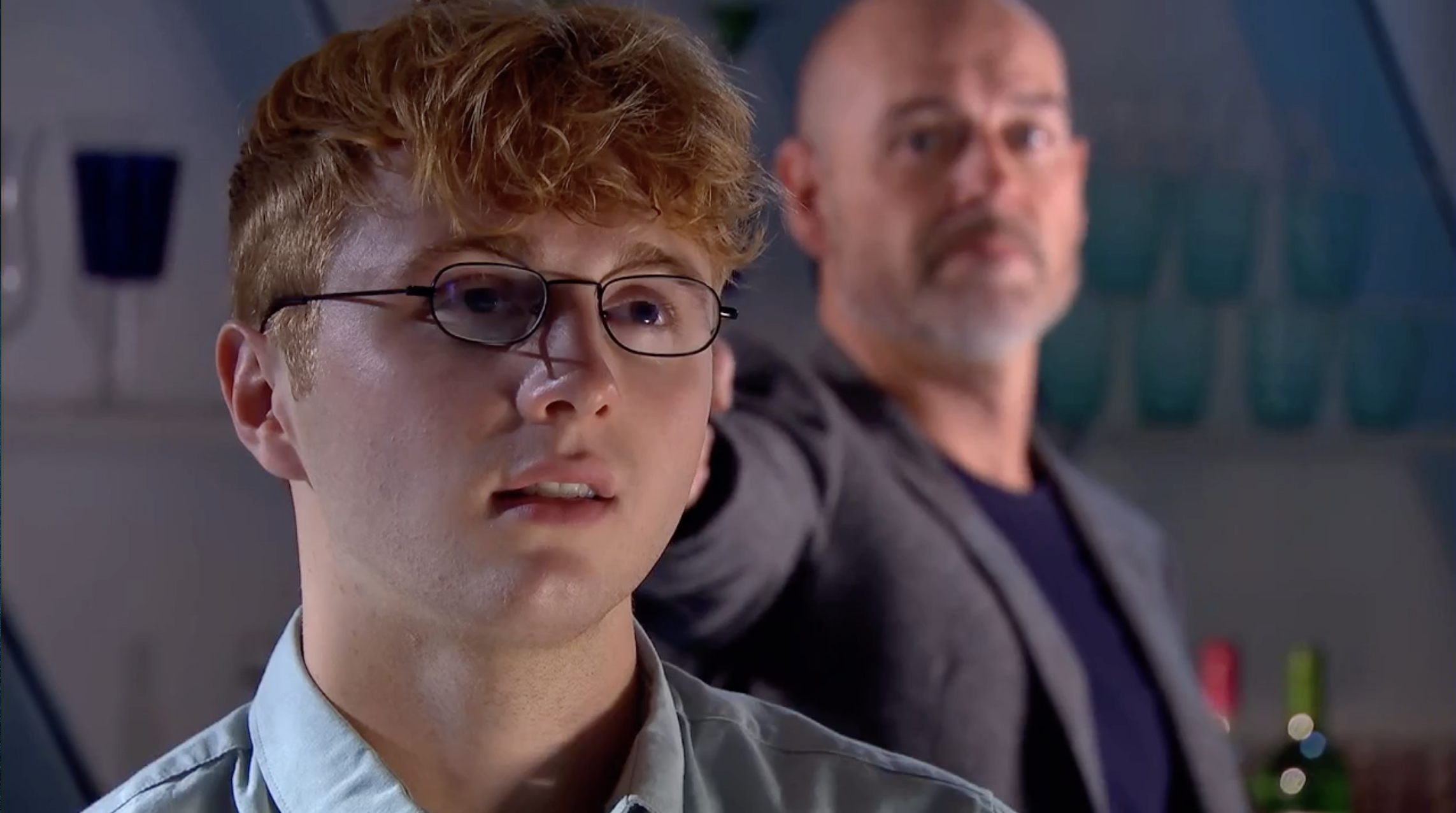 The IT wizard hoped his boss and mentor would hide him after he was exposed as Peri Lomax’s (Ruby O’Donnell) stalker, and for a moment it appeared as if Fergus was going to do just that.

But the property tycoon ultimately reached for Warren Fox’s (Jamie Lomas) gun and proceeded to shoot the computer whizkid, thus metaphorically killing two birds with one stone, as he covering up the mess Timmy made, securing Warren’s loyalty in the process.

But how did we get here?

Well, Tuesday’s (October 12) E4 First-Look edition of the Channel 4 soap picked up directly from where the previous outing left off, as a terrified Peri reeled in the wake of discovering that Timmy had been stalking her.

Trapped alone with him in her home, Peri quizzed Timmy on why he had her lipstick in his possession, prompting him to reveal that he broke in to obtain it, after witnessing her putting it on via the hidden camera in her house.

Peri was rendered speechless upon discovering that Timmy had been watching her and Juliet Nightingale (Niamh Blackshaw) in their bedroom, but before she had a chance to process what she’d heard, Juliet broke in – determined to rescue her girlfriend.

‘Get away from her you freak!’, she yelled at Timmy, riling him up.

Peri explained the situation, and thus Juliet branded Timmy a ‘pervert’. Timmy, however, berated Jules for interfering, yelling at her that she simply could not love Peri as much as he does.

Before long, he found himself bound to a chair, after Peri whacked him over the head with a large book, knocking him unconscious.

Timmy woke moments later, and pleaded to be set free. Juliet, however, had other ideas, as she wrote ‘PERV’ on his forehead with the lipstick he loved so much, before proceeding to record him as punishment.

She even had a little script for him, demanding that he read out: ‘My name’s Timmy and I’m a pervert.’

Peri apologised to Juliet for doubting her, but Jules was more focused on revenge. Timmy, meanwhile, managed to escape captivity, before making his way to The Loft, where he pleaded with Fergus to help.

Fergus was not pleased that Timmy – who he thought of as his confidante – had betrayed him in such a fashion, but Timmy reiterated that he meant him no harm.

‘I just wanted to look at [Peri],’ he added, leaving Fergus feeling sorry for him. The businessman offered Timmy the opportunity to replace Warren on the drugs job next week.

Warren had dropped out after reuniting with Maxine Minniver (Nikki Sanderson), much to Fergus’ dismay. Timmy, while eager to please, was evidently nervous – something which Fergus picked up on.

He offered to fix Timmy a drink, before adopting a more sympathetic tone, telling him not to worry, and to just think about Peri.

Fergus then took hold of Warren’s gun, and his intentions were evident.

‘It’s okay,’ he told unsuspecting Timmy, before pointing the gun at the back of his head. ‘I’ve got your back.’

And with that he pulled the trigger, killing Timmy instantly, bringing to an end yet another compelling chapter in Hollyoaks’ history.

It was certainly an intense storyline, helmed by an utterly incredible performance from Sam Tutty, who was arguably never better than he was in his swan song outing. Hollyoaks will miss him and, quite frankly, so will we.

But as one chapter ends, another begins, as Fergus quite spectacularly has Warren yet again right where he wants him. Will the duo work together to dispose of Timmy’s body? And what’s next for their partnership?

Both interesting questions, which we’re going to leave you to think about ahead of the next episode.