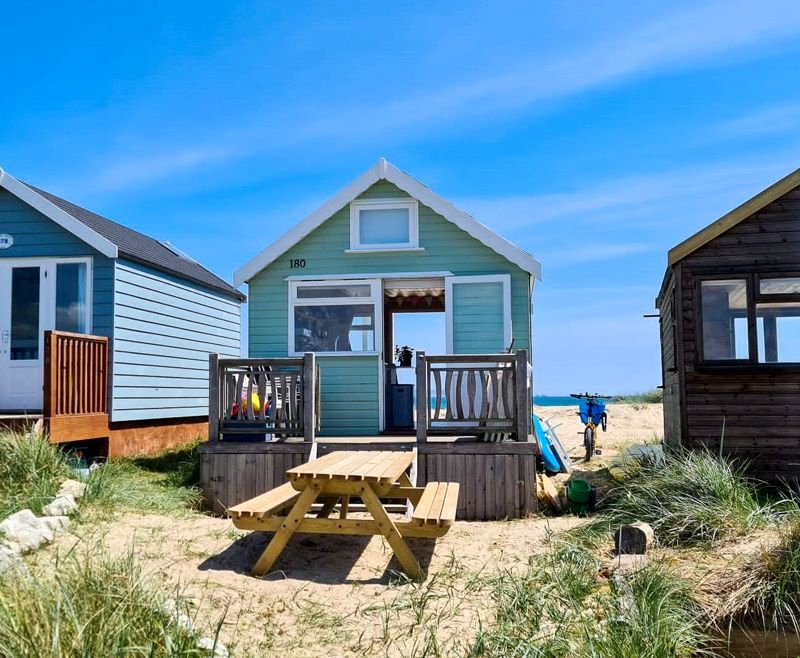 Beach hut fever has officially become out of control, with a new kid on the block taking the ‘most expensive’ title.

Those on the picturesque Mudeford sandbank in Christchurch Harbour, Dorset, have seen a particular price spike, with huts going for £350,000 and £330,000 just a year ago.

Another cabin on the remote beach has now knocked them out of the park, though, on the market for a whopping £575,000.

The 13ft by 10ft timber cabin that has no mains electricity, toilet, or washing facilities, but is commanding such a large price due to its sought-after location.

Hut 180, that can sleep six people between April to October, is now valued as the same as a luxurious, six bedroom house in Northumberland. And, as it is not possible to take out a mortgage on it, the wooden bolthole will be sold to a cash buyer.

The hut is in an ‘outstanding location’ and has sea views looking out to the Isle of Wight from the front and Christchurch Harbour to the back.

The ‘high spec’ layout inside includes a fitted kitchen which has an integrated fridge freezer and a water heater run via solar panels on the roof and an oven power by a gas bottle.

The seating area can be converted into two double beds, and there’s a set of steps leading to a mezzanine level where two more people can sleep.

There is no toilet or shower, with washing facilities in a communal shower block next door to it.

Cars are not allowed at Mudeford and the only way of getting there is via a 20-minute-walk, a ride on a novelty land train or a short ferry trip across the harbour.

But its remote and exclusive location appears to be what makes it so desirable among rich people wanting a holiday home.

There are about 360 huts on the Mudeford sandbank, and the prices for them have increased over the past 20 years due to demand far outstripping supply.

Andy Denison, of estate agents Denisons, described the cabin as one of the ‘finest located huts’ at Mudeford.

He said: ‘The property enjoys an elevated position with glorious uninterrupted front and rear views of the beach and harbour.

‘This truly high spec hut has recently undergone major improvements. The home comfortably sleeps six with two doubles on the ground floor and a double on the mezzanine.

‘We have had a few big surprises recently. There have been huts that have sold for well and above their asking prices. There are people who want that way of life and they can afford to have it.’

The new owners will also have to stump up about £4,500 a year to the local council in fees.