Home » TV and Movies » ‘The Mysterious Benedict Society’ Review: A Charming Mix of the Whimsical and Weird

Disney appears to love two things at the moment: Marvel and Tony Hale. And while both are fun in their own right, the work the studio has been doing with Hale has created some adorable and downright weird programming aimed at children, starting with the creation of Forky in “Toy Story 4” and the Emmy Award-winning spin-off short series, “Forky Asks a Question.”

“The Mysterious Benedict Society,” based on Trenton Lee Stewart’s book, is another entry in Disney’s collaboration with Hale that is equal parts charming, wacky, weird, and whimsical. Series creators Phil Hay and Matt Manfredi skillfully create a world engaging enough for children but with enough added mystery and complexity to ensnare adults (or Disney’s patented brand of childless millennials.)

We’re first introduced to young Reynie Muldoon (Mystic Inscho), an orphan who, like everyone else in the city, lives in a constant state of fear and anxiety because a presumed emergency that is going to happen. He tells his tutor, Ms. Perumal (Gia Sandhu) that he doesn’t know what he’s afraid of, just that he’s always afraid. In the hopes of breaking him out of his shell, Ms. Perumal alerts him to an ad in a newspaper seeking genius children. Those selected get to attend a plush private school.

The series’ quirkiness feels like a close cousin to the “Series of Unfortunate Events” series of books from the minute Reynie sits down to take the test and Kristen Schaal’s character, Number Two, tells the children anyone who fails will be “executed.” Manfredi and Hay aren’t afraid to create a series that both praises the intelligence of children while also admitting that being a kid is weird and confusing.

Within the first two episode it’s hard to necessarily discern what the plot of the show is or what “The Emergency” is, but that’s to the series’ benefit. With everything happening in 2020, hearing Reynie say he lives in a perpetual state of fear and anxiety that something bad will happen is a mood we can all understand, but the series acknowledges that we don’t often allow children to sit in those feelings. On top of that, Reynie’s genius, along with that of the other kids, is always positioned as something to praise, not fear.

Once Reynie is accepted into whatever program Mr. Benedict (Tony Hale) is seeking kids for, the show’s true quirks are unleashed. Inscho, at such a young age, is a great straight man. He’s smart but not necessarily a leader in the grand tradition — when he’s paired opposite the other genius orphans, he comes alive and finds leadership in his own way. Seth Carr and Emmy DeOliveira as George “Sticky” Washington and Kate Wetherall, respectively, are similarly solid. Where the characters are still forming, Carr and DeOliveria let you know all you’re required to know without the script bemoaning the point. 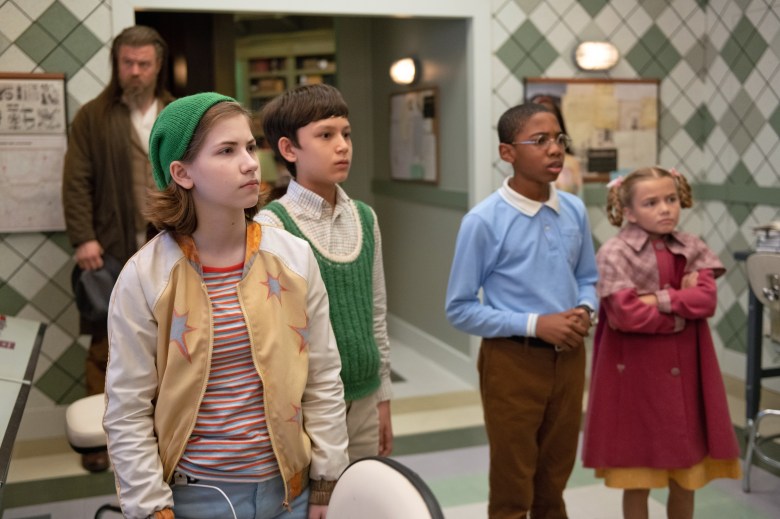 Then there’s tiny Marta Kessler as Constance Contraire. If her name doesn’t already tell you that she’s the perfect character for her own spin-off, Kessler’s acting will. Don’t be fooled by her tiny stature, cape wearing skills, and hooped pigtails, she’s a pint-sized version of every ’80s action star who sits in the corner and mocks the other characters. Kessler is utterly hilarious and steals several scenes.

But because the foundation of the series is still forming within the first half, it’s up to the adults to propel the plot forward and, thankfully, everyone is on their A-game. Hale, especially, is great in a dual role. The audience spends the first two episodes with him as Mr. Benedict and he’s a fantastic combination of Doc Brown from “Back to the Future” and every loving dad from television and film.

Hale gets to engage in some wacky perks, like Mr. Benedict being a narcoleptic who passes out when he experiences extreme emotion. Really, his scenes allow for the series to let out some fun sight gags, like his attempt to give Reynie a biscuit, which he then offers to Number Two who pulls out an entire tray of her own.

The world-building takes its time, and with episodes clocking in between 45-60 minutes, there’s a lot of moments that could be perceived as filler. But, really, these are just opportunities to allow the cast to let loose and show these characters for the bizarre people they are. Case in point: Ryan Hurst’s Milligan, Mr. Benedict’s muscle. Hurst is probably best known for more serious turns in the likes of “Sons of Anarchy” but he’s so perfect in this, whether that’s dressing up in lederhosen or recounting a story about losing his memory that involves torture and a “husky mouse.”

With so many colorful characters it’d be easy for a show like “The Mysterious Benedict Society” to lose the plot completely, and that’s a valid fear with the episodes being so lengthy. However, if Manfredi and Hay can maintain the characterization and continue to tackle The Emergency as more of a feeling than a physical thing, it could become the most entertaining kids show you’ll watch.

“The Mysterious Benedict Society” is now streaming on Disney+.