With “The Private Dining Room of the Police Commissioner,” Wes Anderson arguably saved the best episode for last in his nostalgic ode to journalism: “The French Dispatch.” It’s whimsical, absurd, and bittersweet, overflowing with visual delights (including a 2D-animated chase sequence), and crafted like a culinary masterpiece.

Like all of “The French Dispatch,” “The Private Dining Room” was shot in the southwest town of Angoulême with its unique vertical stacking of spaces and twisting and turning alleys. Stockhausen even found a derelict felt factory that they converted into a miniature studio. Anderson’s love of stop-motion animation (“Isle of Dogs,” “Fantastic Mr. Fox”) showed its presence through the use of animatics for both set creation and shot framing (multiple aspect ratios were also employed throughout). 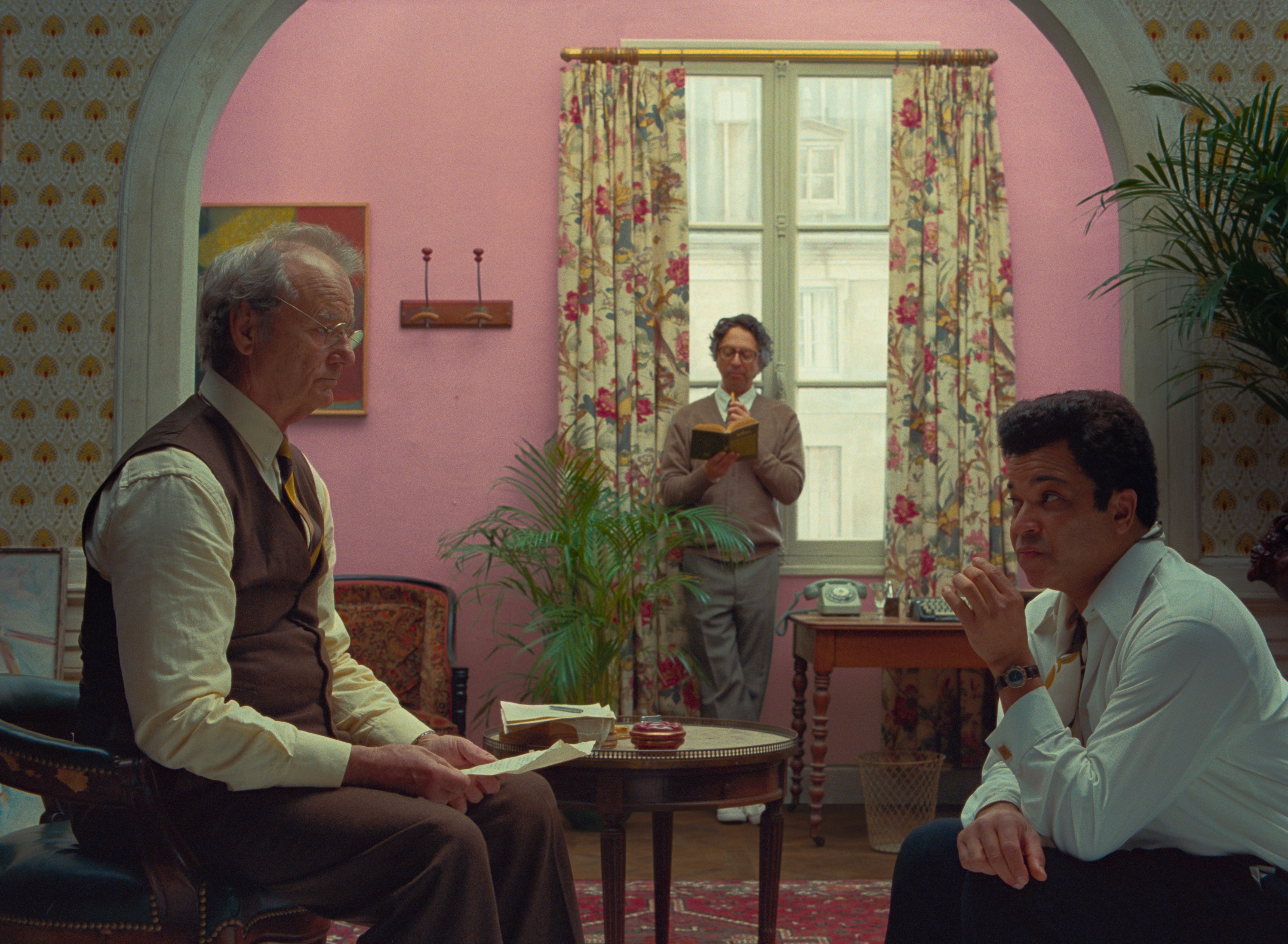 While it’s no surprise that Yeoman shot on 35mm Kodak film (with ARRICAM ST and LT cameras, fitted with Cooke S4 prime lenses), he leaned a lot more into black-and-white when Anderson became enraptured by the grain and texture. However, color vibrantly peeks through in “The Private Dining Room” when showing off showgirl Saoirse Ronan’s radiant blue eyes and elsewhere for emphasis. The overall vibe of the episode, though, is fittingly French New Wave.

“For me, ‘The Private Dining Room’ had more nuts and bolts research,” said Oscar winner Stockhausen (“The Grand Budapest Hotel”), who studied French police stations and commercial scale kitchens from the ’50s. “The anchor part of that story is the way Wes introduces the police station. At first, it was going to be individual sets for each of the rooms, but we built the whole thing from scratch on the biggest set that we had, wall to wall, in the old felt factory. And Jeffrey made his way through the whole police station in one shot,” Stockhausen continued. “We started in the corridor, went into the investigative maps survey room, then to a gym, through the disguise room, through the firing range, and landing in the chicken coop holding cell area.”

For the dining room/kitchen, the art department used an upstairs split level room of the felt factory, in which the upper level became the kitchen with a large window so the entire space could be viewed in the same shot. “Then we made a miniature of the courtyard to put right outside the window as a backing for it,” Stockhausen said. “And we made interesting use of the tile floor [interlocking diamond-shaped patterns], which was damaged but gave a nice sense of character to the dining room.” 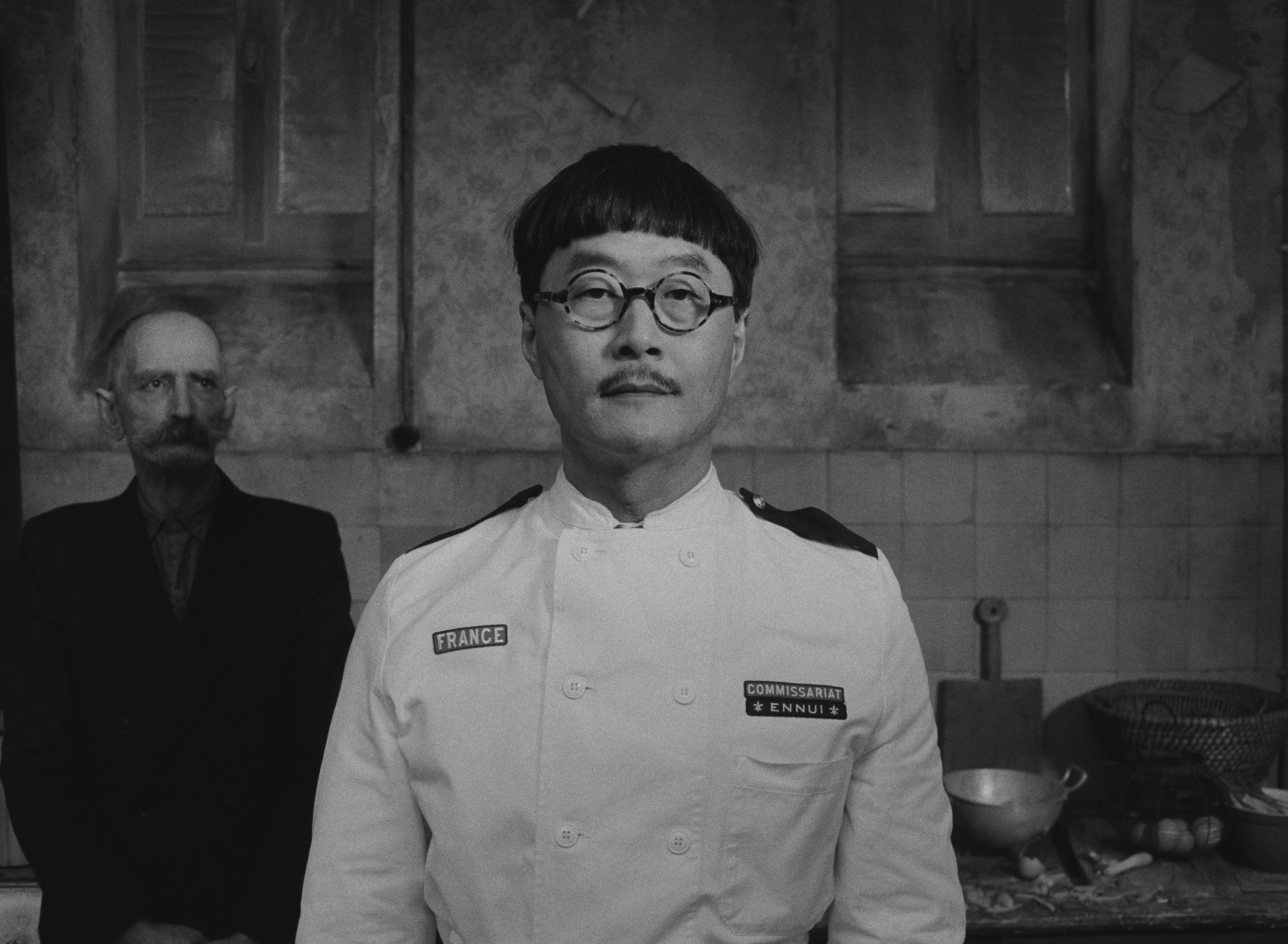 “We wanted the dining room to be a little spooky in a way,” added Yeoman. “I put overhead light on them so you couldn’t see their eyes and we kept the light off the walls. It was pretty dark in there. Then, when they had the potent, that’s when we circled around them on a track, and we wanted that to be a little more magical, so we brought the lights up on the walls and we shot it in color to show this whole different world that they were entering.”

The kidnapper’s lair, which also gets introduced in a single tracking shot in the interior stages, became a rogue’s gallery of villainy. “We had interesting garrets, and attics, but, as we were scouting, we found ideas from various places [to fill in more details],” added Stockhausen. “I think it was fascinating that it became this rambling shape with all these layers to it.” Added Yeoman: ” We wanted it to feel seedy but at the same time see everything.”

For the three-minute animated chase sequence, in which Wright and the police pursue the kidnappers, animation director Gwenn Germain was encouraged by Anderson to jump inside a Franco-Belgian comic book in both color and black-and-white (inspired by “Blake & Mortimer” and “Tintin”). “Wes likes minimalism in animated scenes, so the action is usually simple and straightforward,” said Germain (who did 2D animation on “Isle of Dogs”).

“On ‘The French Dispatch,’ sets, characters, and costumes did exist. One part of our mission therefore was to transpose them into a hand-drawn dimension. Like a translator, we had to seize and extract the core of their aesthetics. I think this sequence is a way to talk about a gloomy topic without being too gloomy. With the 2D animation, you take off the dramatic part and have something more poetic.” 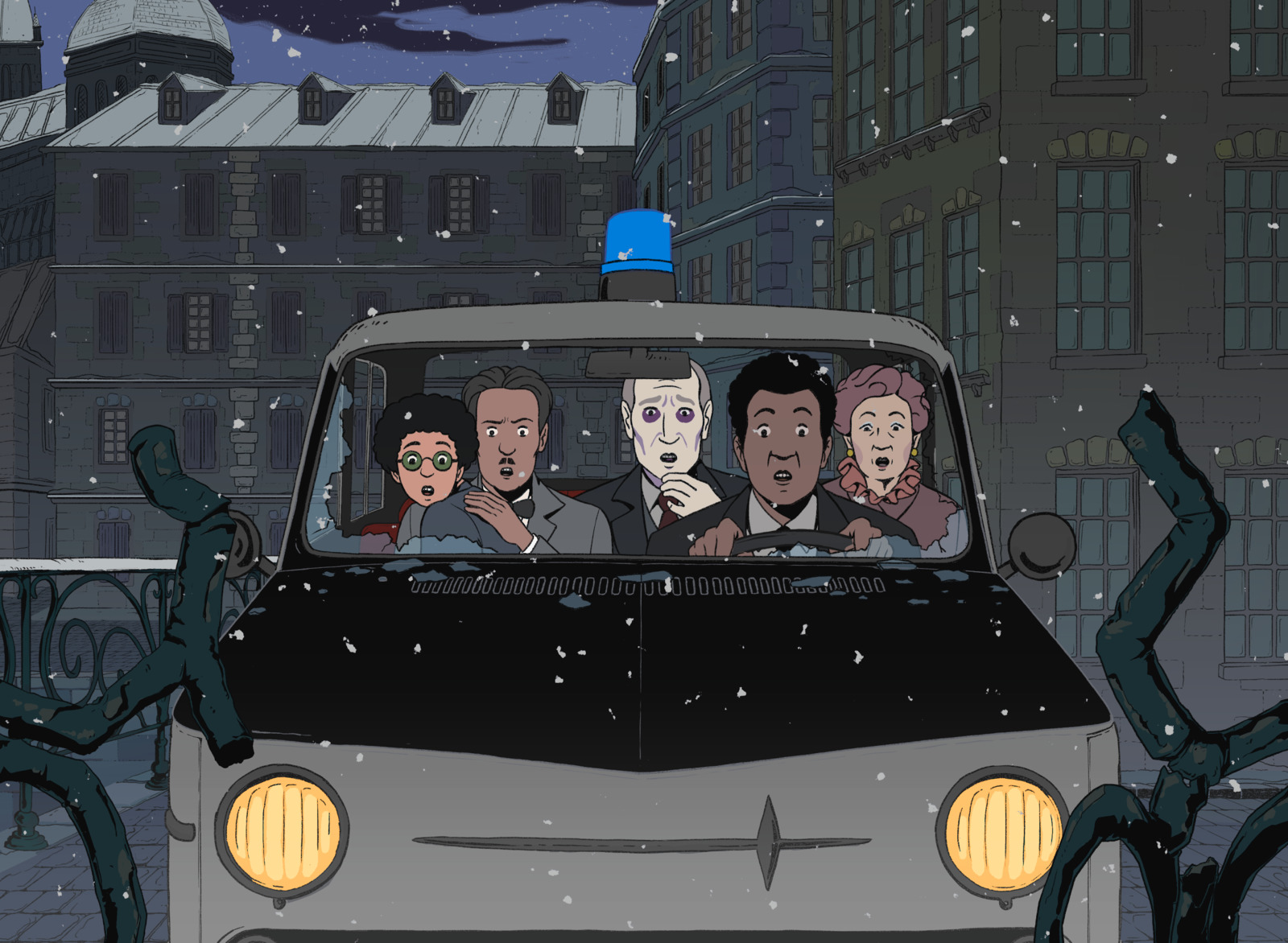 Finally, composer Desplat embraced the absurdity of Dada in his score and was especially jazzy for “The Private Dining Room.” “The great thing about Wes’ movies is they seem mischievous and absurd, but there’s deep meaning,” he said. “And I think Wes renders this ex-patriot story very well of Afro-Americans feeling at home in France and escaping racism in the ’50s and ’60s.”

Desplat described the episode’s main theme as a repetitive pattern on two chords, which introduces various instruments to provide different flavors, like a chef. “So, at times, you will have a Benny Goodman style coming in with the clarinet, and there’s a celesta, and there’s the tuba, and the piano plays the ragtime-ish pattern, and then the glockenspiel,” he added. “But it’s the instrumentation that makes it lively because the chords don’t change, they don’t evolve.”

The animated chase music is the most Dadaesque, highlighted by guitar, drums, and acoustic bass. And the last piece slows down almost like a dream. “It takes me back to the early ’50s in Paris, where there were a lot of bands that played New Orleans music,” Desplat said. “It’s a strange combination, pieces of dixieland come and go, and pieces of ragtime come and go. It’s very nostalgic but not sentimental.”