So close, yet so far.

In the season finale of Survivor 41, Deshawn Radden thought he had the game in the bag until the jury’s stern questioning and pointed tones took the wind entirely out of his sails. After everything was said and done, Radden missed the big win by four votes, losing out to winner Erika Casupanan 7-1. (Click here for a full recap, and read our Q&A with Erika here.)

Below, Radden talks to TVLine about his overconfidence heading into the final Tribal, the roller coaster ride that was the Do or Die twist and which other player he hasn’t quite made amends with yet.

TVLINE | You didn’t seem too confident heading into that fire-making challenge against Heather, but walk me through what was going on in your head as you were fighting for your life in the game.
I definitely wasn’t confident! If you think back to Episode 2 where you saw me trying to light the fire, I struggled a lot with it on the island. Going into the fire-making challenge, you don’t want to struggle with something that important, so I felt a lot of weight going into it. As I was practicing, my flame would just not get any taller than, like, five inches off the ground. I was like, “Wow, I came this far, and I’m about to lose.” I was catastrophizing, as I tend to do. But when I was in the moment, I was just like, “Don’t quit, just keep going,” and I’m glad I had that mantra and that mindset because it took me through. 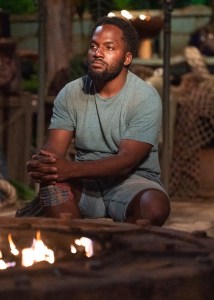 TVLINE | What were your thoughts on Xander choosing to keep Erika safe?
Yeah, I was a bit flabbergasted, I’m not gonna lie. Xander played a great game, but that move was maybe his Woo move, a little bit. She’s a player who had two immunities, she smashed the hourglass, she’s pretty strategic… you take Heather just to be safe, right? I told him that on the island, and I think Heather did as well, but he had his own reasons. We didn’t win Final 4 immunity, so you have to just roll with the punches, but I personally would not have brought Erika if I was Xander.

TVLINE | Going into that final Tribal, how confident were you?
Going into it, I thought my odds were super high, which is kind of laughable when we look at the outcome. Before it started, I thought I had a pretty good shot at winning. I think that can kind of explain my lack of awareness of what the jury was looking for because I genuinely thought I had a good shot to win. It wasn’t until they started asking the questions, and [I heard] the tone in which they were asking them when I realized I stand no shot. It was a rough realization to come to, but going into it, I was excited and ready to win my prize.

TVLINE | Were you surprised that Xander didn’t receive any votes, and why do you think he fell so short?
I’m a little shocked at the vote breakdown in general. Across the board, Erika should’ve won, but I think the breakdown could’ve been a little bit different. But when you look at how Evvie and Tiffany fell out with Xander, they were his two main locks, and so if you fall out with them, you have no other people in the jury to go to bat for you. On my end, I didn’t have anybody but Danny, and I know he tried in the jury, but there’s only so much you can do. We left on good terms, he voted for me, but on the flip side, I don’t think Evvie and Tiffany left on good terms with Xander, and they were supposed to be his two guaranteed votes. I’m kind of shocked at the 7-1 vote, but I’m also not. I think Erika had the biggest rally in the jury, and she deserved it, so good for her.

TVLINE | Let’s say Erika isn’t in the Final 3, and it’s yourself, Xander and Heather instead. What do you think happens in that scenario?
You know, man, that’s a good question! I would like to think I would’ve won, but I thought I was going to win this Final 3 [Laughs]. Looking back on what I know from the edit, honestly, I think maybe I could’ve pulled it out? I think it definitely would’ve been a plurality vote, where multiple people would’ve gotten votes. I don’t know! I’m just going to tell myself I think I could’ve won. 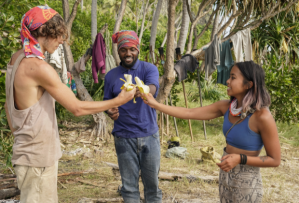 TVLINE | You were the unlucky recipient of the Do or Die twist. Unpack that for me. Were you thinking you were totally screwed?
When I first fell out of the challenge, I was like, “Oh, this sucks! How’d I get this luck?” But then, after I thought about it more, and I realized: 1) You’re on the chopping block anyway. You’re probably going to go home, and 2) I was so petty and immature, but I was thinking, “If I do go home off of this twist, you can never say you voted me out because I went out on a twist.” I was at such peace during the pre-Tribal scramble. Either way this goes, either you can’t take the shot, or… you can’t take the shot. Either I’m staying or I’m going, but you didn’t do anything to get me out of the game. I also felt really confident to pitch my case that Ricard needed to go. I was making big swings at that pre-Tribal scramble. It didn’t work out, but I felt confident and at peace with the situation.

TVLINE | When Probst flipped that box open and you saw the flame, you must’ve felt like… a million dollars, maybe?
Heck yeah! I lost my s–t, dude. I felt like I’d died and gone to heaven. Like, wow. I got a new life in the game. I felt amazing.

TVLINE | After you taped the After Show and was finally reunited with everyone, what was the vibe like? Any bad blood or conflict?
What’s so funny… I was mad, I’m not going to lie. I went back to Ponderosa, got the biggest burger on the menu and took it to my room and fell asleep after I ate — well, I took a shower too, because that would be gross. [Laughs] I just didn’t understand because I was coming into it with the mindset where I thought I had it in the bag. It wasn’t until I watched it back where I realized how the game fell apart for me. But at Ponderosa, I didn’t really talk to many people that night. The next morning, before we left, I hashed things out with Tiffany. I didn’t realize how much of a negative impact I had on her game, and I felt bad about that. I had conversations with Liana because we had our rifts and stuff. There was still an existing rift with me and Shan that we didn’t address at Ponderosa. I think I left for the most part feeling decent with everybody probably except for Shan and Ricard.

TVLINE | I wanted to ask you about your relationship with Shan. It seemed to be very fragile and complex. Have you talked to her post-game, and where do you two stand now?
It’s still complicated. I saw her yesterday for the finale in Chicago. I don’t know, man. It’s a tough question to answer. I think we just maybe don’t mesh as people. I say this all the time, but I just want to be around people who I know for sure are in my corner. Everybody deserves that. Be around people you know really support you. And I’m not saying she doesn’t support me, I can just never really tell for sure. While I think that she was a great player on the show and I wish her all the best in life, I just don’t necessarily see a path for us, unless we can have a really major conversation. Likewise, she probably feels the same way. I want it to be real. I don’t want it to be just for show. We’ll see if we can ever have that conversation, but as of now, it hasn’t happened.

TVLINE | Final question: Are you ready to go back for another round?
Listen, I loved the experience. I thought it was really cool. Jeff [Probst], [executive producer] Matt [Van Wagenen] and everybody involved are amazing, and I feel like they kind of like me, too. I don’t know, maybe I was reading too much into that… If they asked me back, I would do it so long as I could do it. I’m starting med school in January, so the timing would have to be impeccable. But of course, it’s a once-in-a-lifetime opportunity, and if you get it twice in a lifetime, you can hardly pass it up. So, sure! I’d go back.