Grief is a very personal emotion, and that’s what Money Heist fans had to realize when Season 5B roared back into our lives Friday on Netflix.

The premiere opened with the Bella Ciao bandits mourning the loss of Tokyo, who valiantly died taking out a handful of Spanish Army soldiers and that murderous monster Gandia. Sagasta lied and said Tokyo killed the lady soldier as well when she pulled those grenade pins, but that wounded woman is  somewhere in hiding, waiting to pounce.

That said, no one took Tokyo’s death harder than the Professor, who had a complete meltdown in the bathroom while Benjamin and Marseille tried to calm him on the other side of the door. The pair was so preoccupied with the Professor and his all-encompassing grief and guilt, they didn’t notice Sierra had escaped with her baby and stolen a car. 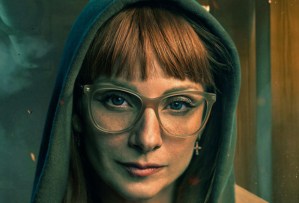 Sierra even had enough time to empty the clip in the Professor’s gun. (More on that later.) And she used that cuticle cutter she found to hot-wire the car, too. Oh, so that’s what she had planned? We thought she was going to use those cutters to stab the Professor. Our bad.

Sierra then sped off, and the Professor, who was shocked into reality by her escape, took chase along with Marseille in separate cars. The Professor also communicated with Sierra via some sort of vehicle-to-vehicle video system to tell the former police negotiator there was no use in running because there was a tracking device on the car.

This didn’t seem to sway Sierra’s speedy getaway attempt one bit, and instead, she used the time to verbally attack the Professor and get in his head. Sierra said the Professor’s boredom in paradise had cost Tokyo and Nairobi their lives amid his haphazard attempt to save Rio. Yelling at the Professor and consoling her screaming newborn simultaneously also caused Sierra to take her eyes off the road, and she nearly crashed into two oncoming trucks. 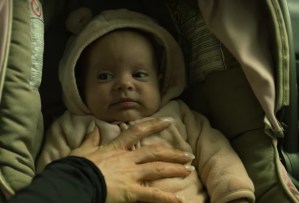 She blew her horn and made the trucks move as she sped between them, but afterward, even baby Victoria was looking at her with concerned and horrified eyes. (Ha! That baby is a great actress.) Sierra eventually played chicken with Marseille and shot out his tires, which left her and the Professor to fight it out in an abandoned barn.

Like a broken record, Sierra immediately started insulting the Professor for being bored. But the Professor said he wasn’t suffering from ennui at all. Instead, he said, he had planned to steal the gold from the Bank of Spain most of his life, and Rio’s incarceration provided the perfect opportunity.

There was a lot of back-and-forth afterward about whether or not the Professor would actually shoot Sierra, and she genuinely looked hurt when he pulled the trigger. Of course, there were no bullets inside because Sierra emptied his clip. That’s when Sierra tied up the Professor, threw him in the trunk and headed to Tamayo’s house to take his wife hostage and use the Professor as a bargaining chip.

Tamayo is a lot smarter than he looks, and as soon as he stepped into his flat, he pushed the panic button on his home-alarm system, and the police headed to his place with the quickness. Sierra didn’t realize this, of course, and as she played “Let’s Make a Deal,” the Professor used his wits and his teeth to escape from the trunk just before the police arrived.

He then used a ruse to get in Tamayo’s building. Soon after, when Sierra pulled a gun on him in the stairwell, the Professor knocked on a nearby door, and Sierra pulled her gun on the neighbor to force her to let them in. Here’s hoping that baby stays quiet long enough for them to get away.

What did you think of the Season 5B premiere? Grade it in our poll, and drop your thoughts in the comments.