“This time, people were actually dancing on the rooftops in New Jersey,” Oliver joked 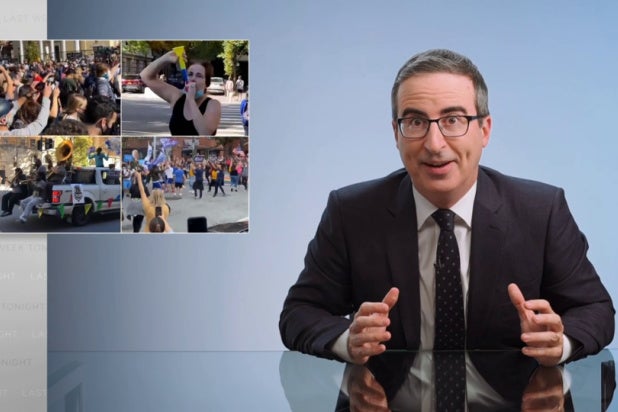 “Last Week Tonight With John Oliver” is not the most positive show on a normal week, thanks to Oliver’s regular deep dives into the major cultural and institutional problems that plague the United States. But this week’s episode was an exception, as Oliver allowed himself most of his half-hour to celebrate Joe Biden’s election victory and laugh at everyone involved in Trump’s failed reelection bid.

“Yeah, that definitely happened. Trump isn’t going to be president anymore,” Oliver said, delighted. “Something I personally learned from no less than 20 text messages from my friends and family all saying ‘it’s over.’ Which in this situation was welcome, but on any regular day, would terrify the living s— out of me.

“As we are taping this on Saturday, people across America are still taking to the streets to celebrate. Not just that Biden and Harris were elected, but you sensed mainly that a certain someone was about to get evicted from the White House.”

“Last Week Tonight” then pulled up a montage of clips of people celebrating on Saturday — the last of which showed a woman on a scooter yelling “F— Donald Trump.”

“You know what? That person screaming ‘f— Donald Trump’ from the back of a moving scooter actually sums up pretty nicely how a lot of people feel right now,” Oliver said. “And I’ve got to tell you, it was like that all day here in New York. There was a mood here that can only be described as a ‘reverse 9/11.’ Why? Because it combined complete euphoria, an abiding disgust for Rudy Giuliani, and this time people were actually dancing on the rooftops in New Jersey. It was a really good day — never forget!”

From there, Oliver spent the bulk of the show gloating and mocking attempts by Trump — along with his surrogates and his delusional fans who protested vote-counting last week — to try to undermine democracy and steal the election. He did, for the last few minutes of the show, look ahead to the next battles, and how Democrats really ought to try catering to the progressive people of color who delivered the victory for Biden, rather than the Republicans who opposed that victory.

But before he got into that, Oliver wanted to stress how important it is to savor this victory, even though it might not be the end of the fight against fascists and fascist sympathizers in America. Because, if nothing else, it will be psychologically helpful to not have to pay attention to what Trump is doing anymore.

“Here is the really important thing. After this absolute year of a week — the days of counting, the misinformation, the desperate, pathetic attempts to paint this process as fraudulent — the fact is Trump lost this election. He lost. All that bulls— which we’ve grown accustomed to seeing work, did not work this time,” a gleeful Oliver declared.

“And it’s not like Trump and his family are gonna stop. They’re gonna carry on grifting and lying like they’ve always done. But once he’s out of the White House, it’s just not gonna have the same effect anymore. It’s not gonna directly impact every American’s life, and that alone is fucking fantastic.”