Home » TV and Movies » 'In the Same Breath' Film Review: Explosive COVID-19 Doc Explores the US and China's Botched Responses 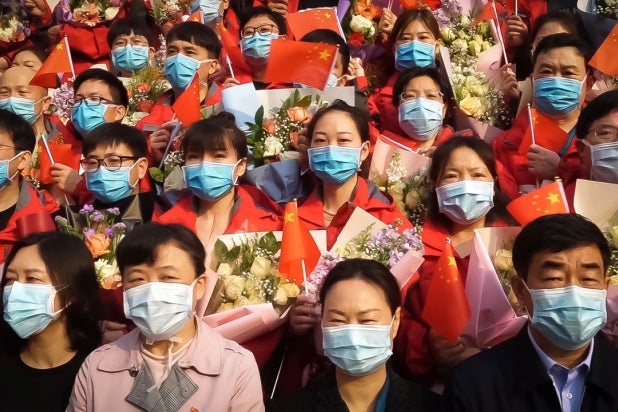 This review of “In the Same Breath” was first published after the film’s premiere at the 2021 Sundance Film Festival.

Already one of the most audacious voices in nonfiction storytelling, director Nanfu Wang has made a career exploring dark passages in the recent history of her native China. So when her homeland became the epicenter of the ongoing COVID-19 pandemic, she threw herself into a new project under less-than-optimal production conditions.

Premiering at Sundance, the outcome of her meticulous, risky investigation is the incendiary documentary “In the Same Breath,” whose clever title alludes to the botched response to the crisis in both the Asian nation and the United States, while referencing the respiratory malaise the virus causes.

To begin her detailed timeline, Wang turns the dazzling lights of the 2020 New Year’s celebration in Wuhan, the city of about 11 million people where the outbreak began, into an ominous sight. Those gathered were ignorant to the infectious killer that was already among them. Not only had cases already been detected and played down, but also, soon after, eight doctors who tried to sound the alarm were accused of spreading rumors about an unknown pneumonia. Wang returns to this decisive mishandling on several occasions.

Watch Video: How 'In the Same Breath' Director Got Multiple Camera Crews in Wuhan to Shoot COVID Doc

As with previous efforts such as “One Child Nation” or “I Am Another You,” the director embeds her personal stakes as they relate to the subject matter. Rather than being an impartial observant, Wang shares her fears after traveling to her hometown with her family around the time Wuhan went under lockdown on January 23, 2020. Alerted by social-media posts of people begging for medical attention or dying in the streets, she jumped into action and hired filmmakers on the ground with access to the hospitals.

What they captured is both heartbreaking and shocking; Wang’s aim isn’t simply to show the overwhelming emergency but to contextualize it. Via voiceover, she demonstrates how the truth is manipulated in the official account to uphold a façade of positivity. “We don’t have freedom of expression,” says a woman when one of the cameramen tries to interview her about how the sick and the dead are being handled. No one dares speak up for fear of retaliation in a country where the government keeps a tight seal on information, making facts elusive.

While casualties reached worrying numbers, the media was instructed to misinform about the gravity of what they were facing. Through repetition, Wang and co-editor Michael Shade make China’s strong grip on narrative strikingly clear. On multiple instances throughout the film, they show several anchors from a variety of TV stations relaying an important message using the exact same verbiage, word for word. The uniformity and compliance on the outlets’ part, and the population’s duty to believe what they say without inquiring about its veracity, speak of the loyalty demanded of them, one that prioritizes party and country before any individual’s liberties.

At the heart of the cover-up, it would appear, there’s a great deal of political paranoia. Everyone is taught that if negative information leaks into Western media, China’s image will be soiled, and that’s unacceptable. No matter the human or economic cost, the most critical goal is to appear as a functional, powerful system. To emphasize this, Wang shows video propaganda the state created, which frames the epidemic in a positive light. Nurses and doctors are seen doing their jobs with little urgency, and the scenes are scored with inspirational music. China overcomes disaster, the videos say, and it’s another triumph for the Communist rulers. The filmmaker notes how even those who lost family members in the horrific initial months of the pandemic still express their gratitude to the party with tears in their eyes.

Lest American viewers take this in as a cautionary tale on the perils of socialism, Wang then flips the focus toward the pathological individualism that’s preached as freedom stateside portraying it as equally dangerous. Aggressive pro-Trump protesters who deny science and claim that lockdowns infringe on their freedoms exemplify how prone some Americans are for brainwashing.

In the same breath, right-wing militants urge people to not listen to leaders blindly while having learned all the conspiracies and lies about the pandemic from the Trump administration. They deem themselves independent thinkers while donning MAGA hats and worshipping at the altar of Fox News. “In the Same Breath” reminds viewers that indoctrination is indoctrination, no matter the source.

Once Wang gets into the murky waters of the hoaxers here, one wishes she could dig deeper and examine the evolution of those fringe factions at length. That unfortunately doesn’t happen — likely given how much ground there is to cover with this story — yet her hard-hitting doc, both explores complex ideological battles and maps how a humanitarian calamity morphed into a political one in both countries. A unique artist, Wang has the discernment to make these connections because of her life experiences in both the Chinese and American systems.

Moving between the public and the classified, she elevates the piece with heartbreaking testimony from American nurses on the front line, retelling the nightmarish shortage of PPE and the CDC’s mismanagement across the board, and by discussing the consequences for journalists like Chen Qiushi, who outspokenly demanded answers from tight-lipped authorities. By the time “In the Same Breath” reaches its conclusion, with footage of 2021 New Year’s festivities, we comprehend that Wang is warning us about not just a physical contagion, but also the equally transmittable rise of authoritarianism across all latitudes.

“In the Same Breath” debuts August 18 on HBO.