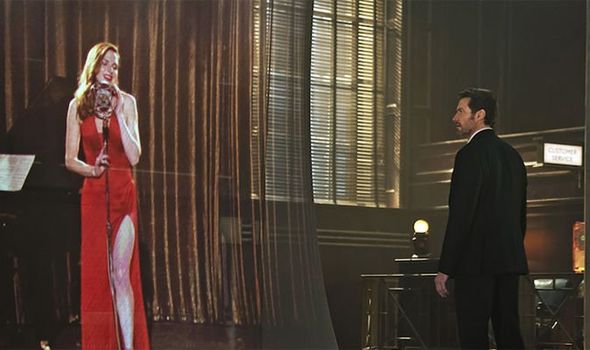 We’re in an overheated near future, half of Miami is underwater and the miserable survivors are yearning for happier, drier days.

Jackman’s ex-soldier, Nick Bannister, has hit on a way to cash in on rising sea levels.

In a damp former bank, he and his business partner Watts (Thandiwe Newton) sell sessions on a machine that lets punters relive their memories in vivid detail.

Beneath the sci-fi trappings, this standalone summer blockbuster (remember them?) is an old-fashioned film noir with cynical Nick turning private eye after a brush with a femme fatale.

As in The Greatest Showman, it’s Rebecca Ferguson’s singing that turns Jackman’s world upside down. The Swedish actress plays sultry chanteuse Mae who sashays into Nick’s joint asking for help with locating a set of lost keys.

So Nick views her memories on his holo-screen, then falls for her as she sings a haunting and eerily familiar number on stage at the Coconut Club.

A passionate romance ends with her sudden disappearance. Obsessed Nick can’t let her go, turning his back on his business to track her down.

Before long, he’s investigating her past links to a New Orleans drug dealer and a wealthy “land baron”.

The plot and the production design are largely forgettable but Joy poses some intriguing questions about memory and the role we cast for ourselves in the stories of our lives.

If you saw the brilliant first series of Westworld, Reminiscence will feel reassuringly familiar.