Disney+ had 7 of the top 10 most viewed films last year, while “Ozark” and “The Office” topped the most viewed series 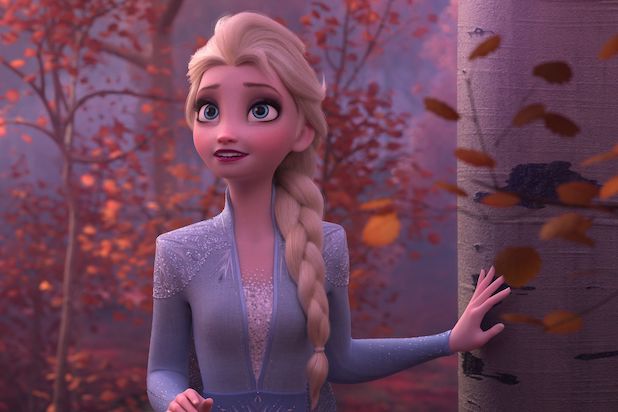 Disney’s “Frozen 2” was the most streamed film of 2020, according to a new metric Nielsen is releasing to track movies that are available to consumers for rental or purchase on demand through streaming platforms.

Nielsen unveiled its Theatrical Video On-Demand (TVOD) metric during a presentation at CES Tuesday, and along with it Nielsen unveiled its top 10 streamed movies, original TV shows and acquired series, with Netflix’s “Ozark” topping the original series list and “The Office,” which just left Netflix for Peacock at the start of the year, earning the top spot for acquired series.

Nielsen says “Frozen 2” was watched for 14.9 billion minutes, dwarfing the next highest ranking movie, “Moana” with 10.5 billion minutes. Disney+ in fact had seven of the top 10 most viewed films in 2020, while Netflix had the other three.

What’s more, the only new movies originally released in 2020 that were among the top 10 were the Pixar film “Onward” (8.3 billion minutes), the filmed version of “Hamilton” (6.1 billion minutes) and Netflix’s “Spenser Confidential” starring Mark Wahlberg (5.3 billion minutes). Beyond that, it was library content that drove the most consumption this year, especially family films, with “Secret Life of Pets 2,” “Dr. Seuss’ The Grinch,” 2019’s “Aladdin,” “Toy Story 4” and “Zootopia” all making the top 10 list for movies.

“Frozen 2” was dropped on Disney+ in March right at the onset of the pandemic, three months ahead of its scheduled release. And the move proved fruitful as it and “Hamilton” that summer helped boost signups to Disney+ in a big way as tentpole theatrical releases were pushed back during the pandemic.

Not present on the Top 10 list was Disney+’s “Mulan,” which Nielsen had previously said was viewed for 525 million minutes in its first three days of release. Disney released that film as a premium video on demand title, charging Disney+ users an additional $29.99 on top of the Disney+ subscription fee.

Among the most streamed shows, Netflix dominated 2020, with only “The Mandalorian” on Disney+ sneaking into the Top 10 among original series. Nielsen claims “Ozark” was viewed for 30.4 billion minutes, and that includes all 30 episodes of the show’s three seasons. “Lucifer,” “The Crown” and the docu-series “Tiger King” all performed highly on the charts, with “Tiger King’s” eight episodes generating 15.6 billion minutes of viewing.

“The Office” though was still king in its final year on minutes, amassing a gigantic 57.1 billion viewing minutes throughout the year. According to previous Nielsen numbers, “The Office” averaged 1 billion viewing minutes per week for five weeks running and never finished below fifth place on Nielsen’s weekly chart. And Netflix’s own internal Top 10 featured “The Office” among its curated list of most viewed shows more than any other program at 178 times.

Other acquired series that were big hits throughout the year included the Emmy darling “Schitt’s Creek” and “Grey’s Anatomy.”

Nielsen now says that due to massive changes in viewing habits during the pandemic, streaming now accounts for nearly a quarter (24%) of total usage among OTT capable homes, up from 21% just a year prior, and a much broader swath of consumers have enabled streaming capabilities in their homes.

Take a look at the full chart of 2020’s most-streamed shows and movies below: 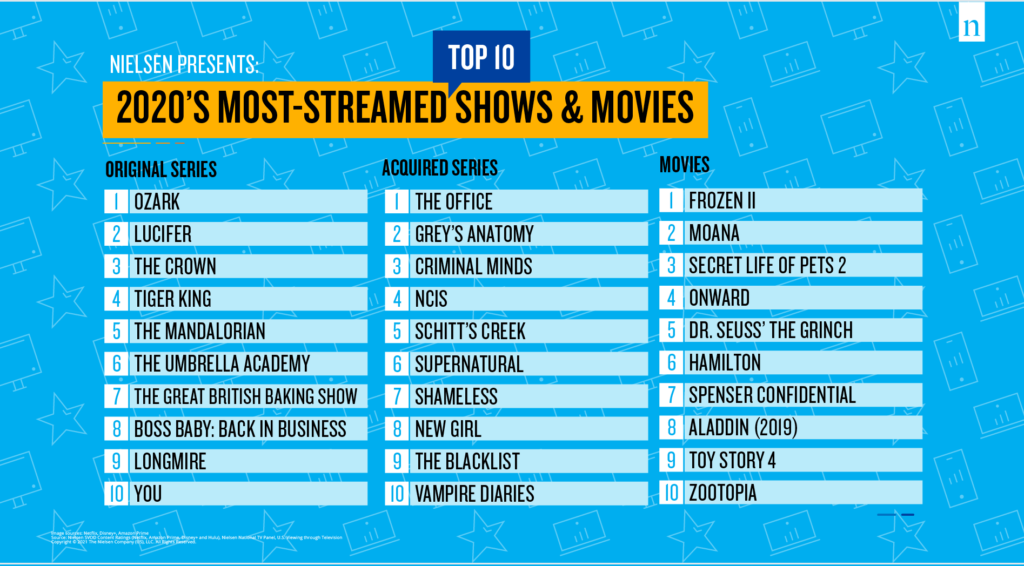