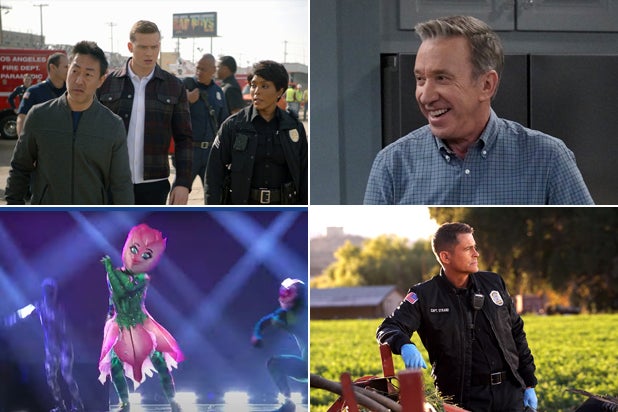 After pushing its scripted content to midseason in favor of a pandemic-proof fall schedule, Fox has finally set winter premiere dates for right series, including fan-favorite shows like “9-1-1” and its spinoff “Lone Star,” as well as newbies “The Masked Dancer” and Mayim Bialik comedy “Call Me Kat.”

First up will be the start for “The Masked Singer” spinoff, which will debut Dec. 27. After the new year, “Call Me Kat” and “Last Man Standing” will premiere back to back on Jan. 3. A new season of Gordon Ramsay’s “Hell’s Kitchen” will launch Jan. 7.

Live to all time zones

And here are the official descriptions for Fox’s new winter series, each in the network’s own words.

THE MASKED DANCER
This December, FOX takes TV’s #1 show and adds a little twist. Based on the smash hit FOX series THE MASKED SINGER and inspired by a popular segment featured on “The Ellen DeGeneres Show,” all-new celebrity competition series THE MASKED DANCER will have a special premiere Sunday, Dec. 27 (8:00-9:00 PM ET/5:00-6:00 PM PT, Live to all Time Zones), before having its time period premiere Wednesday, Jan. 6 (8:00-9:00 PM ET/PT). Hosted by comedian/actor Craig Robinson (“Ghosted,” “The Office”) and featuring celebrity panelists Ken Jeong (THE MASKED SINGER, I CAN SEE YOUR VOICE), world-famous choreographer and singer Paula Abdul, actor and the former “Giraffe” Mask on THE MASKED SINGER Brian Austin Green and actress and singer Ashley Tisdale, THE MASKED DANCER will feature celebrity contestants shaking their tail feathers, while covered from head-to-toe in elaborate costumes and face masks, leaving audiences to guess their identities. Costumed celebrities will be joined on stage by masked partners and back-up dancers, as they perform a series of dances together; spanning from hip-hop to salsa, jazz to tap dancing and more. When it comes to dance styles, the sky is the limit. Each week, a series of clues will be sprinkled throughout packages, costumes and routines, leading the panelists one step closer to figuring out which famous faces are freestyling behind the masks. Between all of the celebrity competitors on the show, they’ve amassed more than 38 million albums sold worldwide, 20 Emmy® Award wins, 20 Grammy® Award nominations, 10 World Dancing titles, five New York Times Best-Selling Author titles, four Olympic gold medals and three Broadway show appearances. THE MASKED DANCER is produced by FOX Alternative Entertainment and Warner Bros. Unscripted & Alternative Television and is based on the South Korean format, THE MASKED SINGER, created by Mun Hwa Broadcasting Corp and distributed by MBC America. James Breen, Craig Plestis, Daniel Martin and Ellen DeGeneres are executive producers of the series. Breen will serve as showrunner.

CALL ME KAT
New comedy CALL ME KAT, starring Emmy Award nominee Mayim Bialik (“The Big Bang Theory”), and executive-produced by Bialik, Emmy Award-nominated producer Jim Parsons (“The Big Bang Theory,” “The Boys in the Band”) and Darlene Hunt (“The Big C”), will have a special series premiere Sunday, Jan. 3 (8:00-8:30 PM ET/PT), following the NFL ON FOX doubleheader. The series then makes its time period premiere Thursday, Jan. 7 (9:00-9:30 PM ET/PT). Based on the BBC UK original series “Miranda,” CALL ME KAT stars Bialik as a woman who struggles every day against society and her mother to prove that she can still live a happy and fulfilling life despite still being single at 39. Which is why she recently spent her entire savings to open a cat café in Louisville, Kentucky. It was expected of KAT (Bialik) to be married with kids by now, but for many reasons, she’s still single – and totally fine with it. Of course, Kat’s mother, SHEILA (Emmy Award winner and Golden Globe nominee Swoosie Kurtz, “Mike & Molly,” “Sisters”), views her daughter’s single-hood as her own personal failure, but Kat remains determined to live a fulfilling life, and charts her own course to happiness. Working alongside Kat at the café are RANDI (Kyla Pratt, “One on One”), a confident millennial and self-proclaimed “non” cat person; and PHIL (Emmy Award winner Leslie Jordan, “The Cool Kids,” “Will & Grace”), who recently broke up with his longtime partner. Although Kat celebrates her independence, her single-forever plans may begin to veer off-course, when her former crush and good friend, MAX (Cheyenne Jackson, “American Horror Story,” “30 Rock”), returns to town and takes a job as a bartender at the piano bar across the street, working with his friend, CARTER (Julian Gant, “Good Girls”). CALL ME KAT is produced by That’s Wonderful Productions!, Sad Clown Productions and BBC Studios’ Los Angeles production arm in association with Warner Bros. Television and FOX Entertainment. Darlene Hunt is the executive producer and showrunner. Additionally, Jim Parsons, Todd Spiewak (That’s Wonderful Productions!), Mayim Bialik (Sad Clown Productions), Miranda Hart, Angie Stephenson (BBC Studios) and Beth McCarthy-Miller also serve as executive producers. McCarthy-Miller directed the series premiere.