Don’t call it a glow-up, call it a glow back. Anisha Ramakrisha debuts a new, well, old look in the season 2 premiere of Family Karma, setting the tone for a revamped and ramped up sophomore run on reality TV.

“People don’t realize … when we were filming season 1, I had just ended my 12-year relationship. I didn’t know what was happening to me,” the 36-year-old fashion professional tells ET over video chat. “Really, I was lost. I was still the only single, straight cast member, and people don’t realize I gained 30 pounds and I chopped all my hair hair off.”

“I always looked like this before,” she says, gesturing to her current appearance, which features a longer, sleeker hairstyle (and a revised hairline). “I got to a good place in my life and just started taking care of myself, and went back to who I was, who I’ve always been. And so what you’re seeing in season 1 is just rock bottom, which is fun. It’s fun. I always say I thrive in the chaos and enjoy every moment. You know, I have no regrets, but at that point in my life, I was in a bad place.”

Anisha says her entire cast actually had a “great glow up” between seasons, thanks in part to having a better understanding of what making the show entails.

Anisha’s next chapter kicks off with her decision to freeze her eggs, a hot-button topic that led to tears in season 1, in part due to her mom, Chitra’s, apprehension to the idea. The season 2 premiere kicks off with Chitra vocalizing a change of heart, confessing to a producer, “See, when you say ‘eggs,’ four years ago I thought, cage-free eggs. But if my daughter can have a kid, I’m happy. I’m content. Or maybe she’ll just have a baby naturally.” 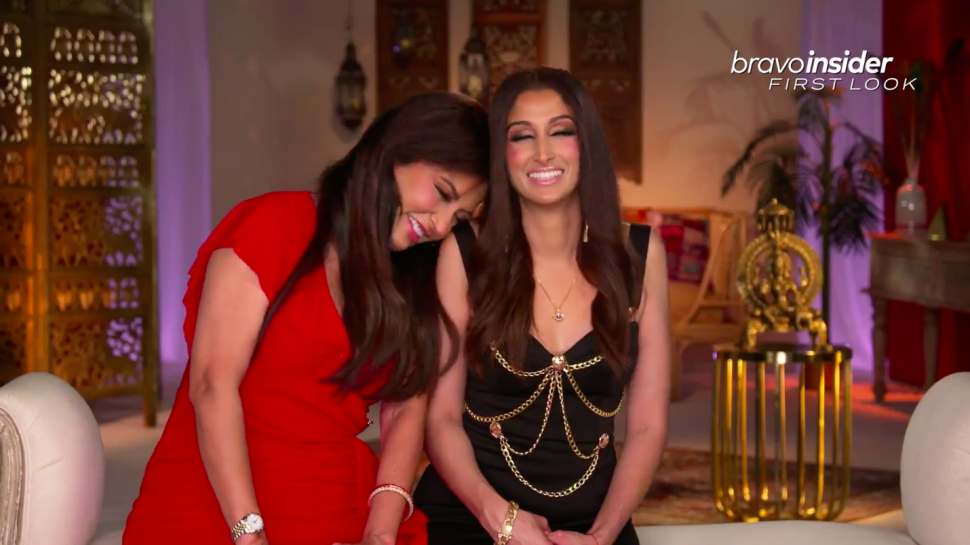 “I wanted to share that story because not only is it something we don’t talk about in Indian culture, I think most women don’t talk about it,” Anisha notes, “and after people saw that I did it, it’s like women started coming out of the woodwork telling me, ‘Oh, I have done it.’ And I’m like, ‘Well, why didn’t you ever say anything?’ Because I think it’s so helpful, I would have liked to have known whether someone did it or not, you know? I had close friends coming up to me, telling me, ‘Oh, that’s how we had our child,’ and I’ve known them for 10 years!”

“It’s not taboo, I won’t say it’s that extreme,” she continues, “but I feel like there’s a stigma to it, or there’s some shame to it that you have to do it. And you know, I’ll be honest, [you saw] that in season 1, that’s not something I dreamed of doing. But when you also sign up for this platform, I think it’s best to go big or go bigger.”

Anisha says she believes her mom when she says she’s “happy” and “content” with her decision, but admits Chitra was “confused” by the whole process, accompanying Anisha to multiple doctors visits and procedures, all captured by the Family Karma cameras.

“I’ll say, a lot of people that are watching are going to learn, because I myself was ignorant about the process and my own body,” she shares. “I was like, ‘What are ovaries? What are follicles? Those are in me?’ I had no idea, to be honest, because we’re not really taught to think about these things. And so, I’ll say my mom’s happy after the fact that it was done. But while I was pondering the idea, she was just not understanding. She was like, ‘Why can’t you just do it like everyone else, Anisha?’ And I’m like, ‘With who?’ And you know, ‘When?’ You see my grandmother in season 1 is like, ‘It just takes 10 minutes…'”

Anisha has been celibate for three years, partially by choice, partially due to the pandemic.

“It’s nothing to be ashamed about,” she says. “Can we normalize celibacy and working on yourself and self-care and self-love? I had to do it. I honestly didn’t want to be with anybody, and I had just come out of this long relationship. And so, I put that out there, too. Like I said, I have nothing to be ashamed about, that’s part of my journey. And although my castmates do have a few things to say about it, it’s just something that happened naturally. It’s not like I went out there wanting to be celibate. I just didn’t meet anyone to do it with.”

“The pandemic affected a big part of it, too, because that’s kind of when I wanted to start dating,” Anisha adds. “Especially with season 1 airing, that was kind of like my comeback moment. And then, they were like, ‘No. Jail.'”

Anisha broke out of that “jail” to film season 2, getting together with the full season 1 cast plus some newbies to make season 2 happen — and, as expected, she promises the parents/aunties cause way more drama than the kids.

“On a lot of these shows, you see people amping it up for the cameras. We don’t do that,” Anisha proclaims. “I think the difference between season 1 and season 2 is, in season 1, we were all scared of what our parents would be like on the show. And our grandparents were worried about our families and our relatives. And then after doing season 1, we realized, wait. They don’t care. They don’t have their guard up. Why do we? And so I think you’re just going to see us becoming more open in season 2. And what I love about our show is everyone has such a unique story. Everyone’s journey is so different and that’s what I’m excited about. When I watched the show with all of you, because that’s how we watch it, I’m curious to see what happened with everyone else.”

A big part of season 2 is the intersection of South Asian culture and the LGBTQ community, fitting as the show returns during Pride Month. Anisha’s childhood friend, Dillon Patel, joins the show, becoming the second openly gay man on the main cast, alongside Amrit Kapai. As teased in the trailer, Amrit takes a big step, coming out to his elderly grandmother after moving in with his longtime boyfriend, Nicholas. 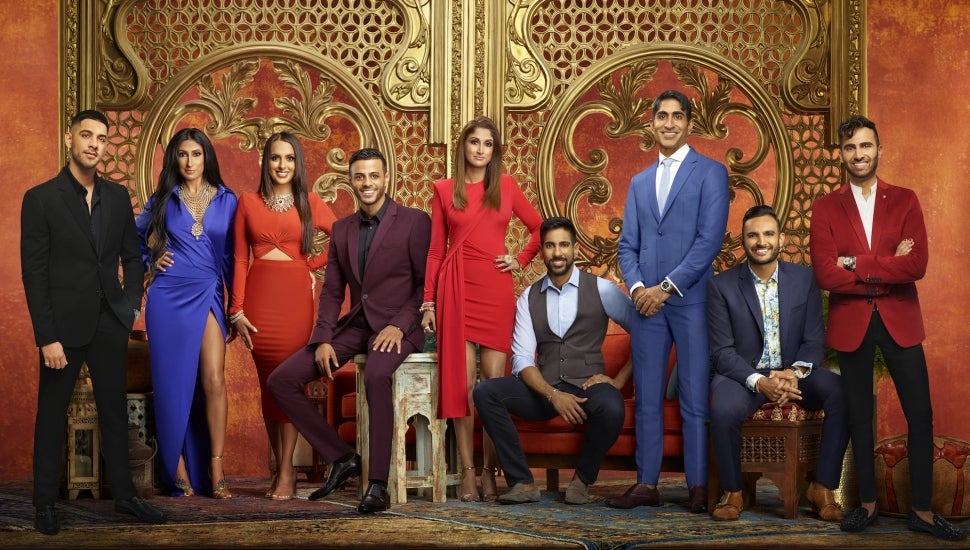 “Coming out is terrifying,” Amrit says in the season 2 first look, with his mother adding, “In India, [gay people] are shunned.”

“I think in 10 years, people are going to watch Family Karma and their minds are going to be blown,” Anisha remarks, “because we’re in it right now, so we don’t realize how important it is for, not only TV history, but for minorities, of all people. And so I think Amrit, and Dillon, they’re doing big things for the LGBTQIA community. And you’re going to see — I don’t want to give away story — but a lot. You’re going to see a lot of progress with them, as well as in their individual stories that you would never see. I don’t think you’ve ever seen, actually on TV. You’ve never seen South Asians do what they’re doing on our show on TV. It’s never been done. So I think that’s pretty iconic.”

Anisha says the thing that makes her most proud about Family Karma is that the show helps show those who might not know that Indian people, South Asian people are not a monolith.

“Representation matters. We freeze our eggs, too,” she quips. “We’re gay, too. We have annoying parents. We have the same issues as everybody else. Maybe just adding a few, like, chilies and some coconuts, but we’re all the same.”

And that includes petty drama, too. In the premiere alone, viewers will see Dillon butt heads with Amrit’s bestie, Vishal Parvani, almost immediately — “I think the viewers will have to watch,” Anisha teases of whose side she’s on, “but I will say in life, I do think you have to pick a lane. So I definitely do pick a side” — as well as Anisha calling her co-stars “whack people,” though she doesn’t seem to remember making the dig.

“Is that what I say?” she cringes. “Yeah, so let’s say they’re interesting to say the least. Apparently I say, ‘whack people.’ Wow. I’m like, who’s going to talk to me next week?”

One of the people whom Anisha labels “whack” is Monica Vaswani. The pair fell out toward the tail end of season 1, when Anisha made a joke about Monica hooking up with co-star Brian Benni. Anisha is mum about where she and Monica stand today, but says it’s “fantastic” that there is now a second Monica in the group… who is dating Brian! 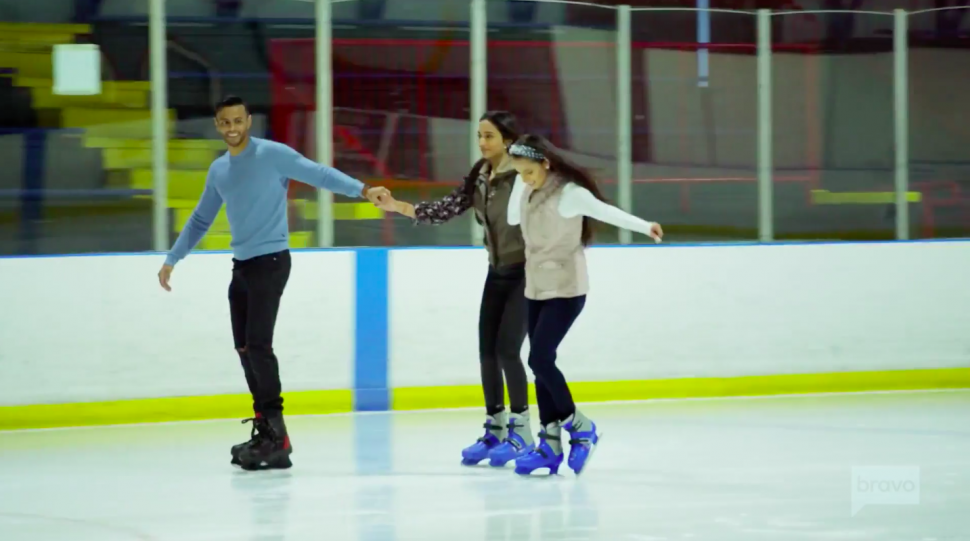 “The more the merrier, right?” she asks. “I think it’s hilarious. I’m like, what are the chances? I think it’s perfection and it’s just so funny because you can’t even say it was planned. … [Brian’s] had, like, four [Monicas]. People don’t know that. It’s just like, he has a type.”

Anisha says she’s excited for viewers to experience the dual Monica dynamic, as well as the expanded group dynamics as the season progresses. “I love the parts of the show when we’re all together, and whether we’re having a tiff or we’re having a good time, I think that’s when we have the most fun,” she says.

“I’m so excited,” she gushes, “and we have, like, almost a cult following, even though the show is so new. The people who do watch the show, I think I know all of them. Like we talk, we interact, especially because of the pandemic, we got to really get to know our fans. But I feel like what’s different about our show, we have diehard fans… and people want more. As soon as it ended, they were like, ‘Wait, where’s the rest?'”

“I think you ain’t seen nothing yet!” she declares.

Family Karma airs Wednesdays at 9 p.m. ET/PT on Bravo, and if you need more Anisha in your life, check out her podcast, Currently Cringing, from DearMedia. New episodes debut weekly wherever you listen to podcasts.