Home » TV and Movies » 'Falcon and the Winter Soldier': Anthony Mackie Will Not Be the Only Captain America on the Disney+ Series

Anthony Mackie’s Sam Wilson will be the next Captain America following the events of Avengers: Endgame in the upcoming series Falcon and the Winter Soldier. Steve Rogers (Chris Evans) passed the mantle to Sam in the final moments of the movie, and the story of that transition will take center stage in the upcoming Disney+ series. But Mackie won’t be the only actor portraying the iconic superhero in the show. 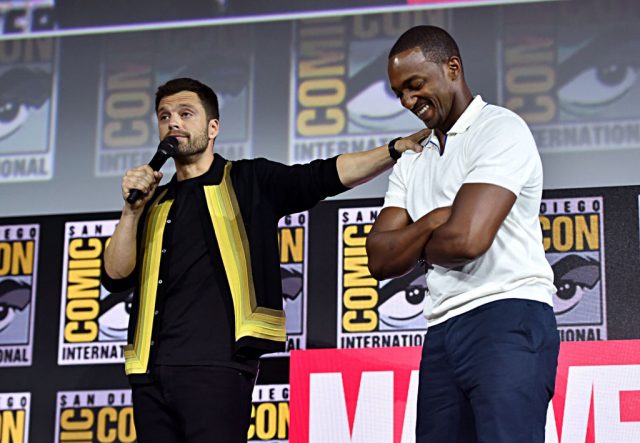 Mackie confirms he is the new Captain America

Ever since Steve handed Sam his shield in Endgame, fans have been wondering what will happen next with Mackie’s character. The actor is set to play one of the leads in Falcon and the Winter Soldier, and it sounds like he will make his big debut as the new Captain America in the series.

While promoting the new season of Altered Carbon, Mackieopened up about his thoughts on playing a popular character like Cap. Accordingto Canoe,Mackie revealed that he is looking forward to representing everyone in thecountry, regardless of race.

Mackie also teased that fans will learn more about Sam’s history, something Marvel really didn’t get a chance to explore in the Marvel Cinematic Universe. He did not reveal any other details about the show, but fans are convinced Sam won’t be the only Captain America in Falcon and the Winter Soldier.

Will there be two Captain Americas?

Rather than allowing Sam an easy transition as the new Captain America, fans are theorizing that Marvel is going to make things hard for him early on. To that end, the show will introduce another character who is competing for Cap’s shield.

Marvel has not confirmed the Falcon and the Winter Soldierrumors, but sources claim that Sam will lose the shield to John Walker, who isbeing played by Wyatt Russell in the new series.

A few leaked photos from the set seemingly show another person wearing the Captain America costume. It is difficult to say what is going on in the photos, but a new video has surfaced that shows the different Captain America fighting alongside what appears to be Bucky (Sebastian Stan).

Filming for Falcon and the Winter Soldier is in the finalstages. The series is set to premiere this summer, so we’ll probably hear moreabout the project as we get closer to the first episode.

The video in question clearly features a fight scene betweenCaptain America and a bunch of goons. Cap easily fights off the men, though thecontext around the scene remains unclear.

What is interesting about the Falcon and the Winter Soldier clip — which was shared on social media — is that it shows what looks like Bucky opening up an armored car in the background. A handful of hostages pour out of the van and Bucky quickly escorts them to safety.

We do not know if the scene features some kind of collaborationbetween Bucky and the other Cap, but it definitely looks like they are teamingup.

If that is the case, then Bucky’s friendship with Sam could bestrained on the show. That said, it is possible that the other Cap is also agood guy and that all three of them are working together.

At this point, it is just too early to tell what is really goingon. Hopefully, that will change over the next few months.

This character will return in ‘Falcon and the Winter Soldier

A rumor recently surfaced about how Batroc the Leaper (GeorgesSt-Pierre) will be coming back in a big way. The reports were fueled afterSt-Pierre recently told his Instagram followers that he is working on a newshow.

Filming for The Falcon and the Winter Soldier started uparound the same time St-Pierre made the announcement. Marvel, of course, hasnot commented on the reports surrounding the upcoming series.

Fans can watch Mackie take Cap’s mantle when Falcon and the Winter Soldier premieres on Disney+ in August.