When we last saw Larry David, it wasn’t on “Curb Your Enthusiasm.” He was peering through his back window in the pages of The New York Times. Or he was reviving his “SNL” alter ego, Senator Bernie Sanders, from what appeared to be a chair in his home office. Or he was explaining the virtues of stay-at-home orders on behalf of the State of California. (“I basically want to address the idiots out there…” remains a timeless introduction.) As the coronavirus started to spread, one could argue Larry David was the first face of the pandemic — the curmudgeonly source of comfort for so many uneasy Americans, still searching for smiles in increasingly difficult times. In part, it was a title bestowed by timing: “Curb Your Enthusiasm” wrapped its tenth season in March 2020, so those watching weekly had Larry on the brain, and anyone who’d fallen behind now had plenty of time to catch up.

But “Curb” wasn’t meant to tackle the pandemic; it was meant as relief from it. David, along with showrunner and executive producer Jeff Schaffer, acknowledge as much in the Season 11 premiere, “The Five-Foot Fence,” as the fictional Larry David goes about life as usual. He’s dating, he’s going to dinner parties, he’s attending large indoor gatherings — and he’s ruining every single one. That’s what he does. It’s what he’s always done. HBO’s Season 11 tagline reads, “The world has changed. He hasn’t,” and while that doesn’t dismiss the possibility of watching Larry debate proper masking policies or readdress “the idiots” about not getting vaccinated, the hysterical first episode also illustrates why the big-picture stuff rarely invades TV Larry’s world. His life is one of glorious hypocrisies and picked-apart social customs, revolving around relatable minutiae instead of being dominated by topical universality. 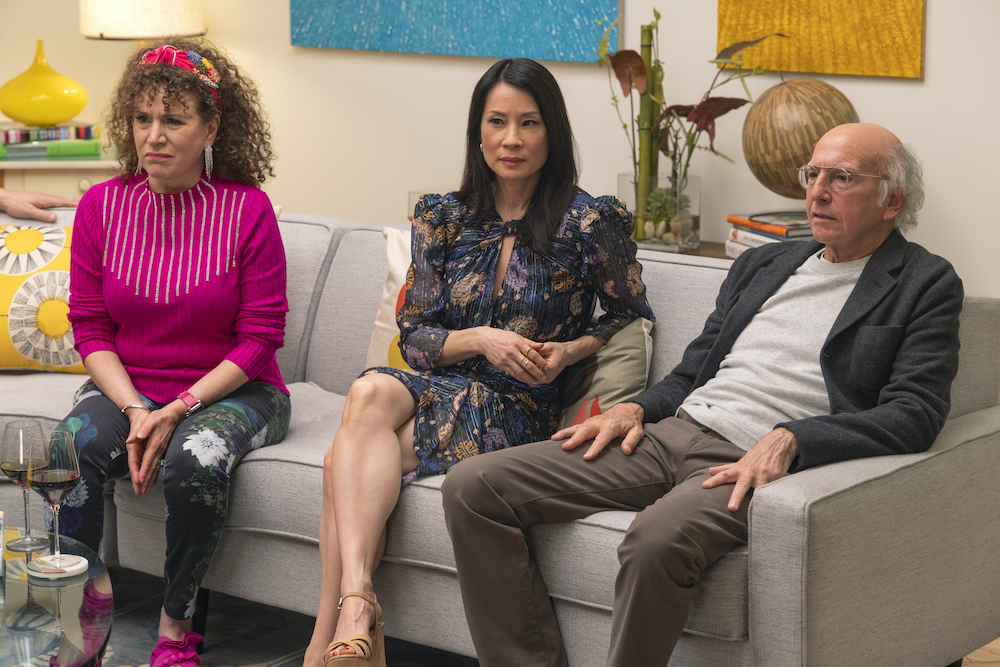 Just look at one of the early gut laughs of Episode 1. When Albert Brooks pops by to borrow a photo for his “live funeral” (a practice that’s been around since at least 2005, when I saw Michael Caine’s character throw one in “The Weather Man”), he checks how Larry is feeling, after walking into a glass door the night prior. “Did you get an MRI?” he asks. “Do you know what a brain bleed is?” Larry quickly and honestly responds, “I don’t care.” He would rather die suddenly in his sleep from an unchecked head injury than go to the hospital every time he bumps into his head. (More specifically, he’d rather die than spend the money, or he’d rather die than deal with the insurance paperwork.) In a time when we’re all still grappling with the long-term effects of a global pandemic, be it psychological constraints about reentering public spaces or very real concerns about catching breakthrough COVID, it’s extra gleeful to see Larry take his good health for granted. Even Brooks wants to laugh, while telling Larry to drop dead.

While the episode acknowledges the pandemic when Brooks is exposed as “a COVID hoarder” (by Larry, of course), its lead is far more concerned with getting his money back from the conveniently forgetful Dennis Zweibel (John Pirruccello from “Barry”) and launching his new show, “Young Larry,” at Netflix. Technically, he’s most concerned with avoiding the legal hullabaloo of the wrongful death lawsuit threatened by Marcos (Marques Ray), unless Larry casts his daughter, Maria Sofia (Keyla Monterroso Mejia) in the project. That Larry would rather risk cratering the easiest pitch of his life than pay for his lawyers to eventually settle with Marcos tells you everything you need to know about the wealthy man’s priorities: They’re the same as they’ve ever been.

“Curb’s” are, too, with the fundamental rule still intact: Be funny. Scattered among the 42-minute premiere are big laughs from veteran players and superb guest stars — and I’m not just talking about Jeff Garlin’s echoing guffaw during the funeral. Jon Hamm nearly steals the show again, first by explaining why the movie based on Larry went away (“The audience didn’t really respond to the main character. The word that kept reappearing was ‘repugnant.’”), then by deftly incorporating Yiddish into his adoring eulogy of Albert and, soon after, his direct evisceration of him. (“You’re sitting over here with a closet full of toilet paper? Unbelievable. Shanda! A shanda!“) 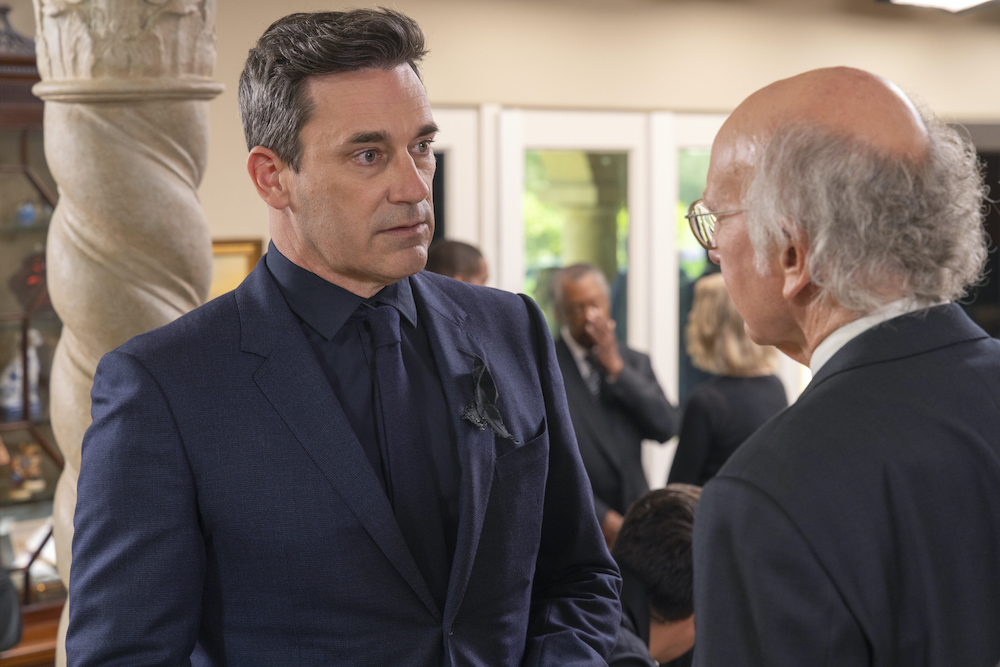 Jon Hamm in “Curb Your Enthusiasm”

Guest acting Emmys were built for people like him, and I’ve give one to Lucy Liu, too, whose reaction to Larry crashing into that door tells you all you need to know about their relationship going forward. Meanwhile, Leon’s seasonal arc is off to an excellent start; you have to love his casting call for a new Mary Ferguson, after seeing the original befall the same fate as Larry. (There’s just no coming back from walking into a door, though both klutzes fared better than their HBO counterpart, Selina Meyer.) And any plot twist that results in casting “Idiotsitter‘s” Charlotte Newhouse is an automatic win.

When we last saw the “Curb” version of Larry, his Spite Store was up in flames and his petty schemes had backfired once again. At the end of Episode 1, he’s sitting with Albert Brooks, dateless, his new project in turmoil, and his social circle as perturbed as ever. But his fans should be soothed to the point of elation. “Curb Your Enthusiasm” is back, same as it ever was, but never resting on its laurels or taking the easy way out. Season 11 is still working for our laughter, even as the music plays on. “[bum bum bum]…”