After years of rumors and delays, Netflix’s jazzy, bloody live-action reboot of Cowboy Bebop has finally landed — and it knows how to make an entrance.

Friday’s premiere of the sci-fi anime adaptation opens with a space casino being held hostage by a gang of gunmen, with the ringleader Tanaka ranting about “corporate cockroach a—holes.” His rant is interrupted by the ding of an elevator, announcing the arrival of bounty hunter Spike Spiegel, played by John Cho and cool as a cucumber. He and his partner Jet Black (Mustafa Shakir) shoot and stab their way through all the henchmen until Tanaka’s the only one left. When he takes an old lady hostage, Spike scoffs: “She looks like she’s lived a very rich, full life.” But one more henchman emerges from the bathroom, and he’s packing a scary weapon called a Disruptor. Spike shoots him, but the Disruptor goes off and fires an energy blast through the wall, opening up a hole that sucks everything out into space. They hang on for dear life, and Jet Black hits the emergency switch to close up the hole just before Spike gets sucked out. All in a day’s work, huh? (And yes, the opening credits are still great.) 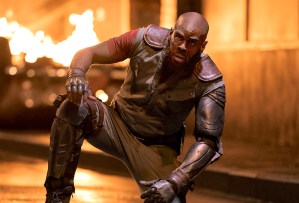 We flash back to Spike falling in love with a mystery girl, getting shot and losing the girl before he wakes up. He’s aboard the rusty spaceship BeBop, with Jet at the helm. Jet needs a fresh bounty to buy his daughter a birthday gift, so we meet their next target: a crook named Asimov who’s trying to sell a stash of a drug called Red-Eye, along with his pregnant girlfriend Katerina. The problem is, he stole the drug stash from a criminal gang called the Syndicate — but when some of their goons try to get it back, he takes the drug, and it turns him into an invincible fighting machine. (“It feels like I just mainlined God!”) And since Spike and Jet got charged for all the damage they did to that casino, they could use some income.

They land in New Tijuana — where Spike vowed never to go again after he got stabbed while trying to buy a churro — and ask around if anyone’s seen Asimov. Spike tracks him to a hospital, where he’s forcing a nurse to patch up his wounds at gunpoint. Spike spots Katerina outside, and they strike up a flirty conversation. (“You just remind me of someone,” he tells her.) But he’s interrupted by a gun being pointed at his head. It’s held by a rival bounty hunter named Faye Valentine (Daniella Pineda), and she’s on the hunt for Katerina — whose rich and powerful father is worried sick about her. Spike and Faye scuffle in a hand-to-hand brawl, and she nearly stabs him before Asimov and Katerina speed away, distracting Faye enough to give Spike the upper hand. 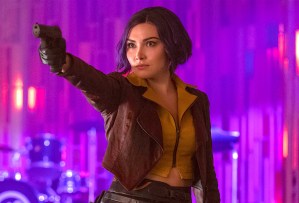 He handcuffs her to the toilet aboard his ship, and he’s wary of the Asimov bounty once he learns the Syndicate is after him, too. Jet still needs birthday money, though, so they take a pair of smaller vehicles and resume pursuit. Left alone, Faye manages to free herself and tries to track them using the ship’s computer. It’s password-protected, but the guys left the password out on a Post-it…. and it’s “beans.” (“F—king idiots,” Faye grumbles.) Spike and Jet catch Asimov and Katerina at the airport just as they’re hijacking a plane. Asimov takes more Red-Eye and fights them off, and then the Syndicate arrives, and a full-blown gunfight erupts. Katerina gets caught in the crossfire, and she’s hit, with red liquid spilling from her midsection. Oh no… except it’s not a baby. She wasn’t pregnant; she was just hiding a stash of Red-Eye vials under her shirt.

As Spike takes out the Syndicate goons, a drug-addled Asimov nearly chokes out Jet… but Faye drops him with a shot from her rifle. Katerina drags his body into a plane and takes off — “Daddy’s little rich girl can fly,” Faye quips — with Spike close behind. She flies up to a gate where she’s warned to stop or they’ll shoot, but with Asimov dead, she has nothing left to live for. Spike tries to stop her, but she flies on and gets annihilated by ten thousand bullets, her dead body floating out into space. The one surviving Syndicate goon reports back to his white-haired leader that some “cowboys” killed a dozen of their men. He thought it might be a guy they knew as Fearless… but Fearless is dead, right? The white-haired guy isn’t happy: He slits the goon’s throat and orders his minions to bring him Fearless’ head. Then he lights the cigarette of a blonde girl before they kiss, and we see her rose tattoo. Is that Spike’s lost love? We’re just getting started, folks.

Give the Cowboy Bebop premiere a grade in our poll, and hit the comments to share your first impressions.