Home » ‘Can’t string a word!’ The One Show in chaos as Paul Merton blasts Ian for being ‘drunk’

The One Show: Paul Merton accuses Ian Hislop of being ‘drunk’

With the satirical panel show still going strong three decades in, Have I Got News For You stars Paul Merton and Ian Hislop joined Alex Scott and Alex Jones on The One Show on Wednesday to discuss the new series. However, despite Paul being in the BBC studio and Ian beaming in via video link from his own home, the pair still managed to show off their comedic chemistry on-screen. And the pair soon had everyone in stitches when Paul accused Ian of being drunk live on air, which his co-star admitted was: “Absolutely right”.

The moment came after Paul had recalled some of his favourite guest hosts from years gone by and touched upon some of the new faces taking to the presenting chair this series.

Alex Jones then turned her attention to Ian as she began: “The news this year has, of course, been dominated by the pandemic and Donald Trump’s out of the picture,

“So what is rich pickings then, Ian?” she asked, prompting the HIGNFY star to reply: “It’s been very good because suddenly there’s a lot of good news around.

“It means we can go back to other sorts of stories,” Ian added. 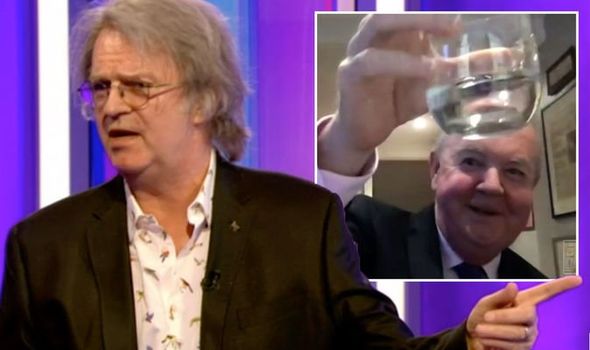 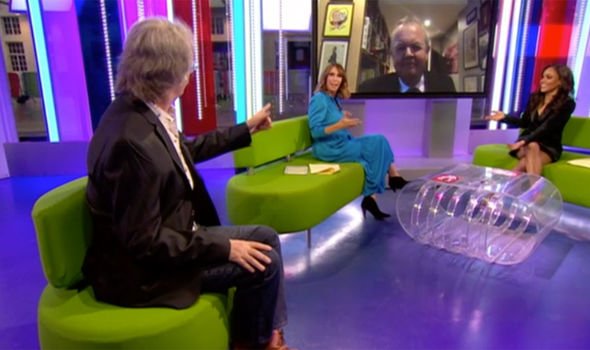 Continuing his answer, the HIGNFY appeared to lose his train of thought – which was quickly picked up on by Paul in the studio.

Ian continued: “Suddenly everything’s kicked off in this country, as you – as you probably noticed.

“There’s – I mean, it was brilliant having Adrian Dunbar on who’s speciality is corruption and then we had a week where we’re looking at corruption in public life.

“And he’s looking out for the erm – the worst offenders. So, you know, he could ‘Mother of God’, whenever we came up with a story about yet another… bad behaviour in high places.” 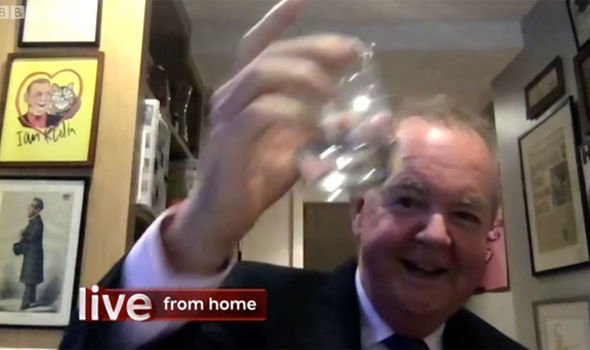 Ian signed off his answers by taking aim at Prime Minister Boris Johnson and the recent headlines he’s made over flat renovations.

However, Paul was more concerned with the amount of umming and ahhing in her co-star’s retort.

And not letting it slide, Paul brought the show to halt to tease: “I think he’s drunk?

“Does anybody else think he’s drunk? He’s coming across as drunk, isn’t he?” Paul said as Alex Jones and Alex Scott began to laugh.

Alex Jones then replied: “He’s being very careful [with what to say].”

“This is a good thing for kids at home,” Paul continued as he mocked his co-star, “who want to grow up to edit a satirical magazine,

“And there he is, look, it’s quarter past seven and he can barely string a word together.”

Ian could be seen chuckling from home before he gave up the act, lifting a glass up to the camera.

“He’s absolutely right,” Ian said as laughter continued to erupt in The One Show studio.

“My cheeks are hurting,” Alex Scott joked after giggling at the two’s back and forth.

Luckily for The One Show hosts, Ian and Paul did just about regain their composure to move on with the rest of the programme without a hitch.

The One Show continues weekdays at 7am on BBC One.