Home » TV and Movies » 'Brooklyn Nine-Nine': Amy and Jake Try to Have a Baby

The newest episode of season 7 of Brooklyn Nine-Nine is appropriately titled “Trying,” with the main plot of the episode focused on Jake and Amy’s efforts to have a baby. The episode feels different in structure than past episodes and includes a six-month time jump. While the show is still as funny as ever, Jake and Amy’s story is much more emotional than previous story lines.

[Spoiler Alert: This article contains spoilers for the most recent episode of Brooklyn Nine-Nine.] 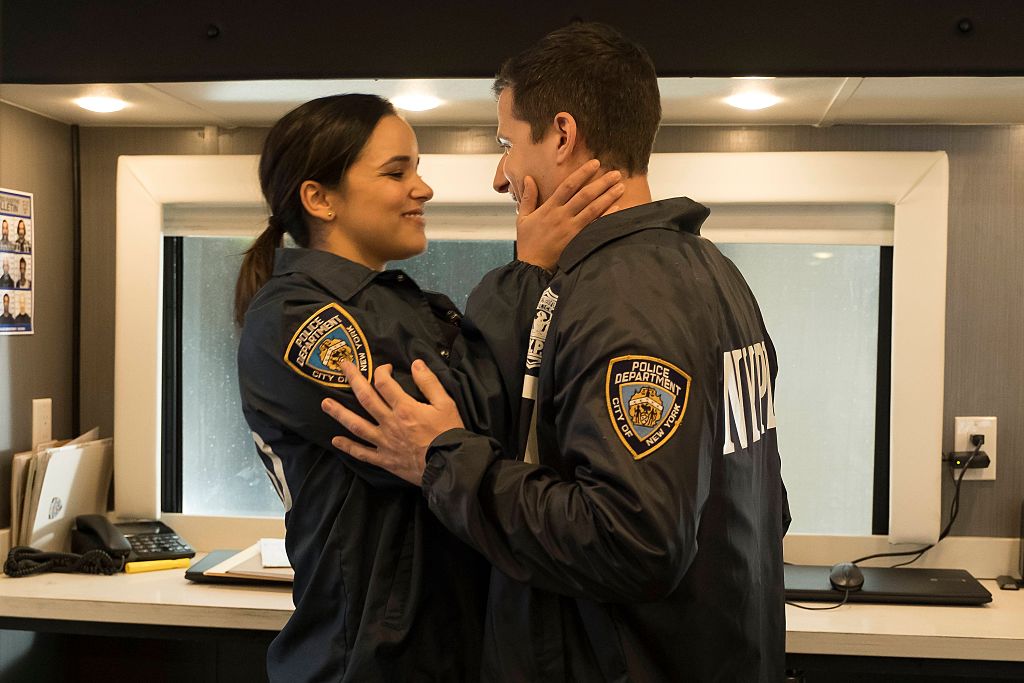 The cold open focuses on Hitchcock and Scully’s relationship. Hitchcock is getting divorced again, so Scully is throwing him a divorce party. The whole squad is in attendance, while Hitchcock is miserable, wondering why the relationship failed. This misery does not last for long, as he spots a woman in the bar and leaves with her.

In the next scene, Amy and Jake disagree on how to best have a baby. Amy wants to rigorously plan everything, while Jake wants to go with the flow. After Jake’s way is unsuccessful, Amy comes up with an intense plan and schedule on how to optimize their chances of conceiving.

The Nine-Nine cleans up pretty nicely, don't you think? #Brooklyn99

Meanwhile, Terry deals with two separate problems in the precinct. Holt wants to be reassigned a new beat because he is bored, but Terry refuses to give him special treatment. He also has to deal with Charles who brings two guinea pigs into the precinct after his son Nikolaj ends up being allergic.

Over the next six months, Holt begins to connect with the people he encounters every day while walking his beat. The guinea pigs keep breeding, and Charles and Rosa suddenly have hundreds of guinea pigs on their hands.

Hitchcock reconnects with the woman he met at his last divorce party, and announces that they are expecting a baby. This causes Amy to snap, as she and Jake have been unsuccessful in trying to get pregnant. At Hitchcock’s wedding, Jake and Amy decide to try and get pregnant the “Hitchcock Way” by making the worst decision possible in every situation.

Because Holt now understands Russian thanks to walking the same beat every day, he deduces that Hitchcock’s new wife Anna is lying about Hitchcock being the father of her child. As a result, Hitchcock gets divorced again.

The hundreds of guinea pigs escape throughout the precinct, and Terry insists that his friend at the research lab will take them. He also reassures Charles and Rosa that they will just be running mazes and will not undergo any chemical tests.

At Hitchcock’s divorce party, Amy tells Jake she’s miserable trying to get pregnant because she doesn’t like not being able control the outcome. Jake reassures her that they are a family no matter what, and they can always try IVF or adoption if conceiving naturally does not work.

The Brooklyn Nine-Nine episode ends with Amy taking another negative pregnancy test. Except instead of being disappointed, Jake and Amy give each other a reassuring look. They’re a family, and they are in this together.