This Morning host Alison Hammond was partnered with Aljaz Skorjanec in the 2014 and unfortunately the pair didn’t make it to the final. Alison was super excited to see Aljaz as they chatted about his upcoming show Here Comes The Boys however she wasn’t expecting his surprise.

When asked what he had been doing in lockdown ahead of the show, he replied: “I’ve been doing one thing Alison, one thing.

“If you can see I’m starting to sweat, it’s for one simple reason.

“I have been wearing this T-shirt every day through lockdown and today is the day I can finally revealed it.

“It’s been a year Alison,” he said as he unzipped his jacket to reveal a top with a photo of Alison on the front. 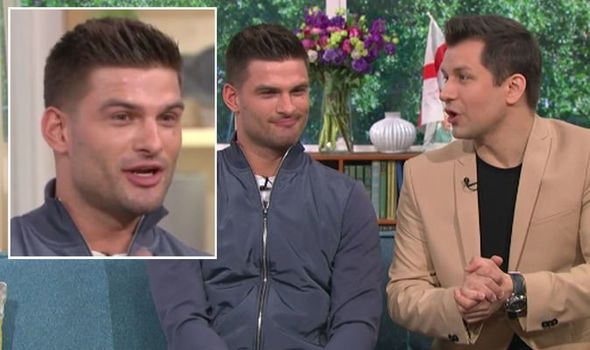 As Alison laughed: “What does it say?” as Aljaz replied: “It doesn’t actually say anything.”

The host continued to laughing as he continued: “This is why I have been sweating the whole time.”

Her co-shot Dermot O’Leary asked if the pair text one another and stay in touch.

Clearly unimpressed, Alison revealed she does message the Strictly professional but he often ignores her. 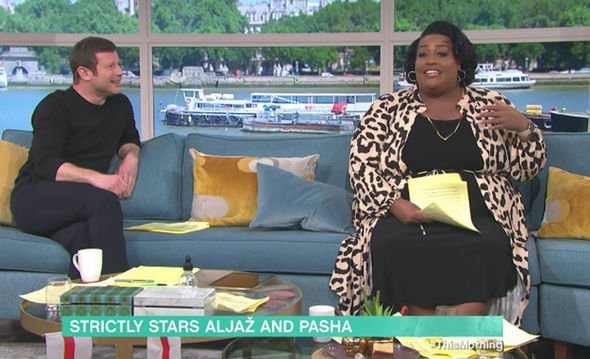 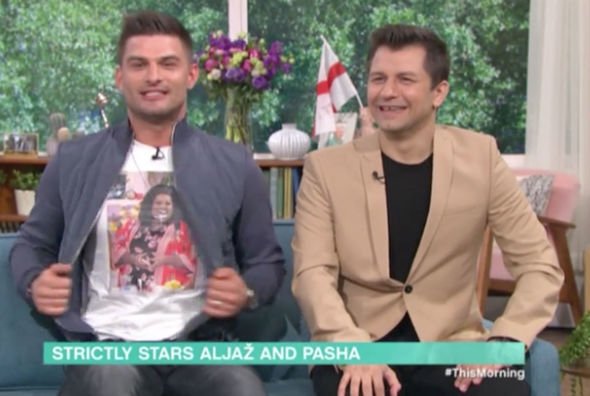 “I text him all the time and he ignores me,” she disclosed.

Alison went on to reveal she has to text his wife Janette Manrara in order to get a reply.

However she did admit Aljaz will send her videos of himself dancing to songs they performed to together.

Aljaz and Pasha will both be appearing in one of the first shows to hit the West End this summer.

Karim Zeroual who previously made it to the Strictly Come Dancing final will host.

Explaining the show, Aljaz said: “It’s the best night out in time you are going to get in the West End this year.

“It’s going to be something for everyone. All the boys battling it out on stage.”

He continued: “Dancing, great music and if you like a dance battle it’s definitely for you.”

Asked who helped to choreograph the show and who took over as boss, the dancer laughed: “Our wives are always the boss.

“Of course she is the boss,” but added: “We have a creative team.”

This Morning airs weekdays on ITV at 10am.