WWE inducted Ozzy Osbourne and William Shatner into the Hall of Fame following their cameo appearances in the show.

The Black Sabbath hero appeared at the second edition of Wrestlemania in 1986, to manage The British Bulldogs to a tag-team victory. 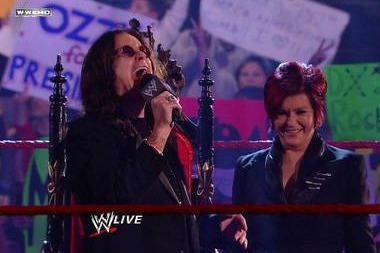 And the 72-year-old would later appear for a musical appearance at a 2007 SmackDown recording and as a special guest host for a 2009 Raw episode.

Osbourne was joined at the induction by Star Trek icon William Shatner when the show aired on Tuesday night.

In 1995, he appeared in King's Court and then a week later hopped into the ring while standing in The Hitman's corner.

During a fight with Jeff Jarrett, the actor, 90, leapt up to tackle Road Dogg after he had intervened in the fight on behalf of Jarrett.

Shatner dramatically downed the wrestler and threw him out of the ring.

The Hall of Fame ceremony was an amalgamation of the 2020 and 2021 inductees, following the cancellation of last year's event.

The show was recorded last week with Osbourne appearing via a video message.

According to Fightful Select, Batista was removed from the 2020 list because WWE prefers to induct him 'when a full crowd can enjoy it”.