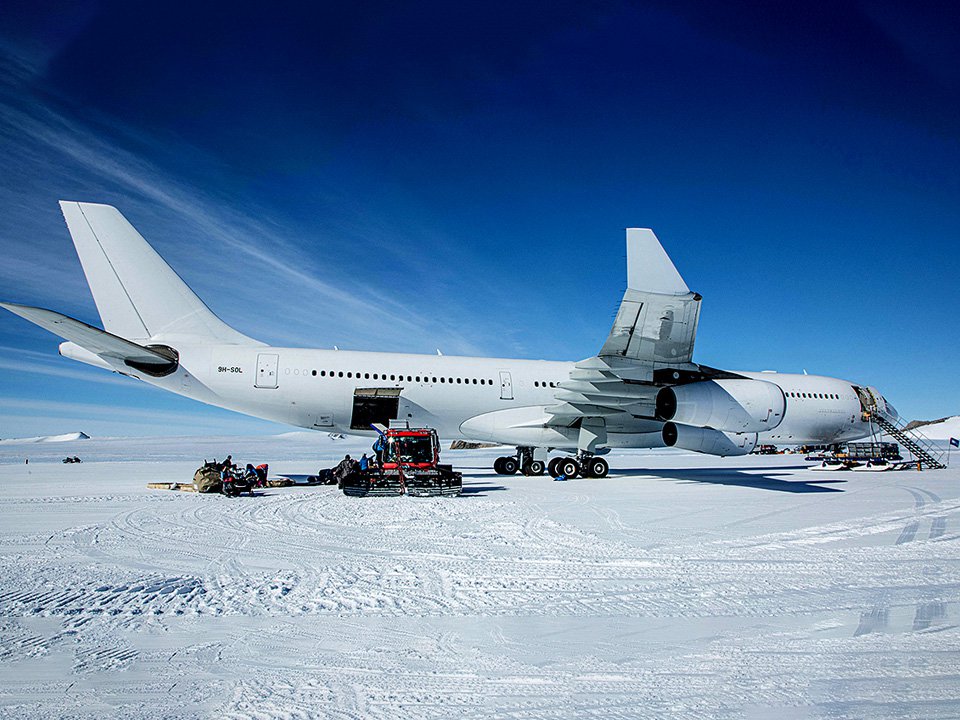 For the first time in history, an Airbus A340 plane has landed on Antarctica.

Hi Fly, a boutique aviation company, that specializes in hiring out both aircraft and crew, was responsible for the flight.

The Airbus A340 is a long-range, wide-body passenger jet airliner developed and produced by the European aerospace company Airbus.

This was the first time an Airbus A340 place landed on an Antarctic blue glacial ice runway.

Captain Mirpuri and his crew flew the 2,500 nautical mile journey from Cape Town to Antarctica and back, flying for just over five hours each way.

‘Grooving is carved along the runway by special equipment, and after cleaning and carving we get an adequate braking coefficient; the runway being 3,000 meters long, landing and stopping an A340 that heavy on that airfield wouldn’t be a problem,’ wrote Captain Mirpuri in his Captain’s log.

The team spent less than three hours on the ground in Antarctica, ‘as this was the very first flight, with limited support on the ground’, according to Captain Mirpuri who is also the vice president of Hi Fly.

Despite not technically being an airport, the blue-ice runway at the Wolf’s Fang property is designated a C Level airport.

This means that only highly specialized crew can fly there due to challenging conditions where the blue ice can be concerning for pilots because of its glare.

‘The reflection is tremendous, and proper eyewear helps you adjust your eyes between the outside view and the instrumentation. The non-flying pilot has an important role in making the usual plus extra callouts, especially in the late stages of the approach,’ added Captain Mirpuri.

The aircraft will be used this season to fly a small number of tourists, scientists and essential cargo to Antarctica.

According to the aviation website Simple Flying notes, the Russian Antarctic research station organized a half-dozen trial flights to their 3,000-foot blue ice runway between 2019 and 2020. Those were carried out by wide-body aircraft as well.

Since the vast majority of people get to Antarctica via ship, the A340 landing on an ice runway signals more such landings in the future.