The West Coast Fever netball club has been fined $300,000 and will lose 12 competition points for next season, after breaching the salary cap across the 2018 and 2019 super netball season. 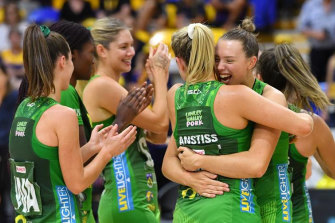 The investigation found no evidence that any current West Coast Fever players or coaching staff, including new Diamonds coach Stacey Marinkovich, were aware of the breaches.

“There is no room for this behaviour within our sport and the Commission is disappointed to have to hand down these sanctions," she said.

"We obviously hope it never happens again…this is a very disappointing day for the league."

In October, Netball WA chief executive and West Coast Fever managing director Simon Taylor resigned but is not believed to be involved in the breach.

"It's a very dark day for the club, everybody involved in and around the club is completely devastated.

"We will be united through this and everyone at the club is committed to helping to restore the faith of our fans and members and on making sure we give everything in season 2021."

Earlier this year, the Adelaide Thunderbirds were fined $100,000 for breaching the salary cap during the 2019 Super Netball season.

The probe confirmed the Thunderbirds had exceeded their total player payments by $22,698 for the 2019 season.