Zhang, the first UFC champion from China, made the first defense of her Strawweight title against Polish opponent Jedrzejczyk at the T-Mobile Arena in Las Vegas on Saturday, March 7 — her 21st win in a row.

But victory came at a cost.

The 30-year-old won a split decision over the challenger but neither fighter could attend the post-fight press conference as both were hospitalized, according to Yahoo.

The fight was chaos. Even from the opening round the athletes brought carnage to the Octagon, throwing fists and kicks at each other with reckless abandon.

Both fighters landed 30 strikes in the opening round, 38 in the third, and 40 in the fourth, while Jedrzejczyk out-landed the champion in rounds two and five.

Though the challenger had a clear advantage in activity, it was Zhang who showed superior power. She stunned Jedrzejczyk with a hard right in the second, snapped her head back with a left in the third, and then landed a monstrous right midway through the fight which caused a nasty, fight-changing swelling on Jedrzejczyk's forehead. 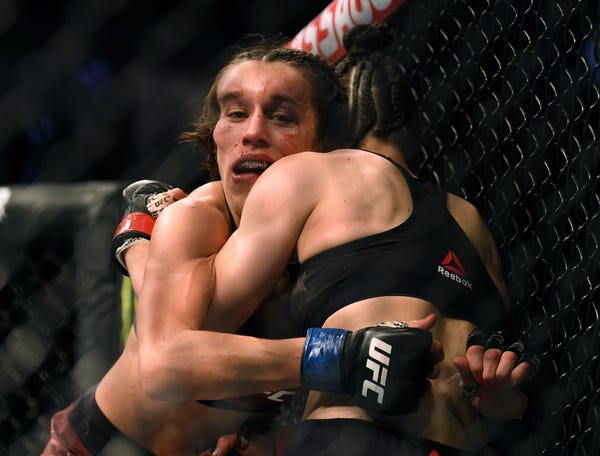 Both fighters threw with bad intentions throughout the fight and Jedrzejczyk had success with head kicks, elbows, and powerful rights, but did so with a face that had been changed completely because of Zhang's heavy hands.

Their performance through five rounds had the Vegas crowd on their feet, giving both competitors a standing ovation.

Watch some of the violence here:

After the close fight, which the judges gave to Zhang, the UFC commentator Joe Rogan said watching it from Octagonside was akin to being on a drug.

The Zhang and Jedrzejczyk fight was so good it would not be surprising to see the UFC book a rematch. 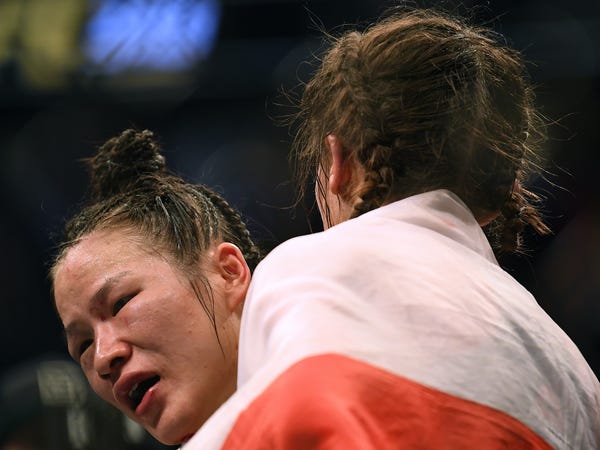 But it might not be for a while yet because after 165 landed strikes for Zhang and 186 for Jedrzejczyk, both fighters were transported to a local hospital, according to Yahoo.